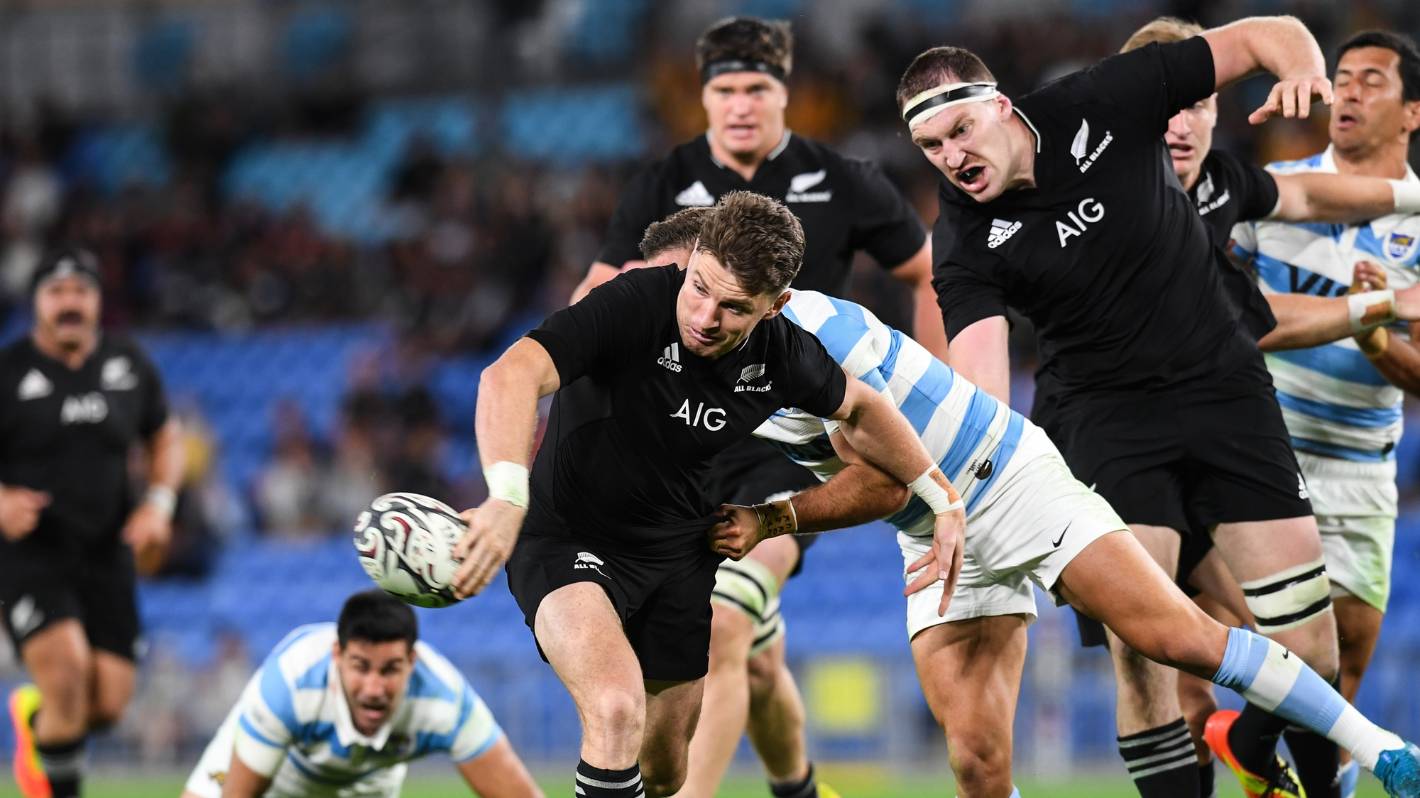 Beauden Barrett gets away his outrageous one-handed flick pass to Luke Jacobson to set up a try against Argentina.

The All Blacks have some serious thinking to do around star playmaker Beauden Barrett in Queensland this week as he nurses a niggling calf problem that threatens to boil over into something decidedly more serious.

Both Barrett and coach Ian Foster played down the extent of the problem after Sunday’s 39-0 victory over the Pumas at Cbus Super Stadium that saw the New Zealanders go five points clear at the top of the Rugby Championship standings at the halfway point of the competition.

The 30-year-old No 10 played 49 minutes against Argentina before being replaced by Damian McKenzie, and immediately iced his calf as soon as he hit the bench. He took the All Blacks’ first three shots at goal in the first half (slotting two), and then ceded the job to his brother Jordie late in the spell when he felt some discomfort.

The All Blacks were totally dominant against Argentina on the Gold Coast for their third win of the Rugby Championship.

“It tightened up, and there was a bit more cramp – same as last week,” said Foster after the game. “He’s playing well and I’m really pleased with him.”

Barrett was asked about the calf after the game and did his best to play the seriousness of the situation down. “After last week I’m still struggling with something, but maybe it’s just old age,” he said.

Of course, dealing with a chronic leg problem is not new for Barrett. He revealed last year he had been working through a troublesome Achilles tendon issue for 18 months and was only able to play by “managing my load in training weeks”.

And Barrett has been well handled by the All Blacks this season, playing in just 287 of a possible 560 minutes of test rugby. He has started just three of the team’s seven tests this campaign, and only gone the full 80 twice – in Dunedin against Fiji and in Perth against the Wallabies.

But here’s where the situation gets a little serious: with first-choice No 10 Richie Mo’unga remaining in New Zealand for the birth of his second child (and now due to fly out to rejoin the All Blacks on Tuesday), Barrett has been left as the sole specialist No 10 in the touring party, with McKenzie covering the spot.

Foster will need Barrett to start the September 25 clash against the Springboks in Townsville, and most likely the rematch the following week back on the Gold Coast which could potentially decide the championship.

Mo’unga will only get out of hard quarantine in Queensland on the Tuesday of that final test against the Boks and it is highly unlikely he would be handed a starting role on the back of such a limited test buildup. And Barrett is playing well, with Sunday’s display against the Pumas arguably his best of the season, highlighted by his outrageous one-handed flick pass in the tackle to set up Luke Jacobson’s first try.

So that leaves Foster with a bit to think about around how he manages Barrett this week, with just a six-day turnaround. This would be a sensible juncture to rest Barrett anyway, with Foster saying last week he was not planning on anyone playing five straight tests in Australia.

And given Barrett’s niggling calf issue, that plan makes even more sense, with McKenzie more than capable of starting at No 10 against the Pumas, and David Havili and Jordie Barrett managing any backup requirements between them.

It’s not as though Foster does not have a team travelling well either. The All Blacks are now the only unbeaten team in the championship after the Springboks’ shock 28-26 defeat to the Wallabies at Cbus, and could well sew up the title over the next two weeks if they continue on their way.

The New Zealanders are a perfect 7-0 in 2021 and have scored 57 tries in those tests at an incredible average of 8.14 per game. Their average winning score for the year is 55-15 and they have looked a class apart from their rivals thus far in the championship.

Foster was especially pleased with the different nature of Sunday’s shutout of the Pumas who were happy to play the spoiler role to shut down the All Blacks’ usual high-tempo attack. He praised the patience and clinical approach of his side, particularly in the face of some pretty persistent offending at the breakdown.

“We’ve done a lot of work on Argentina, on what they’ve been delivering this year. Largely they’ve been pretty impressive, particularly on defence. I’m pretty pleased with the way we went about it. I like the way our defence is building, and we’re getting a good attitude there. That bodes well for what is still a long year in front of us.”

Foster should have a welcome boost of fit-again players to consider for Saturday’s Argentina rematch (10.05pm kickoff NZT). Ardie Savea and Codie Taylor are expected to be available after a precautionary approach taken over their head knocks in Perth, while Ofa Tuungafasi, Patrick Tuipulotu and Ethan de Groot could all return to full duty this week.

Plenty to think about on the selection front.