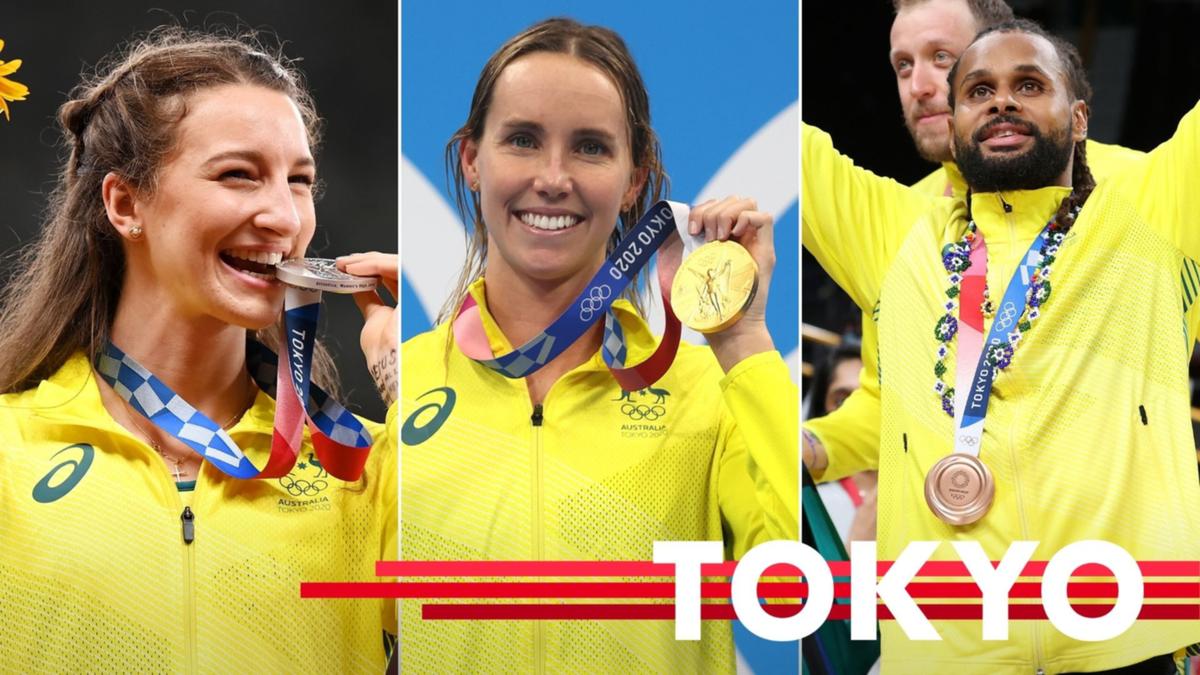 The curtain has come down on Australia’s terrific Tokyo Olympics campaign with a final medal tally of 17 gold, seven silver and 22 bronze.

Track cycling finals for Matthew Glaetzer and Annette Edmondson ended Australia’s program on Sunday as about 70 athletes prepare to march behind flagbearer Mat Belcher at the closing ceremony.

Whether it was the extra year, the relative absence of expectation, thoughts of Australians stuck at home in lockdown, the whiff teammates’ triumphs or even Brisbane 2032, there is no doubt Tokyo 2020 was a huge success.

Chesterman, the Australian Olympic Committee (AOC) and sporting bodies may never distil the secret but there was something undeniably remarkable and rousing about their charges’ performance at Tokyo 2020.

Midway through the 14th of 17 days in Tokyo, Australia surpassed its Sydney 2000 haul and drew level with its all-time benchmark of 17 golds at Athens 2004.

Australia ranked sixth on the medal table, with a teary Chesterman applauding his team for feeling “comfortable being in the uncomfortable” amid disruptions and doubt that cloaked the first-ever delayed Olympics.

Chesterman delighted in other statistics – 46 medals from 15 sports, 59 per cent of medallists on Olympic debut, and 118 Australians finishing fourth or fifth across individual and team events.

Every Olympian – here and abroad – told a different story of how the coronavirus pandemic affected their preparation.

Alex de Minaur, understandably devastated after his last-minute positive coronavirus test, was burdened by the pandemic more than any other of almost 500 Australian Olympians.

Fortress Australia meant the country went unrepresented in synchronised diving events at these Games, while shooters and others lacked international competition for 18 months.

However, the Kookaburras went within a whisker of their first men’s hockey gold medal since 2004 despite lacking rivals’ tune-ups.

And a gold rush in the pool arguably reflected, among other things, the relative normality that many Australians enjoyed compared to counterparts during the past 18 months.

Harder to quantify is the impact of camaraderie in the athletes village, which by all accounts was of a genuine level that surpassed Oi-Oi-Oi cliches – and certainly that of the past two Games.

Chesterman joked the AOC won’t get “away without having a barista” at future Games, acknowledging the effect of bringing nutrition, ice baths and as many services as possible under his green-and-gold umbrella.

“That created lots of spaces where people crossed over … people tell me the feeling we created in the village did have an impact,” he said.

Even harder to quantify is competitors’ knowledge that millions of Australians were living vicariously through their Olympians even more than usual, desperate for a distraction from depressing COVID-19 lockdowns and a vaccine rollout pace akin to that of Eric Moussambani at Sydney 2000.

“It’s really sad … we can hopefully bring some excitement to the loungerooms,” Ariarne Titmus said after her second gold medal.

Millions felt the gamut of emotions, ranging from Dean Boxall’s voracious celebration of Titmus’ triumph to the heartwarming embrace of accomplishment between Patty Mills and Brian Goorjian, while the highlights package was varied and voluminous.

Jessica Fox’s gold medal was a victory on two fronts at what bigwigs spruiked was the first first gender-balanced Games, having been among the female canoeists to successfully lobby for that race’s elevation to Olympic status.

The hour of power in which Australia’s male and female coxless fours won gold before Titmus bettered Katie Ledecky in the 200m freestyle was incredible, only to be topped by Super Sunday’s record-breaking four gold medals spread across swimming, BMX and sailing.

“Success breeds success, everyone rode the wave of our early results,” Chesterman said.

Mills, who headlined Australia’s largest Indigenous contingent at any Games, personified leadership on and off the court while carrying the flag then the lifting Boomers to their first Olympic medal.

Think Peter Bol’s two laps and crowded house of supporters in Perth, Cedric Dubler’s metaphorical dragging of fellow decathlete Ashley Moloney to the finish line and bronze, and the grace in which so many athletes handled heartbreak or setback – such as track cyclist Alex Porter’s handlebar horror.

They are scenes that will linger longer in the memory than booze-fuelled boofheadery on one flight, which as a behavioural low point paled in comparison to the ‘Stilnox Six’ of London 2012.

But with so many youngsters setting the bar so high – and the incoming infrastructure and funding boom created by Brisbane’s successful bid – there is reason for Australians to feel bullish.