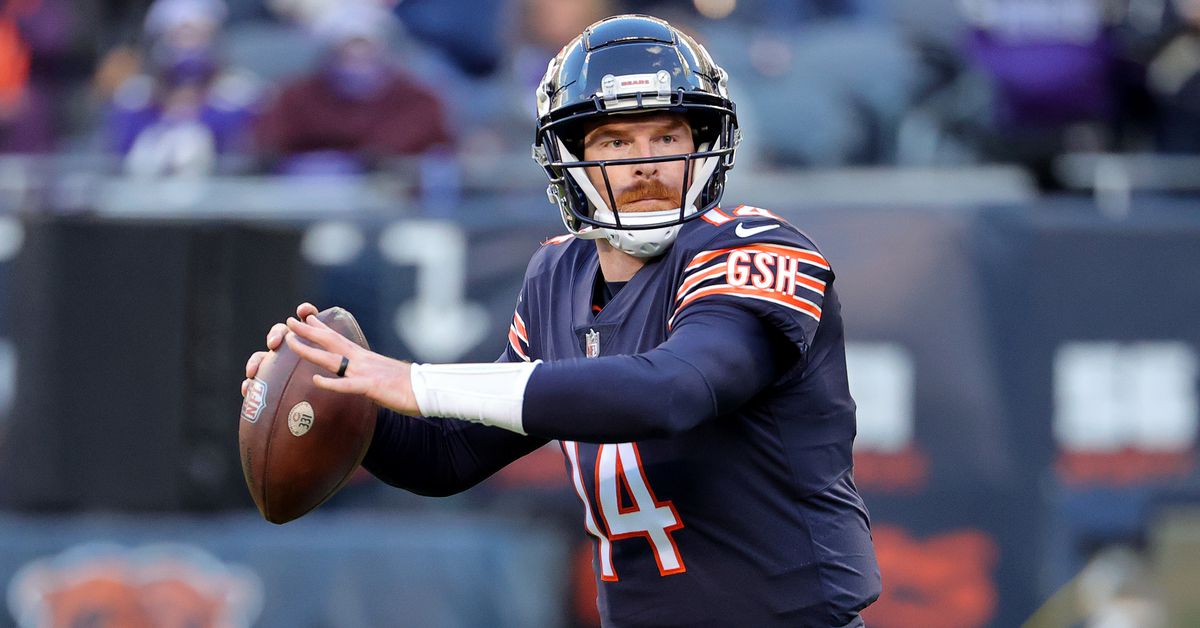 Welcome back to everyone’s least favorite game: Matt Nagy won’t say who his starting quarterback is.

As if the Bears don’t give off enough of an appearance of disorganization and dysfunction, they steered straight back into indecision after Justin Fields left the 16-13 loss to the Ravens with a rib injury and Andy Dalton replaced him.

When Nagy was asked in September whether Dalton would be reinserted as the starter once his knee was healthy, he had no reservation about making it clear that he would, though he obviously didn’t stick to that. But now, after Fields struggled against the Ravens, Nagy wouldn’t give a concrete answer despite being asked repeatedly whether Fields would start Thursday against the Lions if healthy.

“I’m not getting into any of that,” Nagy said.

When straightforward questions are met with circuitous answers, Nagy only fuels the doubt about whether he can handle this job. There are degrees of injury, so it’s reasonable that Nagy would want to see how much mobility he has before making the decision, but it should still be easy to say that it’s Fields’ job if he’s healthy.

Fields couldn’t get anything going for the Bears before his exit in the third quarter. He completed 4 of 11 passes for 79 yards and ran four times for 23 yards. It was a dispiriting follow-up to his late-game surge that nearly beat the Steelers.

His absence, however long it lasts, makes a dreary season drearier. The next two months were supposed to be about the Bears illuminating their bright future with Fields at quarterback, so this is unfortunate.

Actually, that depends on who you ask.

Dalton was happy to be back — “Had some fun out there,” he said during a press conference that had a triumphant tone — and it’s worth noting that Nagy’s original plan was to start Dalton all season and keep Fields in a gadget role. Only after Fields showed unmistakable potential in two spot starts and Nagy faced a hailstorm of criticism for intending to send him back to the bench did he relent and make Fields the permanent starter.

To his credit, Dalton sparked a Bears offense that was lifeless until he checked in midway through the third quarter. He threw a 60-yard touchdown to Darnell Mooney on his second snap, then gave the Bears a 13-9 lead on his 49-yard spiral to Marquise Goodwin on fourth-and-11 with 1:48 left.

“I want to compliment Andy Dalton for being able to come in this game in this environment and right away get going,” Nagy said. “In a crucial situation, for him to make plays the way he did shows who he is as a quarterback, who he is as a person.”

It’d be overly harsh to totally dismiss Dalton’s performance — 11 of 23 for 201 yards and two touchdowns for a 107.3 passer rating — but it’s fair to point out that both of his touchdowns were on throws that any NFL quarterback could’ve made, including Fields.

While throwing a 60-yard touchdown pass sounds splashy, it was all Mooney and the blocking. Dalton zipped a screen pass to him two yards behind the line of scrimmage, Mooney got good blocks early from tight ends Jesse James and Cole Kmet, then weaved through three would-be tacklers to reach the end zone.

On Goodwin’s score, he had five yards of separation and the Ravens had no safety deep to pick him up.

Aside from that, the offense looked the way it did when Dalton originally held the job: limited. It was the same dink-and-dunk, quick-pass scheme that wasn’t getting the Bears anywhere at the beginning of the season. And going back to that, and Dalton, won’t accomplish anything.