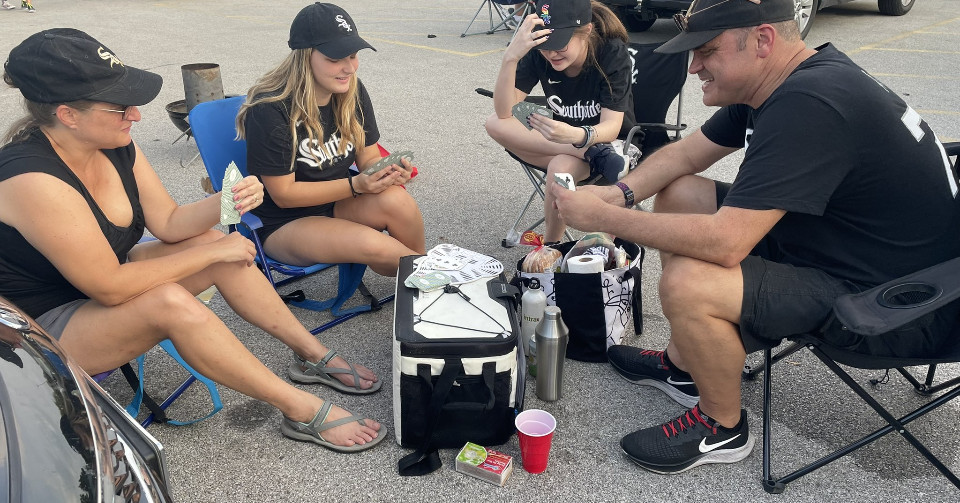 On an unseasonably warm fall night, thousands of amped-up White Sox fans ascended to the parking lots outside Guaranteed Rate Field Sunday in anticipation for the “do-or-die” Game 3 of the American League Division Series.

But the fans also relished in the camaraderie of tailgating — something that was lost last season because of the pandemic.

“I’m happy that so many fans could be here, Erice Smith said. “2020 was a really rough year for a lot of people, a lot of people lost loved ones, family and friends and to see so many Sox fans … back out here is important.”

Sally Bucciarelli, who hosted a pre-game party with her sister, said, “It feels so good to have family together tailgating. Thank you White Sox for giving us some positivity in this crazy divided world right now. They’re something we can all unite on.”

Johnny Knitter, a lifelong Sox fan from Cicero, was one of the first motorists to pull up in Lot B. Drinking a Heineken, he reflected on what the team has accomplished this year and what’s to come.

“This team isn’t going anywhere. We’re going to be playing in October for awhile, I would say for a long time, especially with our farm system and all that. So whatever happens, happens,” Knitter said before the game. “You pray for the best, and you hope for the best and you just support them while you’re here. And it doesn’t matter, my season tickets already got a down payment for next year, so I’ll be back here. This is my thing.”

Knitter said Sunday’s game was especially emotional since his brother died from cancer a year ago.

“He’ll be with me for the game, I got his ashes around my neck,” Knitter said, his voice shaking. “It means a lot for me to be here. He’s my angel in the outfield.”

As more fans joined Knitter, brats and burgers started sizzling on portable grills, the scent of charcoal dispersing into the Bridgeport air.

Elaborate food spreads and drinking games were soon arranged on plastic tables and fans of all ages played cornhole between rows of cars.

“I’m feeling pretty good. We’ve got the home fans on our side… and hopefully we’ll get something done tonight,” Elget said. “This team is so young that they don’t know what they don’t know yet. So … whichever way this goes, they’ll end up learning something from this series and they’ll be better off going forward.”

There is “no doubt” there will be more postseason games played on the South Side in the years to come,” Elget said.