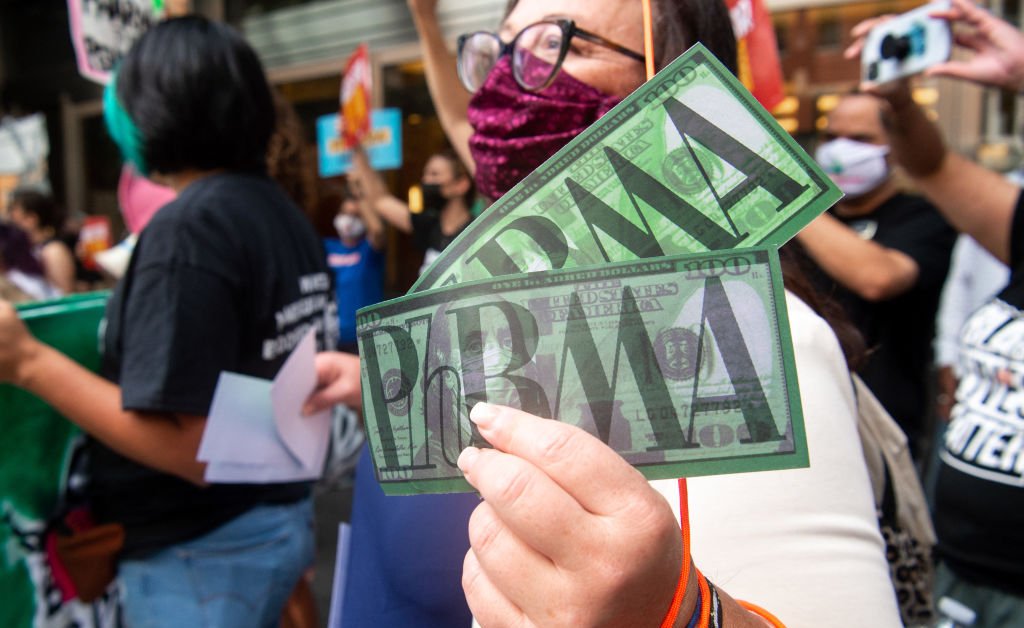 A broadly popular proposal to reduce the price of prescription drugs looks like it may get left out of the Democrats’ sweeping social spending bill. A framework released by the White House Thursday does not include the proposal at all.

Democrats had hoped to give the federal government the power to negotiate with pharmaceutical companies over drug prices—a power used by all other wealthy countries that allows them to enjoy much cheaper medications than the U.S. The proposal is overwhelmingly popular among Americans of all stripes—Democrats, Independents and Republicans alike —and President Joe Biden and dozens of Democratic lawmakers campaigned in 2020 on a promise to deliver lower drug prices this year.
[time-brightcove not-tgx=”true”]

In this context, the Democrats’ failure to include the provision in their wide-ranging social policy framework is indicative of the astonishing power of the pharmaceutical industry. Big Pharma employs roughly 1,500 lobbyists on Capitol Hill and spent more than $177 million on lobbying and campaign donations in 2021 alone.

While the industry has historically given more to Republican candidates, 60% of campaign donations this year went to Democrats. The Pharmaceutical Research and Manufacturers of America (PhRMA)—the industry’s main trade group—spent $7.44 million on lobbying during the third quarter alone, a nearly 25% increase from the same period last year.

No Republican lawmakers support the proposal to allow Medicare to negotiate drug prices and most Democrats do. But a small cadre of Democratic holdouts appear to be enough to have stopped the proposal in its tracks. Those lawmakers include Senators Kyrsten Sinema of Arizona, Bob Menendez of New Jersey, and Tom Carper of Delaware, and Rep. Scott Peters of California, Rep. Kurt Schrader of Oregon and Rep. Kathleen Rice of New York. Most were among the top recipients of money from the pharmaceutical industry.

Big Pharma’s influence is more than just manpower and deep pockets, health care insiders say. It knows how to play Washington like a game. “This is a very powerful industry with significant lobbying clout,” says Larry Levitt, executive vice president at the Kaiser Family Foundation. But it’s also “very good at knowing exactly how many votes they need to kill pieces of legislation, and figuring out a way to get those votes.”

Still time for drug prices to make a comeback

Biden’s most recent framework is not final. Two key committee chairmen said Thursday they are still pushing for the package to include a provision that would lower drug prices.

“I remain committed to finalizing an agreement that includes price negotiation, a cap on seniors’ out-of-pocket drug spending, and a penalty for Big Pharma companies that unfairly raise prices,” House Energy and Commerce Committee Chair Frank Pallone of New Jersey said in a statement on Thursday.

Senate Finance Committee Chair Ron Wyden also said he was continuing to have conversations on the drug pricing issue. “We’re staying at it. This is too important,” he told reporters.

Pallone also told reporters that if the provision did not end up in the package, the only reason would be “because of pharma and their lackeys in the Congress.”

Shortly after the White House released the outline Thursday without mention of a drug pricing plan, Politico reported that Biden had reached an agreement on the issue with Sinema, one of the holdouts who has most frustrated her colleagues throughout the spending package negotiations. The details of Biden and Sinema’s agreement remain unclear.

Reps. Peters and Schrader, both of whom have received large donations from the pharmaceutical industry, have proposed a more industry-friendly proposal. It would allow Medicare to negotiate prices—but only for medications used in outpatient services, and only after the drugs’ patents expire. That version also includes provisions that would cap out-of-pocket costs for seniors and penalize manufacturers if they raise prices beyond inflation. It stands in sharp contrast to the more sweeping plan favored by Sen. Bernie Sanders and other Democrats that would allow the government to negotiate in Medicare Part D, which covers far more drugs.

Many Democrats have been critical of Peters’ and Schrader’s slimmed down proposal. Rep. Peter Welch of Vermont, who has been a vocal supporter of the more ambitious plan, called the negotiation powers in Peters’ bill a “fig leaf” on a press call Monday, saying that it could encourage drug companies to extend patent protections further and leave consumers “at the mercy of monopoly pricing power.”

Sanders has also emphasized the need to include a significant drug pricing plan in the spending package. On Thursday, he called the omission of the drug pricing provision in Biden’s framework a “major problem.” Two days earlier, he told reporters: “Any serious reconciliation bill must include real Medicare negotiations with the pharmaceutical industry to lower the cost of prescription drugs. That’s probably the issue most on people’s minds.”

In an interview with TIME, Peters said he opposed the more aggressive drug pricing proposal on the grounds that it would hurt innovation. Pharmaceutical companies use a portion of their high revenues to fund new research.

Peters, who has received the most pharmaceutical money of any member in the House of Representatives, told TIME this week that the industry money has not influenced his views on the issue; he advocates for the interests of the tens of thousands of pharmaceutical-related jobs in his San Diego-area district. He argued that just because the prescription drug pricing provision has been popular among voters doesn’t make it the right policy. “You don’t make public policy based on polls,” he says.

He also added that his proposal has a better chance of being included in the final package. “If you don’t pass anything, you probably don’t have anything to poll,” he says. “And my bill might pass.”

Other holdouts had been waiting to see what the final drug pricing proposal would look like. Menendez, another frequent ally of the drug industry, said he would vote no on the version of the drug pricing plan that progressives prefer, but said in a statement to TIME on Wednesday that he was open to allowing Medicare to negotiate some drug prices.

If Democrats end up passing any proposal, even a modest one, that gives the government the power to negotiate drug prices, it would mark a historic shift. Big Pharma has succeeded in killing lawmakers’ attempts to regulate drug prices for decades. They beat back efforts in the 1980s; under former President Bill Clinton in the 1990s; during the creation of the Medicare drug benefit in 2003; and again during the Affordable Care Act discussions in 2009 and 2010.

Advocates who support drug pricing proposals argue that the stakes of Democrats getting this right are high. If Democratic lawmakers end up with no drug pricing proposal in this wide-ranging spending bill, they not only leave millions of Americans struggling to afford their medicines, they also miss the best chance they’ve had in decades. If Democrats fail to deliver on such a broadly popular issue, it will be a political gift for Republicans going into the tough 2022 midterm contests.

“This is the best chance Democrats have had to address high drug prices in a generation,” Levitt says. “If they lose this opportunity, another one may not come along for quite some time.”

Make sense of what matters in Washington: Sign up for the daily D.C. Brief newsletter