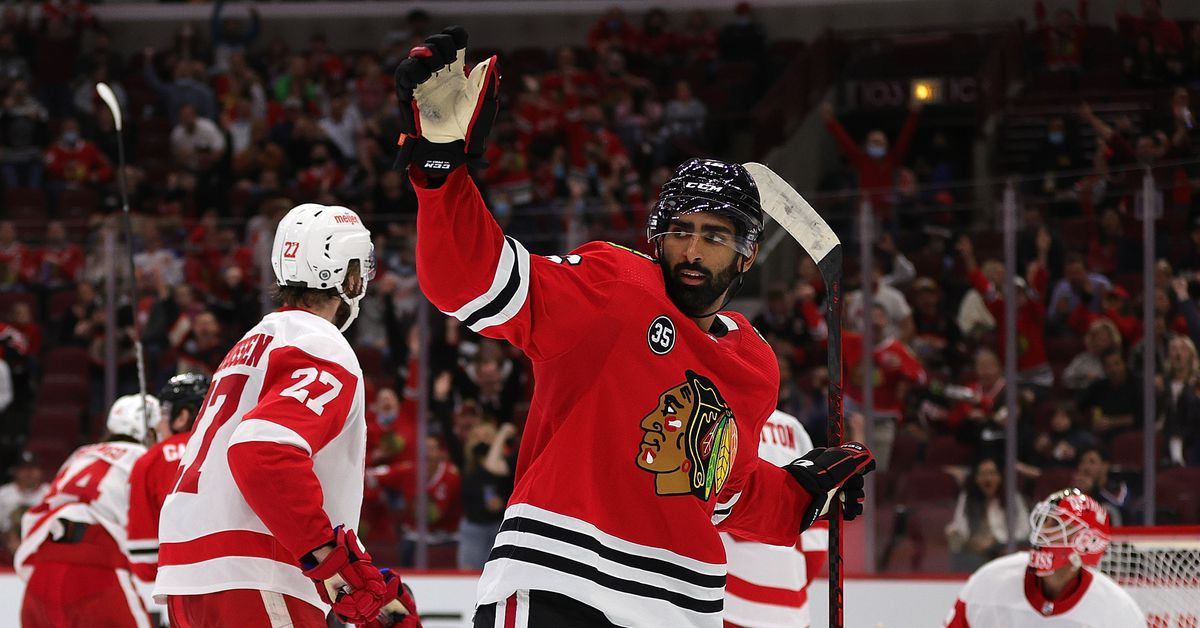 Jujhar Khaira skated out for the Blackhawks’ optional morning skate Sunday like normal.

But after just a few minutes of practice, he was pulled from the ice. Half an hour later, he and a Hawks staffer were talking in the hallway with masks on. A few hours after that, he was added to the NHL’s COVID-19 protocol, missing the Hawks’ game against the Red Wings.

Khaira’s situation exemplified just how quickly things have been changing logistically for the Hawks this weekend. Defenseman Riley Stillman was also added to COVID protocol Sunday, yet Ryan Carpenter and Erik Gustafsson — after spending Saturday on the list — were removed and played Sunday.

Patrick Kane was the one player constant on the COVID list both Saturday and Sunday, ultimately missing the game against the Red Wings — his first missed game since the 2018-19 season and only his second since 2014-15.

The Hawks had to recall defenseman Ian Mitchell from the AHL in order to even field a full lineup.

And the apparent outbreak also worsened on the coaching side. Veteran assistant Marc Crawford was added to the COVID protocol Sunday, joining assistant Tomas Mitell, who has been on the list since Thursday. The Hawks had only one typical assistant — Sheldon Brookbank — behind the bench Sunday, with Chris Kunitz filling in again, too.

“We’re just in a situation where a bunch of stuff is happening at once,” coach Jeremy Colliton said after morning skate. “We’re the team that’s dealing with right now, but that’s not to say another team won’t have to deal with it later on.

“If they end up changing the protocols, we’ll adjust. But for now, these are the rules. We’ve got to find a way to perform.”

All Hawks players and staff are vaccinated, and one’s placement in the COVID protocol does not necessarily mean he tested positive. But the merry-go-round of absent players — with the length of their absences unknown — creates a massive challenge in lineup construction nonetheless.

On Sunday, Alex DeBrincat jumped back up to the first line to replace Kane, formerly regular healthy scratches Dylan Strome and Adam Gaudette played on the third line together (flanking Henrik Borgstrom), and Saturday call-up Reese Johnson made his sixth career NHL appearance.

Positives have been hard to find in the Hawks’ first few weeks, but at least some of the initial negatives have improved. The defensive duo of Jake McCabe and Connor Murphy is one of those.

They were expected to provide the Hawks the kind of shutdown pair they’ve long needed, but on the opening road trip, they looked like nothing of the sort. McCabe struggled mightily — against the Devils, for example, he knocked what was functionally a dangerous shot into Kevin Lankinen — and Murphy committed some ugly turnovers, too.

But since returning to Chicago, Murphy and McCabe have started to gel, stifling opponents’ top lines — like they should be doing — at least on the majority of shifts.

“They’re both really good players — they’re solid defensively and have the physical element,” Colliton said Sunday. “Early on, maybe [they] could’ve played more simple, not tried to do too much, not put too much extra pressure on ourselves to make a difference with the puck on every shift. We need those two to defend.”