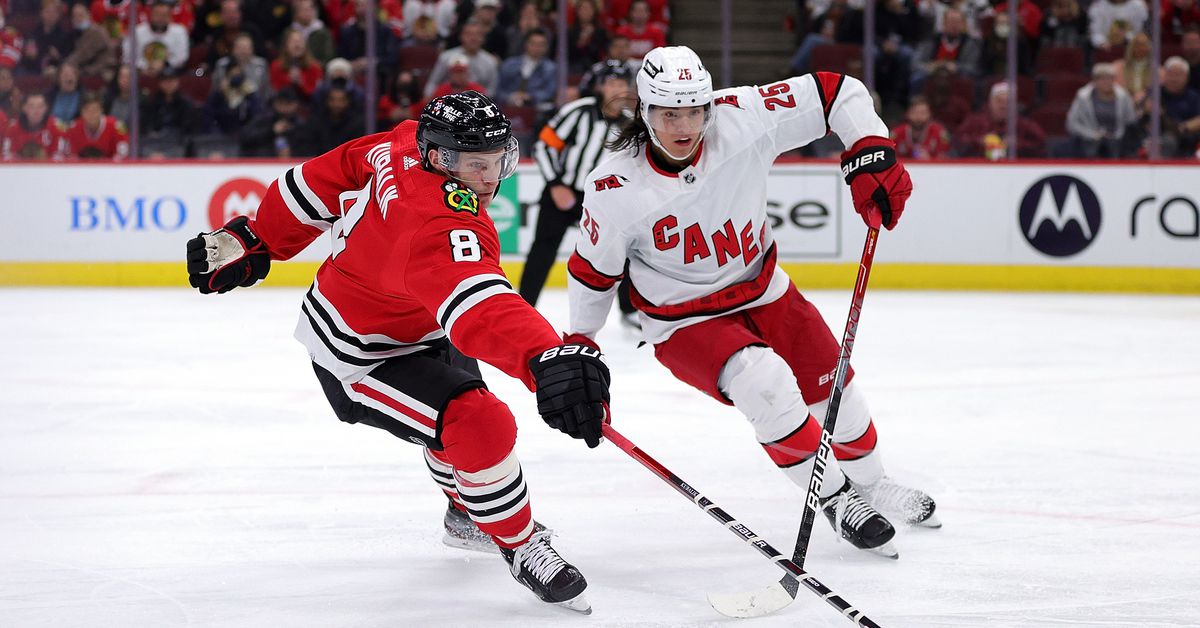 SEATTLE — In five of his 16 games this season, Hawks wing Dominik Kubalik hasn’t taken a shot on goal at even strength. In six of his 16 games, he has one or fewer shots on goal in all situations.

“That’s not a good sign for a shooter,” Kubalik admitted earlier this week.

So what’s the solution?

“I’ve just got to find a way to be in those shooting positions,” he said. “[I need to] be around the net, [even] when it hurts there but you can have easy goals. . . . [I need] this mindset that if I have a chance, the first thing I should be looking for is to shoot it.”

After scoring in each of the Hawks’ first two games, Kubalik has only one goal since and zero in his last 10 games. Only one of those three total goals happened at even strength, and all his even-strength shooting analytics are down.

Interim coach Derek King sat down with Kubalik last weekend to show him videos of shifts in which he played well — an effort to boost his confidence and take his mind off his scoring troubles.

“It helped me a lot to see some different things than shooting,” Kubalik said. “When I saw the videos, I felt like I was doing the right things, so that’s good — even away from the puck, which is my problem. [I’m] just getting my legs going, [trying to] be on the forecheck, be physical, [do] those things I just need to do automatically every shift. There are lots of positive things, and [I] just have to build off that.”

Added King: “He’s like, ‘Ah, I’ve got to score.’ [I told him] he’ll score because it’s like riding the bike. You know how to ride the bike. If you don’t ride for 10 years, you still know how. He knows how to score goals.”

Last Friday, Kubalik squandered two golden chances all alone against Coyotes goalie Scott Wedgewood, hitting the crossbar on a high-glove shot on the first chance and finding no room along the ice between Wedgewood’s pads on the second.

Kubalik has been stopped often this season while trying to go five-hole. He joked about a friend calling him after Friday’s game to say, “It’s enough.”

“I can say you guys are not going to see the five-hole for a long time now,” he said Tuesday with a smile.

He ripped another three shots Wednesday night against Kraken goalie Philipp Grubauer, all of which were considered scoring chances, yet again couldn’t find the twine.

Part of that might be goalies learning Kubalik’s tendencies better — not a surprise for someone who started his career by scoring at a pace only Jonathan Toews and Artemi Panarin have matched in recent Hawks history.

Kubalik knows it’s his duty to overcome that. The Hawks — tied for second-to-last in the NHL in even-strength goals (24 in 16 games) — will certainly benefit if he can.

“The good goal-scorers always find a way,” he said. “Everybody knows that [Capitals star Alex] Ovechkin is going to shoot the one-timer on the power play. It still goes in, looks easy. I’ve just got to find a way to make it look easy, too.”