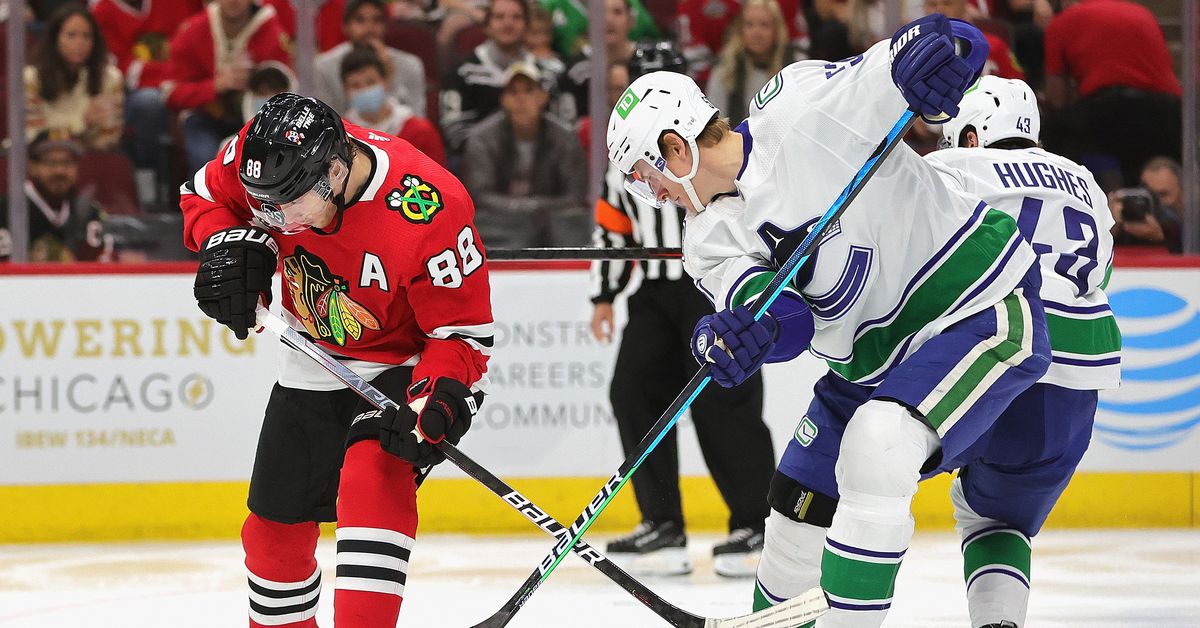 They didn’t love much else about the Blackhawks’ 4-1 loss to the Canucks, booing the team off the ice — with one woman screaming for coach Jeremy Colliton’s firing — as the Hawks dropped their fifth consecutive game to start the season.

Kane didn’t love much else, either.

“It’s obviously frustrating, but we can’t feel sorry for ourselves,” Kane said. “We’ve got to find a way to dig ourselves out of a hole… We’re pretty upbeat, as upbeat as you can be being 0-4-1. But you can’t really think about the record too much.”

The Hawks have not held a single lead for a franchise-record 301 minutes to start the season and have outright trailed for 225 of those minutes. They’ve equaled their worst start, record-wise, since 1997 — a year buried deep within the franchise’s irrelevant era.

The Hawks again played well in the first period, but conceded twice in the second period — including a five-on-three goal just before the intermission that doubled Vancouver’s lead — and didn’t push back much in the third.

“You always want to create more, especially when you’re down, but we’ve just got to keep going,” Colliton said. “It’s disappointing, obviously. But we need to win one game and then we can build some momentum from that.”

“As a team, you’re going into the third and you’re saying to yourself, ‘Try to do all the right things and keep playing the same way that we were when we were controlling parts of the game,’” Kane said. “We just probably didn’t do it enough in the third. There were a few different changes in the lines and things, but don’t think we really had the same energy.”

The pregame ceremony was decidedly louder and better-attended than the unofficial ceremony the Hawks held for him March 23, when only his teammates and family could be in attendance.

Jonathan Toews, the only man other than Kane drawing significant cheers from fans during this lackluster Hawks’ opening homestand, re-presented Kane his commemorative silver stick.

Mike Hardman’s placement into concussion protocol earlier in the day somewhat forced Colliton to remove Strome from his doghouse. Ryan Carpenter also drew into the lineup while Philipp Kurashev was somewhat surprisingly scratched.

“[Kurashev] was one of our best forwards in camp and preseason, and we need him to get back to that level,” Colliton said. “It’s obviously an opportunity for other guys to go in who are hungry for the chance and maybe they can give us a spark. But sometimes coming out is what you need to get refocused and back to the level you can play out.”