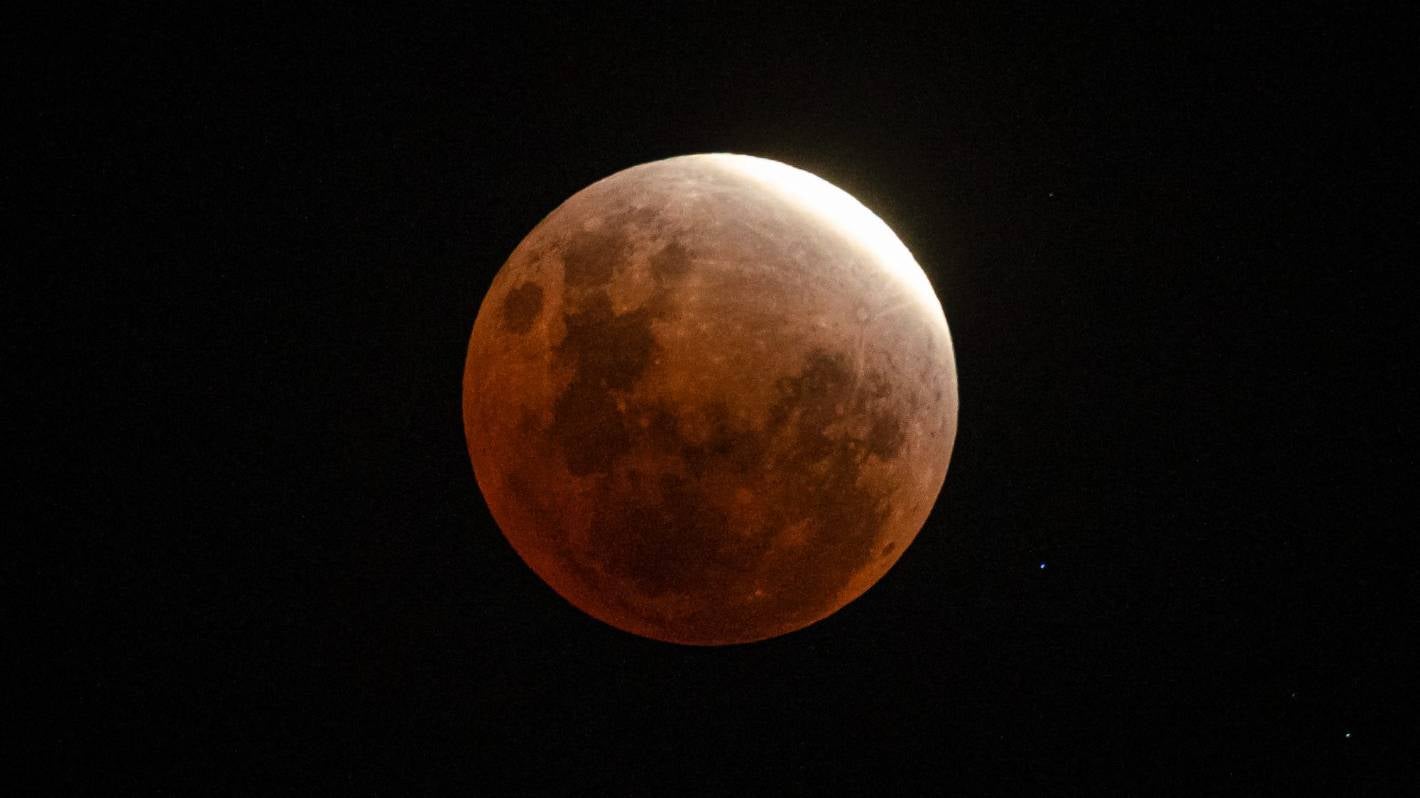 The blood micromoon over Christchurch on Friday night.

Kiwi stargazers have witnessed an unusual phenomenon in our skies: a blood micromoon, caused by the unusually long near-total lunar eclipse on Friday night.

The “blood micromoon” eclipse started after sunset at 8.20pm on Friday night, reaching its maximum at about 10.04pm – when 97 per cent of the Moon’s face was covered by the Earth’s shadow.

The partial eclipse ended about 11.48pm.

The Moon appeared to have a reddish hue for a while on Friday night, once most of its surface was in shadow. During a lunar eclipse, Earth comes between the Sun and the Moon, blocking the sunlight from falling on the Moon.

READ MORE:
* In pictures: Blood micromoon lights up Aotearoa’s night sky
* Rare blood micromoon visible tonight: Show off your photos
* Here’s why the ‘blood micromoon’ is going to be such a spectacular sight

Stardome astronomer Rob Davison​ said the country hadn’t seen a partial eclipse such as this in hundreds of years.

The totality of May’s eclipse lasted for about 14 minutes, whereas this one was due to last about three hours and 28 minutes – making it the longest partial lunar eclipse in Aotearoa since the year 1212.

The partial eclipse seen above NZ hundreds of years ago also had about 97 per cent coverage and was seconds longer, Davison said.

Weather forecasters expected skies over much of the country would be clear ahead of the partial eclipse, or have only limited amounts of cloud during that time, except in the south of the South Island.

Those who could see the sky should be able to see the Moon’s change of colour wherever they were, Royal Astronomical Society of New Zealand president Steve Butler said earlier.

“Certainly if you can get away from the urban lights you will get a better view.

“I think it could be quite spectacular looking east from the coast,” Butler said before the eclipse. “If you can see it coming up over the horizon, that would be one of the prime places I would head for.”

The event was called a micromoon, because the Earth will be around its apogee, the furthest point of its orbit from the Earth.

“But if you’re looking directly with your eyes, there’s a fair chance you won’t notice any difference,” he said.

Your brain would also see the Moon as bigger when it was close to the horizon, particularly if something, such as trees or hills, were in the foreground.

“As it climbs into the sky, even though it’s probably marginally closer to you, the brain tells you it’s further away, so the impression is it’s smaller,” Butler said.

The first shots of the supermoon rising into the skies before a total lunar eclipse in May.

The partial lunar eclipse was the second such event in 2021.

In May this year, New Zealand was treated to a rare blood supermoon.

It was the first time the country had seen such a phenomenon in 40 years.