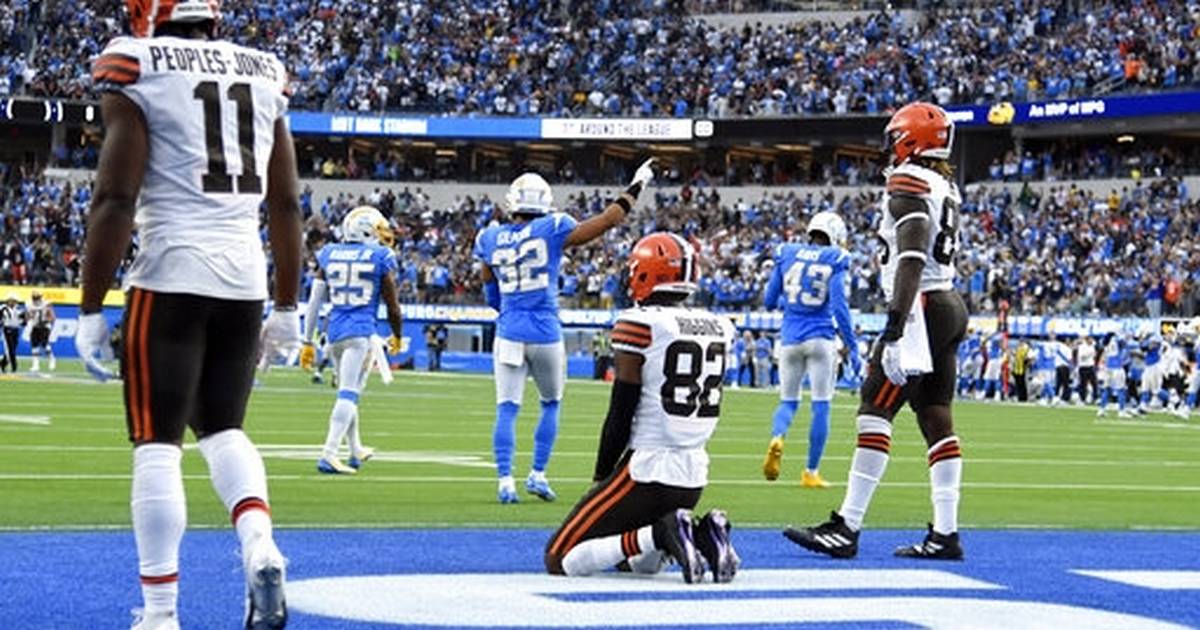 INGLEWOOD, Calif. — The Cleveland Browns have twice built double-digit leads on the road against quality teams this season. And twice, they squandered those leads and lost.

Sunday was the latest disappointment for the Browns as they were up 14 points early in the third quarter, yet lost to the Los Angeles Chargers, 47-42.

Behind the Browns’ electric running game and Chargers quarterback Justin Herbert’s fantastic play, the game turned into a wild shootout and that didn’t bode well for the injury-plagued Browns. The Chargers scored 26 fourth-quarter points and converted three fourth-down plays; they had another fourth-down play aided by a penalty. The Browns, who were already thin due to injuries, suffered more and were left searching for answers.

‘They played a good game and we didn’t come through there in a couple spots,’ coach Kevin Stefanski said. ‘I’m sure there’s about a thousand reasons why, but we have to make sure we make those corrections from this game and then move on. We have an undefeated team (Arizona Cardinals) coming to our place next week.’

After the Chargers missed an extra point to remain behind 42041, the Browns seemed to be in business with a one-point lead and 3:08 left. On that second-to last offensive series, the Browns went three-and-out. The Browns gave the ball back to Herbert and the red-hot Chargers offense, and they made them pay for it.

‘We obviously wanted to score,’ Stefanski said. ‘Ran it on first down. Second down, we tried to get a double move on their corner. We really wanted the clock to run there, as well. That was incomplete.”

Mayfield thought there should’ve been a pass interference call on the second-down pass attempt to Rashard Higgins.

‘We asked the ref how the hell he missed that call,’ Mayfield said. ‘They’re shoving Donovan Peoples-Jones out of bounds and Higgy gets grabbed, so there’s two PIs on one play and they don’t call it. We shouldn’t be in that position.”

The Browns had a season-high 531 yards offensively and ran the ball at will with the tandem of Nick Chubb and Kareem Hunt. Cleveland had 230 rushing yards and Chubb had 161 yards on 21 carries (7.7 yards per carry) and scored one touchdown. Hunt scored twice and had 61 yards on 12 carries.

‘Our rushing attack, week in and week out, is one of the best in the league,’ Mayfield said. ‘We leaned on that today. Passed the ball when we needed to. We didn’t make the plays we needed to to win.”

Rookie linebacker Jeremiah Owusu-Koramoah suffered a throat contusion and was taken to a local hospital after the game, according to a team spokesman, as a precaution. Defensive end Jadeveon Clowney (elbow) didn’t play and neither did offensive tackle Jedrick Willis Jr. (ankle). Cleveland was already thin in the secondary with rookie cornerback Greg Newsome II inactive.

Then cornerbacks Denzel Ward (neck) and Greedy Williams (right shoulder) were injured during the first half and didn’t return. The Browns were missing both starting tackles after right tackle Jack Conklin suffered a knee injury in the third quarter. Safety M.J. Stewart had a hamstring injury in the second half and did not return. Ward, Williams, Conklin and Stewart are scheduled to get MRIs on Monday.