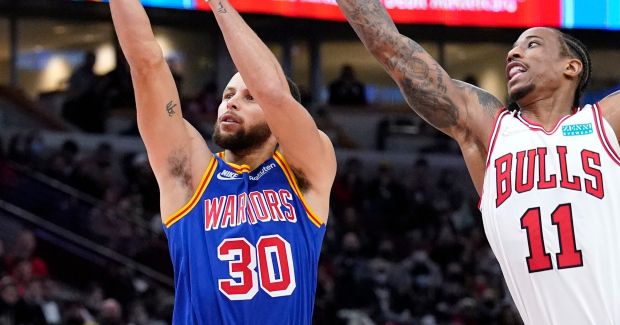 LaVine had grabbed a rebound three-plus minutes into the Bulls’ game Friday against the Warriors, spun to try to get out of trouble and felt something in his left knee that forced him to foul immediately so that he could stop the action and head straight to the locker room.

He eventually was ruled out for the rest of the game and was headed for an MRI exam, but the initial belief was that it was only further discomfort in the knee, which had been sore for a few games. It’s the same knee on which LaVine required surgery on his anterior cruciate ligament in February 2017.

Coach Billy Donovan ruled LaVine out of traveling to Boston for the start of a two-game trip Saturday, but he offered up little more than that.

‘‘I don’t know how severe it is or isn’t,’’ Donovan said. ‘‘I think the MRI will tell a lot [Saturday]. Before I speculate or guess, I just don’t know until he gets the MRI.’’

LaVine’s injury left the Bulls facing a Warriors team that was without Draymond Green and Klay Thompson, and they turned in a second consecutive embarrassing performance. They followed up a lackluster second half Wednesday against the Nets with a full-game meltdown in a 138-96 loss to the Warriors in a second consecutive nationally televised game at the United Center.

The primary culprit against the Warriors was the lackluster defense, which allowed 37 points in the first quarter and 41 in the second.

Not only were the Bulls outscored 41-19 in the second quarter, but they turned the ball over seven times, allowed the Warriors to shoot 60.7% from the field, were outrebounded 14-6 and shot 1-for-7 from three-point range in the period.

The Bulls became the first team in NBA history to lead their conference and lose back-to-back home games by 25 points or more.

‘‘It’s definitely a learning experience for us all on just what to expect,’’ veteran forward DeMar DeRozan said. ‘‘We just got our butts kicked two [games] in a row, and now it’s about how we respond. We’re going to see what we’re made of.

‘‘Nobody is going to come save the day; it’s on us. These two games should be all the motivation we need.’’

As far as help coming before the trade deadline Feb. 10, Donovan wasn’t about to go there yet. He speaks with executive vice president of basketball operations Arturas Karnisovas and general manager Marc Eversley almost daily and said that all remained pretty quiet on that front so far.

‘‘We kind of talked and evaluated our team with where we’re at, and I think Arturas has mentioned publicly that he’s going to do whatever he can do to help the group,’’ Donovan said. ‘‘I have not gotten into specifics as it relates to players, the trade deadline. . . . His comment to me — Arturas — was: ‘Listen, as we get closer to this, we’ll fill you in.’ I didn’t get a sense that much was going on.

‘‘I think Arturas is looking at all those things, but there’s been no, ‘Hey, we’ve got to do this now.’ As Arturas has mentioned, the chemistry on the team is really good. And I think with the chemistry being as good as it is, you want to make sure that whatever you’re doing that the chemistry continues moving forward.’’