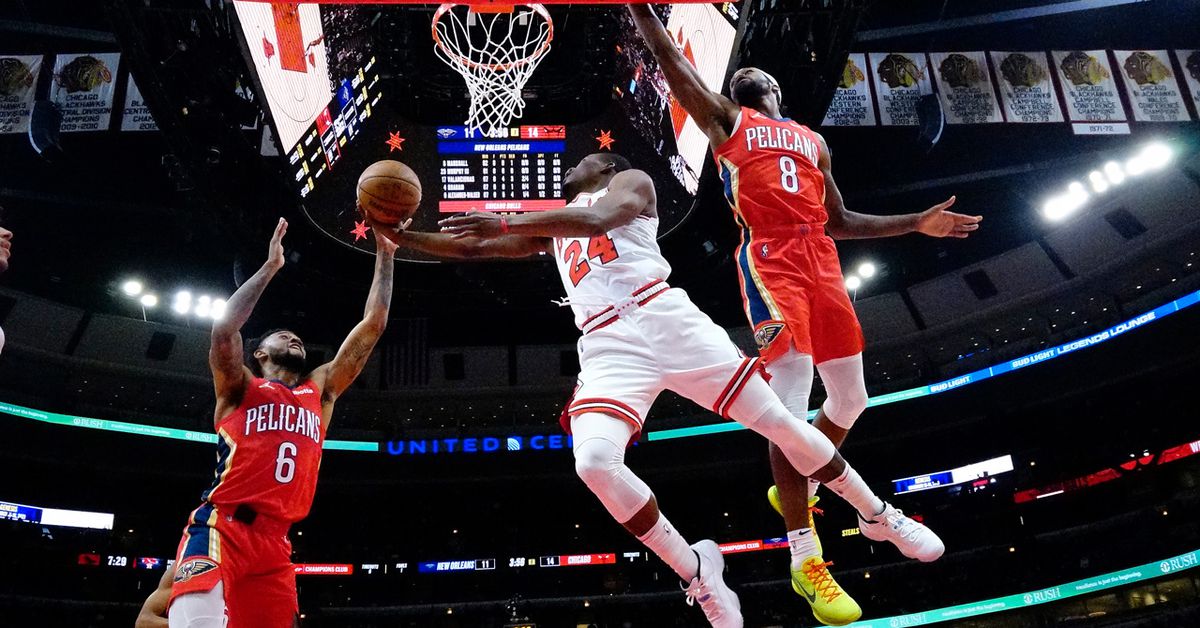 The “MVP … MVP … ‘’ chants already started in Friday’s home opener at the United Center, showered down on Zach LaVine when he stood at the free throw line, but also in the direction of Alex Caruso.

When Lonzo Ball was asked if it was a bit too early for that chant to be starting up, especially for Caruso, the Bulls point guard smirked and said, “Hey man, he’s got my support.’’

While LaVine has been a fan favorite for years, and Caruso is on the come-up, don’t discount how Javonte Green has been embraced by the Bulls faithful ever since the versatile wing was getting the starting nod over a then-injured Patrick Williams in the preseason.

According to LaVine, however, Green’s been a favorite of his since he came over in a March trade deadline deal last season.

“That’s my dog right there,’’ LaVine said of Green. “He brings that dog mentality to the game, do whatever for the team, sacrifice his body, run the floor, do all the dirty work. Great guy on and off the floor. His energy is infectious.’’

And some of the dunks he’s had have been ridiculous. LaVine said what’s seen from Green in the games is what he does all the time in practice.

“He damn near does dunk everything in practice,’’ LaVine said of Green.

What really matters to the starters is that Green – like most of the second unit – pushes them in practice and brings energy come game time.

“He’s one of the biggest energy guys we have,’’ guard Ball said of Green. “Not only running the lane but playing defense. He can guard a lot of different positions, and he uses his hands very well as well. We definitely feed off of that when he comes into the game.’’

That’s why Green could be a key reserve moving forward this season. He’s a great defender, can guard multiple positions, but also showed that he worked well with the starters if there’s an injury or a lineup change.

“The one thing with Javonte when he is in the game you just feel him with the way he flies around, challenges shots, he runs the floor, slashes, gets on the glass,’’ coach Billy Donovan said. “You can just feel him out there.

“I trust his energy and I trust his motor, and the thing with him is he plays to who he is. He doesn’t try to do things he can’t do or he’s not good at, but what he is good at is playing with great urgency.’’

Donovan admitted that he’s looking for ways to get Williams involved in the offense, and the second-year forward offered up a suggestion, pointing out all the pick-and-roll he worked on over the summer.

“That was one of the things that me and the player development and coaching staff worked on this summer,’’ Williams said. “I felt super confident in summer league. It’s just a matter of getting in those positions.’’

Donovan said he feels good about the way he’s using his rotations throughout the preseason and the first three regular-season games, but he also cautioned that there shouldn’t be too much made of them as far as being written in pen.

Undersized Alize Johnson has been used more than Tony Bradley as the backup center, while he’s still gone back and forth with Ayo Dosunmu and Troy brown Jr.

Expect it to continue to be a work in progress.

“We’re going to need all these guys,’’ Donovan said. “During the course of a season different things happen. You’re always trying to tinker to make the group better. Sometimes the personnel you’re playing against can also have a lot to do with dictating rotations.’’