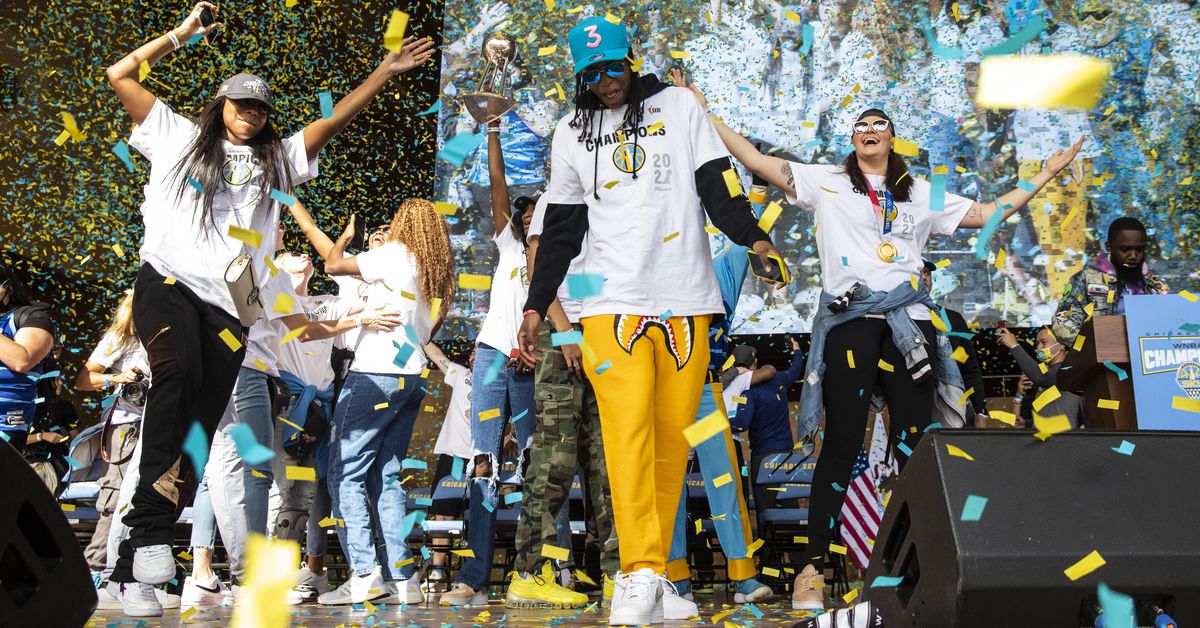 In the WNBA’s 25th anniversary season, the Sky made a playoff push that had them knocking on their first WNBA Finals door since 2014. They busted that door down, winning the franchise’s first-ever title on Sunday.

When the team met the thousands of fans who awaited them at the Jay Pritzker Pavilion after a championship parade up Michigan Avenue, Sky coach/general manager James Wade had a message.

Courtney Vandersloot walked into Wintrust Arena Tuesday morning wearing black sunglasses and a boot on her left foot. The sunglasses were maybe a style choice or maybe part of a hangover cure. The boot she wore as a precaution for her plantar fascia.

She looked tired but joyful from celebrating and the Sky’s first-ever WNBA Championship clinching win over the Phoenix Mercury on Sunday evening.

Candace Parker walked in side by side with her daughter, Lailaa, and WNBA Finals MVP Kahleah Copper was right behind them.

Two short days ago, Wintrust Arena was getting prepped to welcome 10,378 fans who would bear witness to the Sky’s 80-74, come-from-behind win over the Mercury.

“It still hasn’t set in that we won a championship,” Copper said.

When Parker won her first title with the Los Angeles Sparks in 2016, the team held a massive celebration at L.A. Live in downtown Los Angeles. There was no parade.

Mayor Lori Lightfoot announced Monday that the Sky would not only have a rally but would parade up Michigan Avenue in a five-bus championship motorcade similar to the city’s previous sports champions — all won by men’s teams.

Parker’s parents, Sara and Larry, said it isn’t special the team is being celebrated with a parade; it’s what should be expected.

Lightfoot, a Sky season ticket holder with her wife, Amy Eshleman, since the franchise’s inaugural season, said she feels lucky to be Chicago’s mayor at this moment.

Chicago has long been viewed as a basketball city with a rich history in the sport that includes elite high school competition and the Bulls’ two three-peats for six NBA titles.

Since 2006 the Sky have fought to gain a foothold in the hearts and minds of Chicago basketball fans, but largely to no avail. Tuesday, Chicago celebrated its first professional basketball championship since 1998, marking a turning point for the franchise and for women’s sports in the city.

“It’s been our dream all along to see this city embrace this team as they’ve embraced all those men’s teams forever,” Sky majority owner Michael Alter said. “We’re here to stay, and Chicago has fallen in love with this team.”

As the Sky walked out of Wintrust Arena’s loading dock and boarded buses bound for Millennium Park, different chants erupted from the hundreds of fans who lined the street.

One fan threw his Bulls hat up to Parker on the double-decker bus for her signature. With an ear-to-ear grin, she signed it in permanent marker.

As the buses loaded up, the chants grew.

Parker squeezed by passengers and made her way to the front where the cooler was.

“I need to sneak past you to get my point guard some alcohol,” Parker said. “Yo, Sloot, you want an Angry Orchard?”

Vandersloot and Quigley played a significant role in Parker’s decision to play for the Sky.

Texts were sent, Portillo’s was mailed to Los Angeles and conversations were had about this exact championship moment. When the buses finally departed Wintrust Arena all three of them were wide-eyed, taking in the fans along the route.

Vandersloot stood facing east on bus No. 2. She was hunched over the rail, staring out, waving at the people who lined Michigan Avenue when she let out a deep sigh.

There were few breaks in fans that lined the street and as the team drove by, they connected with as many as they could.

They noticed jerseys, posters and even recognized some fans from the team’s early days.

“From the beginning,” Quigley yelled to them.

When they finally arrived at Pritzker Pavilion the welcome was captivating. Fans from those early days were mixed with new ones.

Parker took the stage and addressed her home crowd, talking about the grit, grind and blue-collar values that she admires about the city.

In one season, she accomplished what she had set out to when she signed in February.

“Hey, guess what?” Parker asked the audience. “Sky in four!”

Cheers and applause rang out.