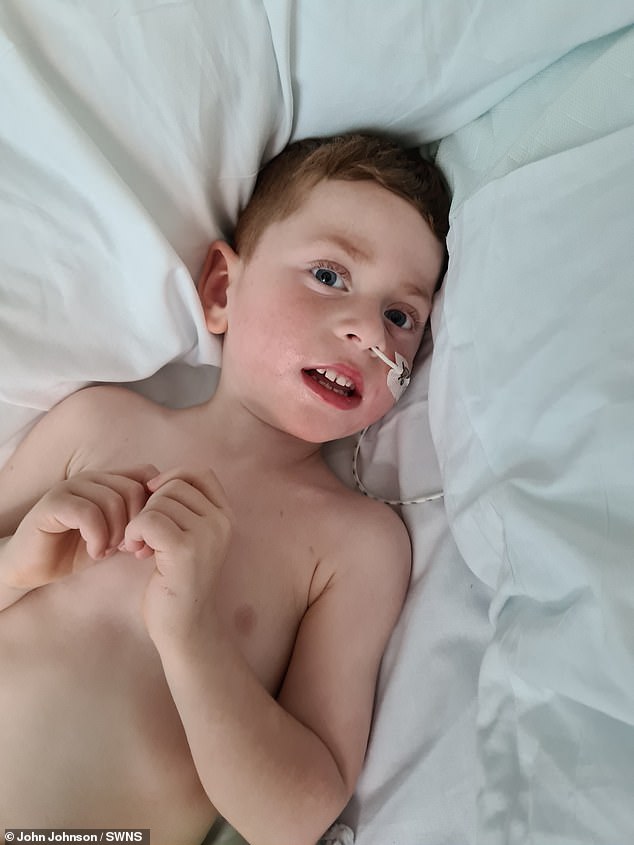 A three-year-old boy was left brain-damaged and suffering from recurring seizures after his tonsillitis triggered a one-in-a-million incurable condition.

Reggie Johnson, from Harwich in Essex, was diagnosed with the common throat infection during a GP phone appointment in May.

But he was rushed to hospital a few weeks later after suffering a seizure.

Reggie, who had no underlying health conditions, was then diagnosed with febrile infection-related epilepsy syndrome (FIRES), a rare type of epilepsy that causes him to have back-to-back seizures for 24 hours or more.

It is unclear what causes the condition but experts believe inflammation from minor infections can trigger it. It is exceptionally rare, affecting approximately one in a million children.

Reggie’s father John Johnson, 35, said his son went from being an active and happy child to being unable to speak in just a few weeks.

He now lives in a hospital bed at home, where he receives round-the-clock care from his father and mother Natalie, 37.

Reggie, a three-year-old from Essex, was diagnosed with tonsillitis in May after a telephone appointment with his doctor. After recovering from the illness, he had a seizure a few weeks later while on a family holiday 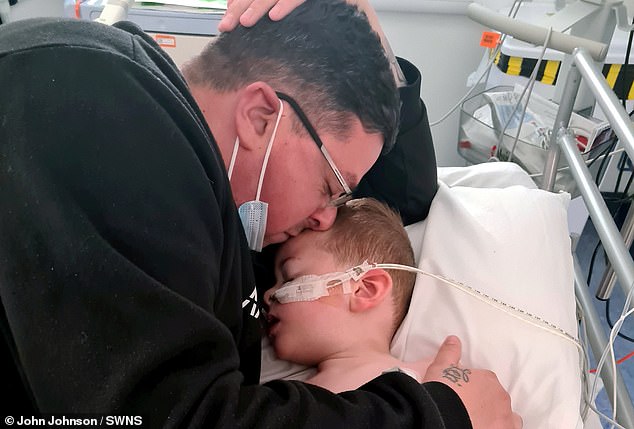 Reggie spent the next eight weeks in hospital, including three weeks in intensive care, where he suffered from constant fits. Two months later, expert medics diagnosed him with FIRES, which can cause children to have recurring seizures that last for more than 24 hours 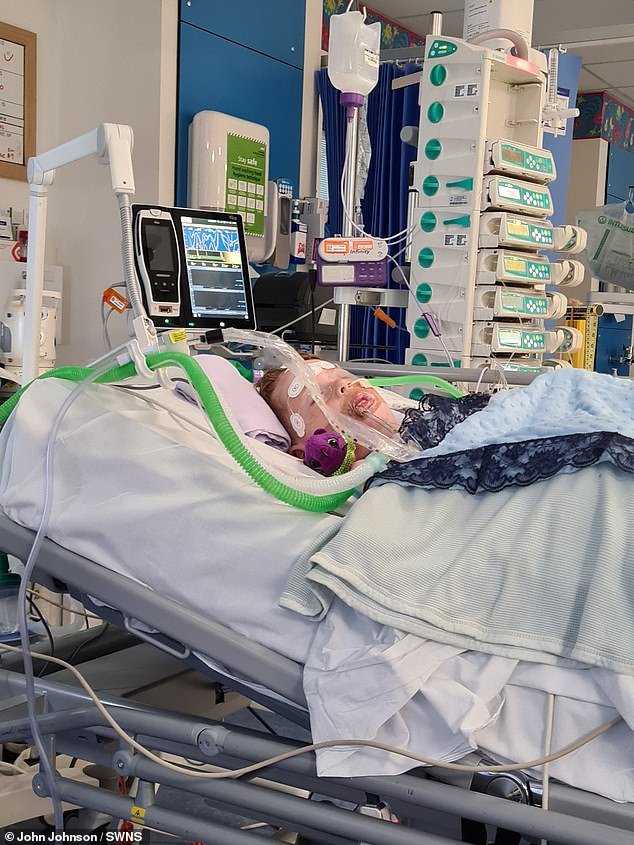 Reggie was discharged from hospital in August. He lives in a hospital bed in his living room at the family three-bed home, where his parents look after him

Reggie was diagnosed with tonsillitis in May after a telephone appointment with his doctor.

His father noticed the tell-tale white pus-filled spots at the back of his son’s throat and called the GP, who prescribed a five-day course of antibiotics.

A week later, Reggie was back to his usual self and went on a family holiday on June 4 at a local caravan site.

But the next day, while on trampolines and funfair rides, he started being sick. His parents took him back to the caravan to sleep, but he woke up and went into a seizure.

His parents immediately called an ambulance that rushed him to Colchester Hospital, where his father said Reggie suffered a ‘massive seizure’ and was ‘away with the fairies’.

What is febrile infection-related epilepsy syndrome?

The condition affects one in a million children – usually aged between two and 18 – and usually follows a minor infection in a previously healthy child.

Seizures usually start 24 hours to two weeks after the illness begins and leaves the majority of sufferers with some form of developmental disability.

Drugs used to treat the condition include benzodiazepines and barbiturates.

Doctors may also recommend a ketogenic diet – which involves eating high-fat, adequate-protein, and low-carbohydrate meals – or cannabidiol to reduce seizures.

Doctors carried out a CT scan before transferring Reggie to Addenbrooke’s Hospital in Cambridge for an MRI scan. But they still couldn’t work out what was wrong, Mr Johnson said.

He added: ‘They did the scan and said it clear. ‘We were like “what the hell is going on here?”‘

Reggie spent the next eight weeks in hospital, including three weeks in intensive care, where he suffered from constant fits.

The three-year-old went into an epileptic state and would shake ‘uncontrollably’ in his bed for up to three days, his father said.

Mr Johnson added: ‘It was so bizarre. The doctors didn’t know what was going on with him.’

Two months later, medics diagnosed him with FIRES, which can cause children to have recurring seizures that last for more than 24 hours.

Reggie was discharged from hospital in August.

He lives in a hospital bed in his living room at the family three-bed home, where his parents look after him.

He cannot communicate, he takes 12 different drugs in 20 different doses a day to keep his excruciating spasms at bay. And Reggie has been readmitted to hospital twice due to the severity of his seizures.

His father said he was an ‘absolutely normal’ three-year-old before he came down with the debilitating condition.

Mr Johnson said Reggie was advanced for his age – walking and running at 10 months and moved up a year in nursery – but is now a ‘totally different child’.

He said: ‘If I stand and say his name he won’t even acknowledge me. He’s in his own world.

‘Our life has completely changed and it all started from tonsillitis – from a cold that any child can get. In the long term, there’s no answer – this is his life.’

Mr Johnson added: ‘It’s so awful for Reggie. We can’t take him anywhere now. We even have to medicate him to go to sleep.

‘Me and Natalie take turns sleeping on the sofa with him – we just can’t leave him at all.

‘We’ve found something to give us strength – that he’s alive and he’s breathing.’