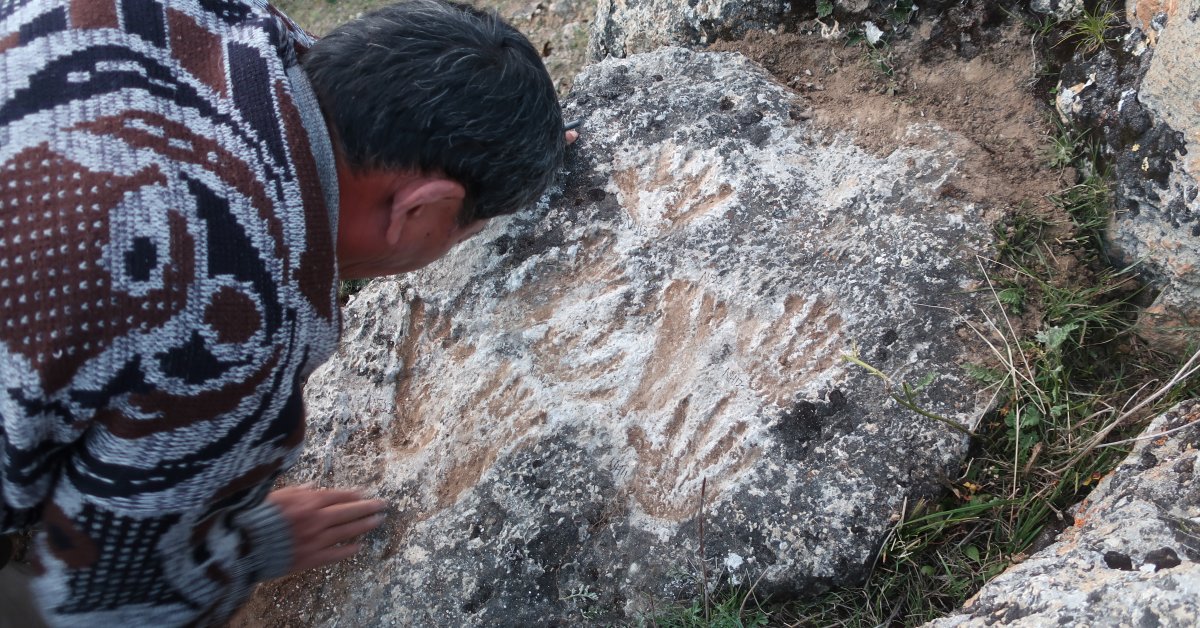 A scientist from Guangdong, China plans to appeal to the Tibetan government to conserve recently discovered fossils of handprints and footprints on a rock on the world’s highest plateau—because they may be the oldest prehistoric art ever recorded and the earliest evidence of human life in the region.

Dr. David Zhang, who found the impressions with his research team in Quesang on the Tibetan Plateau, said nearby villagers have already warded off strangers from visiting their research site.

Zhang, the lead researcher from Guangzhou University, discovered the impressions on a type of limestone called travertine in October 2018. The five footprints and handprints were located near a hot spring in Quesang some 80 km away from Lhasa but did not resemble tracks left by travelers; they were grouped together like a mosaic.
[time-brightcove not-tgx=”true”]

Read More: Much of What We Thought About Neanderthals Was Wrong

Using uranium series dating, Zhang’s team found that the tracks are between 169,000 and 226,000 years old, which dates back to the middle of the Pleistocene era, or around the Earth’s last ice age. They also extrapolated, based on the size of the modern human hands and feet, that the impressions could have been made by two children aged 7 and 12.

Their team published their findings in the Science Bulletin last month. Zhang claims the discovery raises many scientific questions about prehistoric human activity in the region. “You’re simultaneously dealing with a harsh environment, less oxygen, and at the same time, creating this,” he tells TIME.

The Tibetan Plateau—known as “The Roof of the World”—is located 4,500 m above sea level. Researchers have long studied how the human body adapts to such high-altitude environments, even down to the molecular level.

An August study claimed the earliest known occupation of human-like species in the Tibetan Plateau took place some 90 to 120 thousand years ago. Zhang’s findings date much older and could provide more insight into human evolution.

But it is still up for debate whether the impressions qualify as the world’s oldest parietal art, to use the archaeological term for prehistoric rock art. Presently, the oldest known examples are some 40,000 years in age, consisting of paintings and hand stencils on Sulawesi island in Indonesia and in the El Castillo cave in Spain.

Zhang says that the hand prints he found are ordered and tessellated in a manner that can be construed as “deliberate.”

Other experts are skeptical. Prof. Paul Taçon, a Professor of anthropology and archaeology at Griffith University in Queensland, Australia who specializes in rock art research, said it might be “a stretch” to refer to the impressions as art.

Read More: Fresco of Narcissus Found Among the Ruins of Pompeii

“The ‘impressions’ reported from Tibet could have resulted from a range of activity and we simply cannot state emphatically that they were made as a purposeful artistic creation,” Taçon tells TIME via email.

University of Oxford Professor Nick Barton, who teaches paleolithic archaeology, tells TIME that classical examples of parietal art are found on walls of caves and not on the ground. “I agree from their patterning that the footprints don’t look like straight-forward tracks but could they be the kinds of traces left behind by kids at play?” Barton says.

But Zhang says whether or not the tracks are art all boils down to context, adding that the critics have too modern a conception of art.

“When you use stone tools to dig something in the present day, we cannot say that that is technology. But if ancient people use that, that’s technology,” Zhang says.