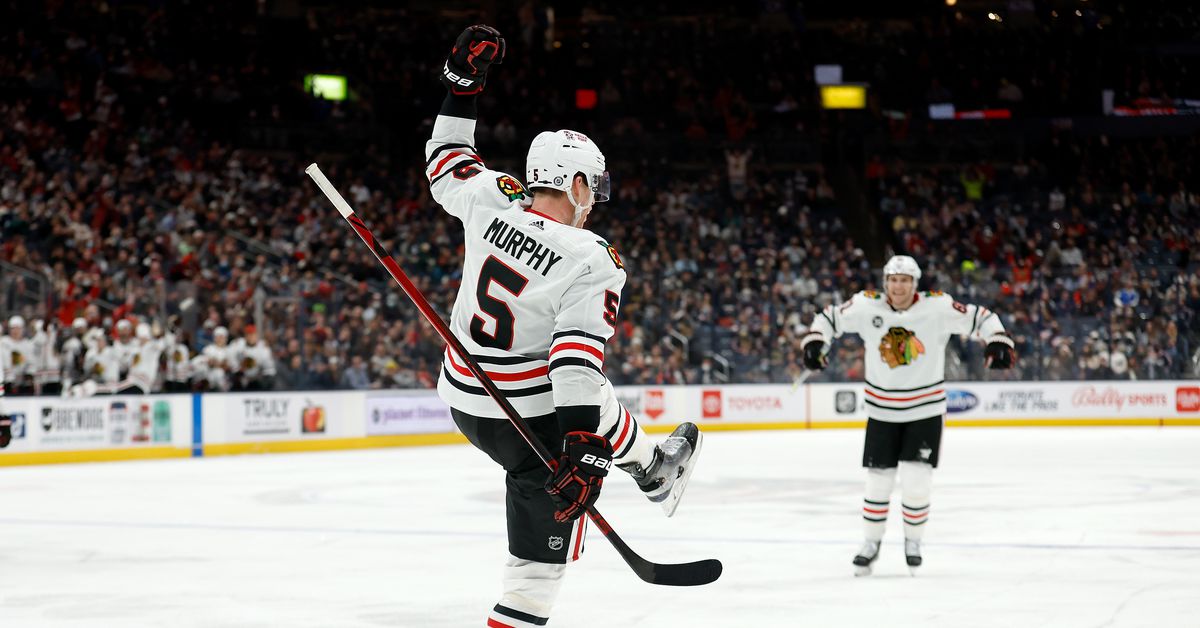 Connor Murphy’s season has been grueling.

Off the ice, the Blackhawks’ longest-tenured defenseman has needed to help guide the team through endless tumult over the last six months. On the ice, he has faced tougher assignments than ever and, at times, struggled to handle them.

“[I’ve had] ups and downs, kind of with the team,” he said this week. “The first part of the season was a tough stretch. It’s hard to keep or build confidence when you’re losing so many games, so I felt that a little bit. As we’ve gone on, I had a good stretch. And then not too long ago, I felt like I dropped off for a few games.

“As our team game has been building, that’s where my game has been able to come along. I’m able to make strides and get more consistent.”

Murphy, 28, remains one of the Hawks’ most important players. He’s averaging more than 22 minutes per game for the second consecutive season, second-most behind Seth Jones. And he’s typically tasked with the hardest defensive matchups. For example, 36.7% of his shifts this season have begun in the defensive zone, the highest rate on the team and in his career.

Those factors make it inherently difficult for Murphy to stay afloat in commonly cited analytics because he’s disadvantaged automatically.

“There’s always similar things [I’m working on] with puck play, and being more consistent with moving my feet when I get the puck and making clean passes,” he said. “But the staple of my game is more defending, and there have been a couple games where I’ve gotten away from being a hard defender. When I’m playing well, usually I’m doing that, and then the other stuff takes care of itself. I have to make sure that’s the backbone of my game.”

That puck-moving aspect historically has been Murphy’s weaker side. His sturdy frame, strength, instincts and positioning make him as reliable as they come defensively, but he readily admits — such as while praising Jakub Galvas’ stellar NHL debut — he still has a “hard time” being “poised with the puck.”

He did get to enjoy one rewarding offensive moment this week, scoring his third goal of the season Tuesday in his hometown of Columbus with his family in attendance.

Where Murphy makes his biggest impact, however, is in terms of leadership. He’s not only officially a first-time alternate captain this season but has also become, with Duncan Keith gone, the prevailing voice of the defense.

He has talked to the media during every low point this season, be it after ugly losses (Oct. 16 against the Penguins, Nov. 5 against the Jets or Jan. 6 against the Coyotes), after Jeremy Colliton’s firing or after the sexual assault investigation findings were released. He has helped captain Jonathan Toews preserve team unity and morale inside the locker room during those crises, too.

Outwardly, he has navigated it all with admirable amounts of honesty, accountability and assertiveness. But internally, it has been challenging.

“With some of the losing streaks we’ve had, it really does test your will and your confidence to stick with what you’re doing and recognize things with the team,” he said. “It brings out everyone’s true character. And that has been fun to see with our team, that everyone is not giving up in any of those moments.”

The Hawks are understandably hoping for a smoother ride the rest of the season. So is Murphy, whose four-year contract extension with a $4.4 million cap hit kicks in next summer.

But his stability, maturity and selflessness in all aspects through the Hawks’ overwhelming turbulence hasn’t gone unnoticed.

“He’s a guy that does everything right,” Patrick Kane said. “He works hard off the ice, works hard in the gym. He plays a hard game: physical, blocking shots, playing against top lines a lot of time. That’s not an easy game to play, night in and night out. He’s able to do that, contribute and be pretty successful.”

“He’s a pro,” interim coach Derek King added. “He does everything the right way, on and off the ice. It’s huge to have guys like that.”