Average coronavirus cases and deaths are continuing to increase across the U.S, reaching levels not seen in several months.

On Thursday, America recorded 92,714 new cases of the virus, which – although lower than the totals reported the previous two days – is among the highest numbers in six months.

The seven-day rolling average of 93,996 is the highest figure seen since mid-February and an increase of 277 percent from the 24,886 average reported three weeks ago.

Deaths are also continuing to rise with 490 COVID-19 fatalities reported on Thursday and a seven-day rolling average of 411.

It marks a 55 increase from the average of 265 deaths seen just 21 days prior and the first time that the average has surpassed 400 since June 9.

Experts say the surge is due to the highly transmissible Indian ‘Delta’ variant spreading, primarily in areas with low vaccination rates.

At a press conference on Thursday, Jeff Zients, the White House COVID-19 Response Coordinator, said that just seven states – Alabama, Arkansas, Florida, Louisiana, Missouri, Mississippi and Texas – account for half of new cases and hospitalizations despite making up a quarter of the population.

One doctor is now warning unvaccinated Americans to not assume that if they haven’t been infected with COVID-19 so far that they are safe.

‘This virus is highly infectious. If you decide to try to run the game clock out, don’t try to do it. This virus will find you, it will infect you eventually,’ Dr Michael Osterholm, director for the Center for Infectious Disease Research and Policy at the University of Minnesota, told CNN on Wednesday.

However, experts say that the U.S. is likely following the trajectory of the UK and should see decreases over the next two to three weeks. 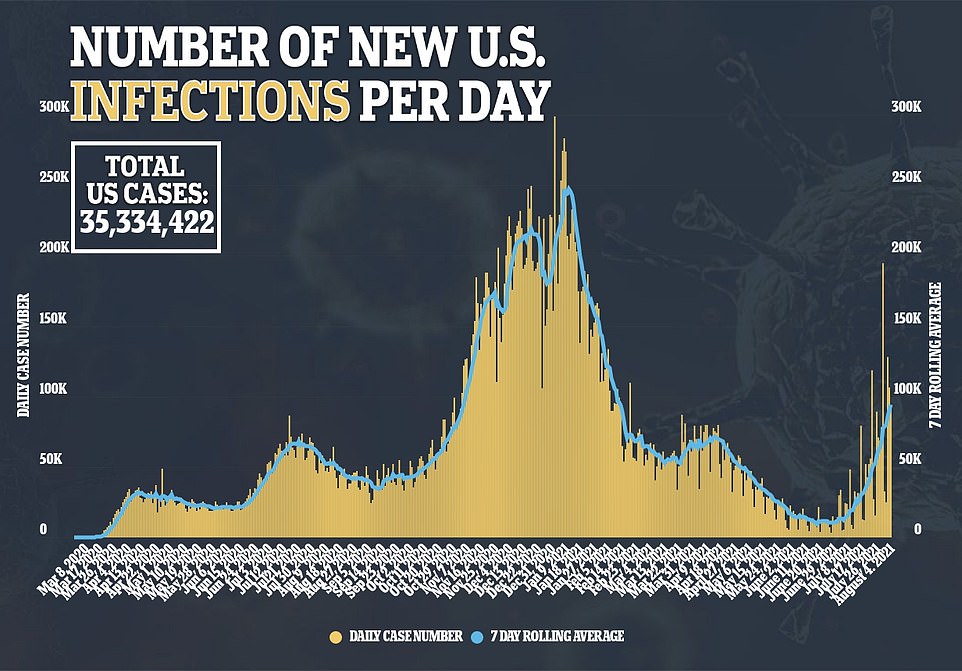 On Thursday, the U.S. recorded 92,714 new cases, a 277% increase from the 24,886 average reported three weeks ago and the highest number since mid-February 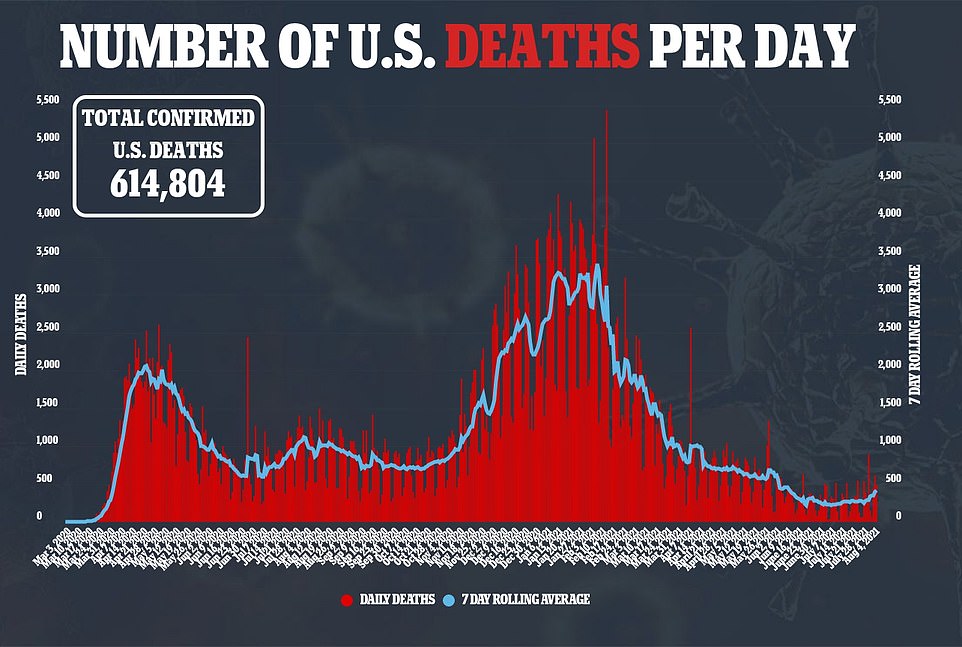 Additionally, 490 COVID-19 deaths were reported with a seven-day rolling average of 411, the first time the average has surpassed 400 since June 9 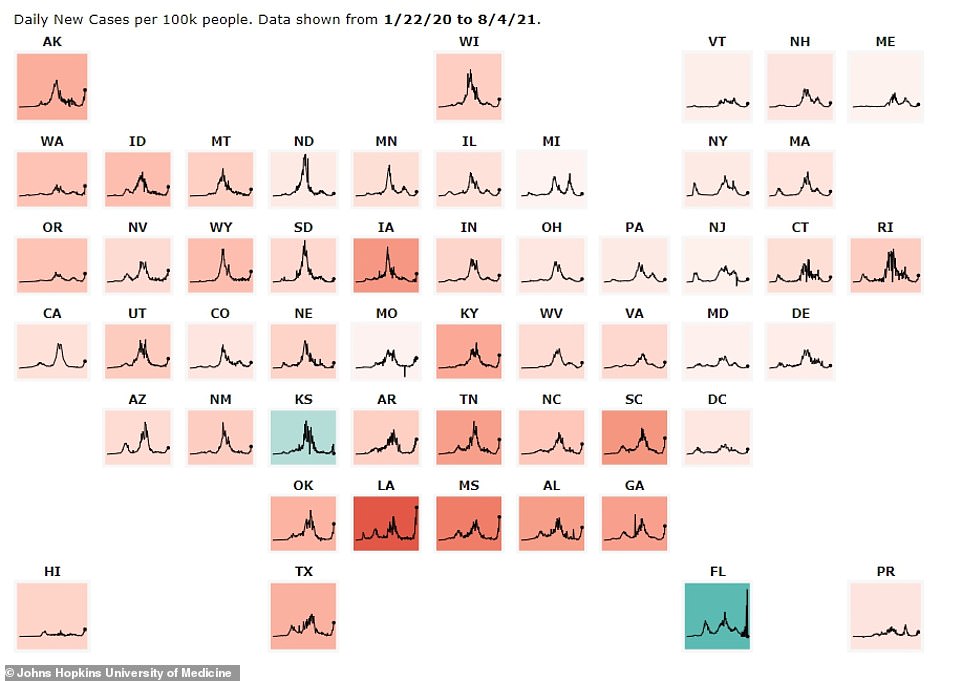 The White House says seven states – Alabama, Arkansas, Florida, Louisiana, Missouri, Mississippi and Texas – account for half of new cases and hospitalizations despite making up a quarter of the population

Florida is currently recording the highest number of average infections per day in the nation with 18,454 reported on Wednesday.

This means the Sunshine State has seen cases rise by 76 percent in two weeks from an average of 10,452 cases per day, a DailyMail.com analysis of data from Johns Hopkins University shows.

Additionally, the Florida Hospital Association (FHA) says hospitalizations are up 13 percent from the peak of 10,170 seen on July 23, 2020.

Currently, 84 percent of all inpatient beds and 86.5 percent of ICU beds are occupied.

The FHA also said that it expects up to 60 percent of hospitals in Florida to face a ‘critical staffing shortage’ within the next week.

Additionally, the state 255 pediatric patients hospitalized with confirmed and suspected COVID-19,  behind only Texas and California, federal data from the Department of Health and Human Services (HHS) show.

‘In our previous iteration of the pandemic, it was more they’re positive but they’re not sick or minimally sick,’ Dr Ronald Ford, chief medical officer for Memorial Healthcare System’s Joe DiMaggio Children’s Hospital in Hollywood told the Miami Herald.

‘This is different…There’s a much higher percentage of pediatric patients becoming infected and symptomatic.’ 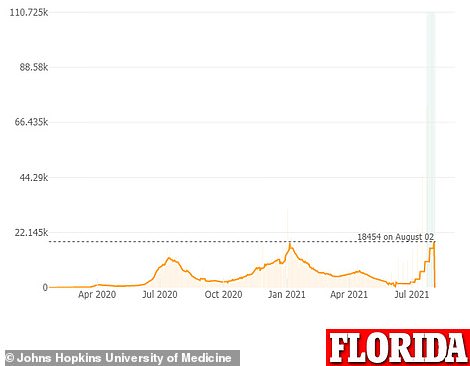 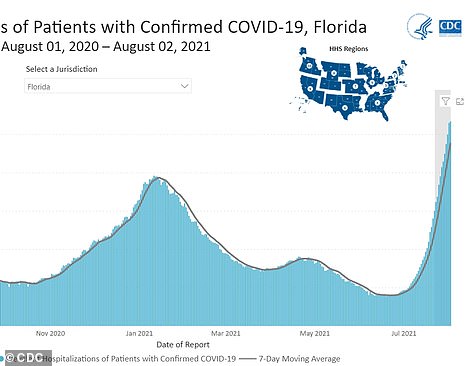 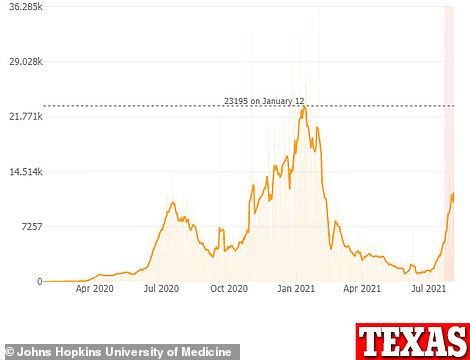 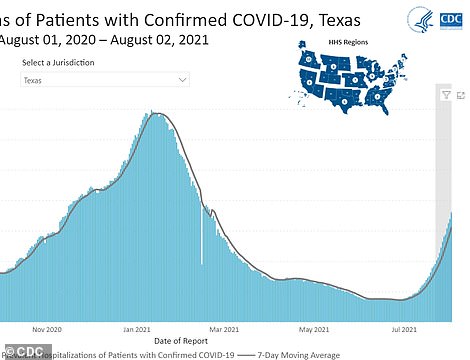 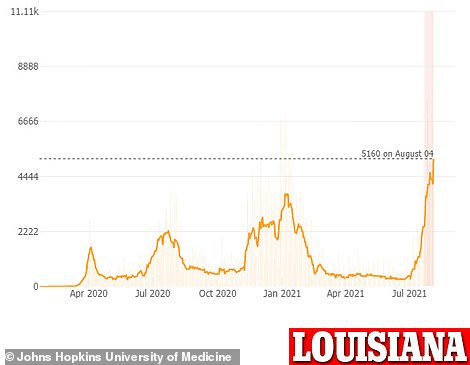 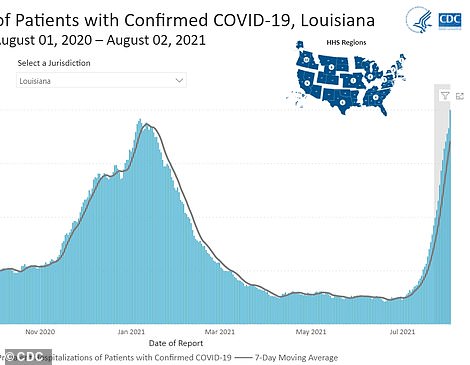 In Louisiana, cases are rising rapidly, up 64% from an average of 2,414 per day to 3,965 per day (left). There are currently 2,247 Covid patients hospitalized, which is a record-high number (right)

Meanwhile, in Texas , cases are also rising rapidly from an average of 5,207 per day to 11,775 per day, up 126 percent over the last two weeks, the DailyMail.com analysis found.

In a video conference on Wednesday, state officials said the seven-day rolling average of new COVID-19 cases, are showing rising faster than at any other point during the pandemic.

According to the state’s Department of Health, 7,600 patients are currently hospitalized with the virus, a number not seen since mid February.

Texas also has the highest number of children patients hospitalized with the virus at 530, according to federal data.

‘Texas is experiencing a sharp rise in cases and hospitalizations, and this has been driven by the Delta variant,’ Dr Jennifer Shuford, the state’s chief epidemiologist, said in the video conference.

‘We’re seeing increased hospitalizations in every age group, including our pediatric age group.’

The state’s vaccination rate is behind the national average with 43 percent of residents having received at least one dose and only 37.1 percent fully vaccinated, CDC data show. 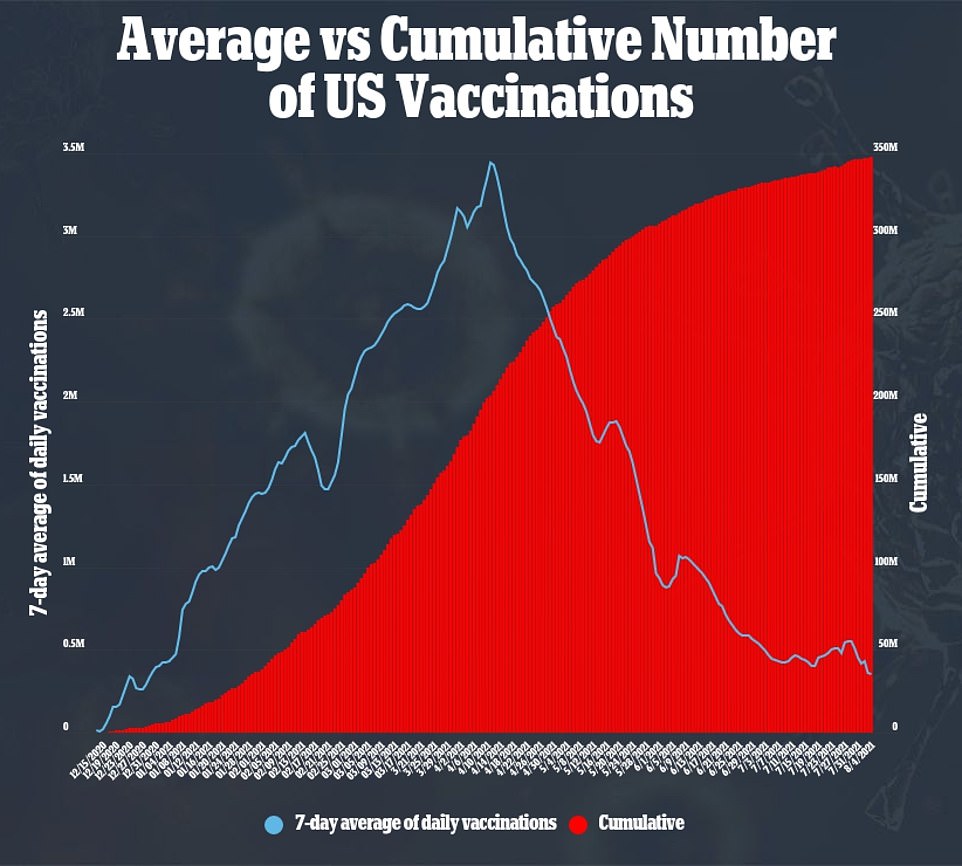 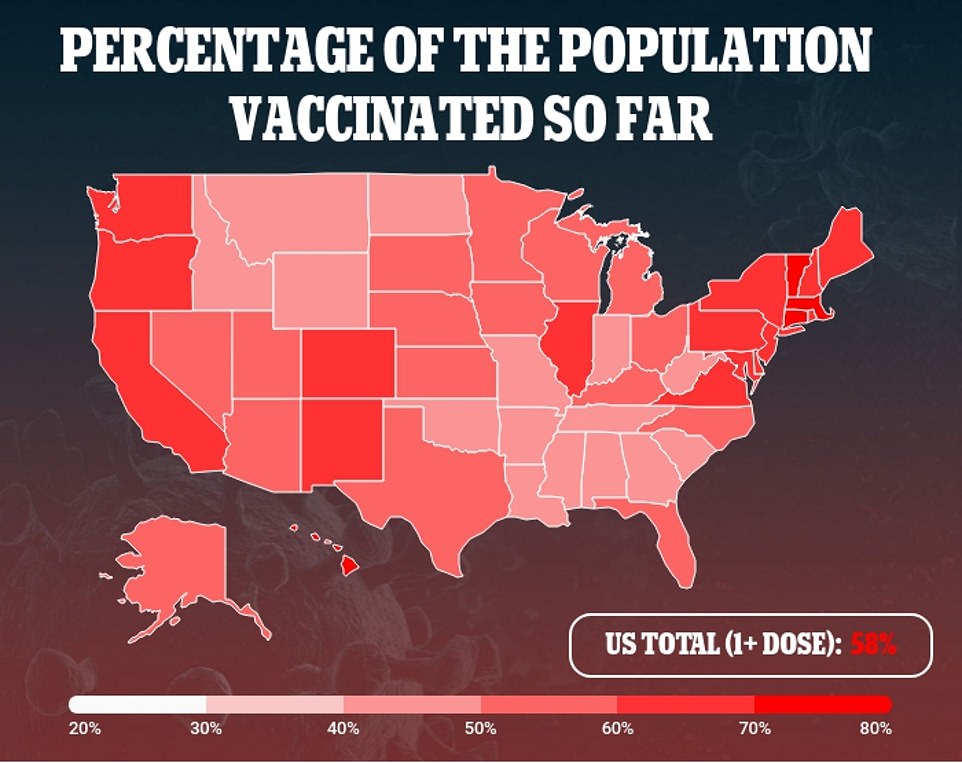 In Louisiana, a mix of the Delta variant and low vaccination rates are creating the most severe wave the state has ever seen.

Over the last two weeks, average COVID-19 cases have increased by 64 percent from 2,414 per day to 3,965 per day, a DailyMail.com analysis found.

According to the Louisiana Department of Health, there are currently 2,247 Covid patients hospitalized, which is a record-high number, 89 percent of whom are not vaccinated.

State data shows that 18 to 29-year-olds are the fastest-growing group contracting the virus and being hospitalized.

The Bayou State has currently one of the worse vaccination rates in the county.

According to data from the CDC, just 43 percent of residents have received at least one dose and 37.1 percent are fully vaccinated.

‘None of us imagined it could get this bad,’ Ecoee Rooney, president of the Louisiana State Nurses Association, told Reuters.

Rooney said that nurses are facing exhaustion as beds fill up, but many Louisianans continue to deny the existence of the virus.

‘We have COVID patients who don’t believe they even have COVID, because they refuse to believe it exists,’ she told Reuters.

‘We’re feeling the brunt of the frustration and the anxiety about what our future looks like if people don’t get vaccinated and wear masks.’ 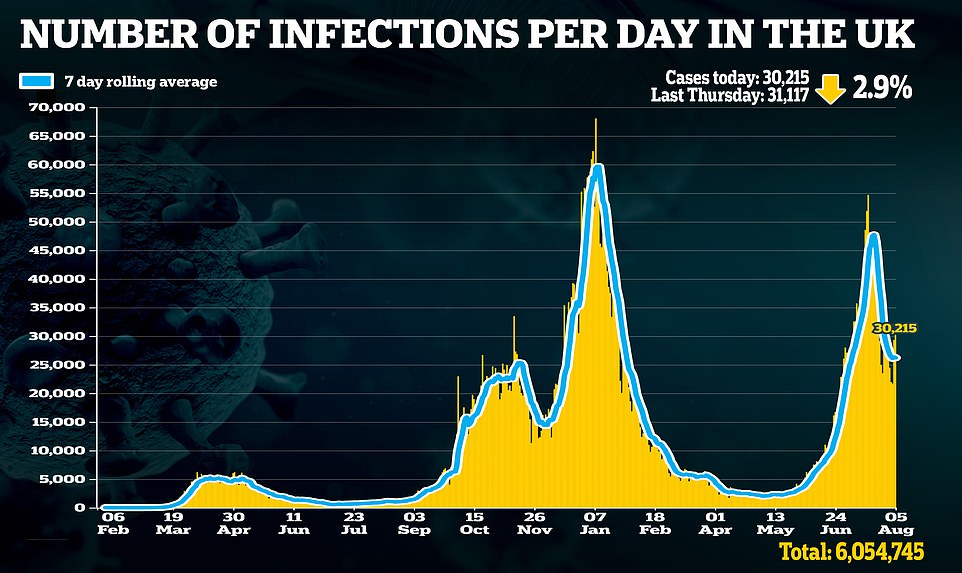 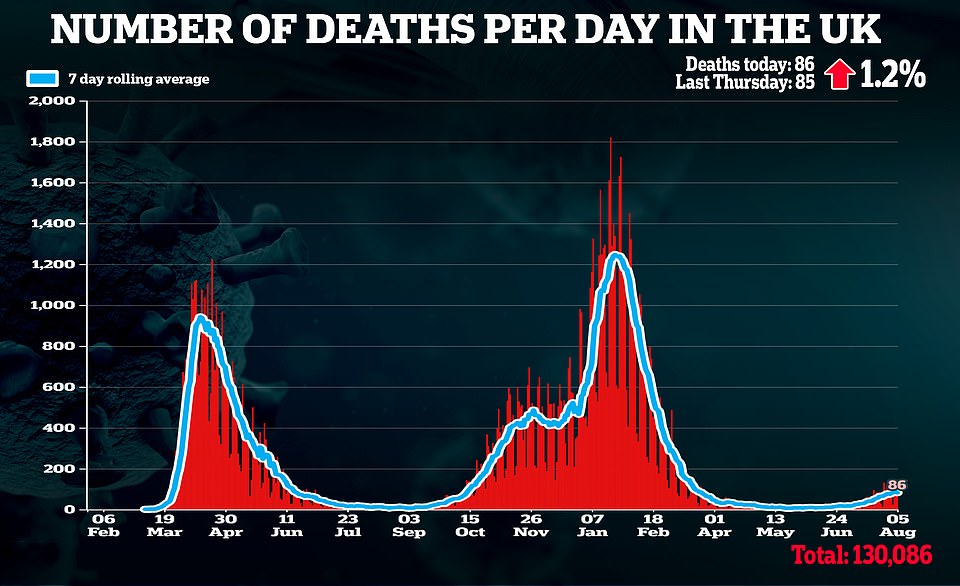 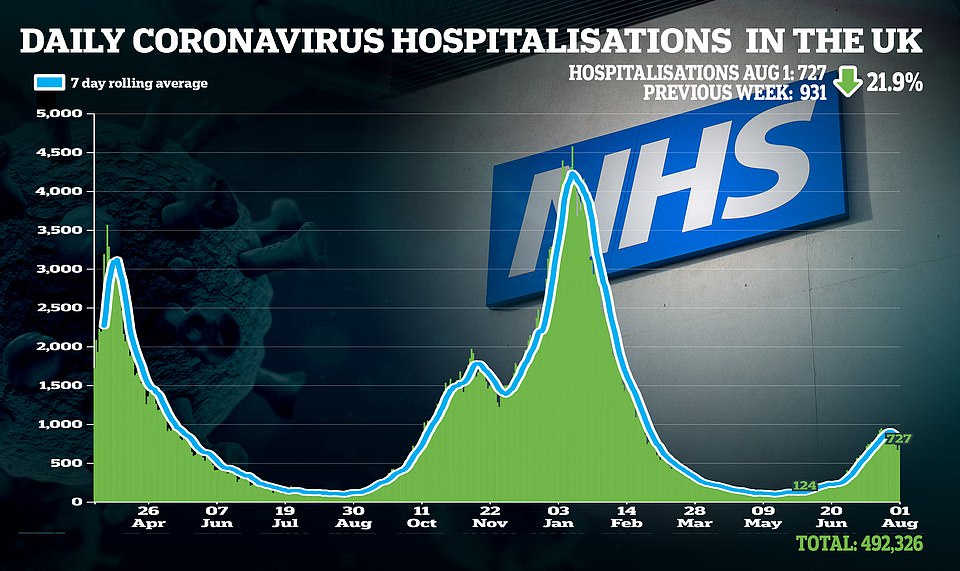 Meanwhile, the UK’s daily COVID-19 cases continue to remain far below the mid-July peak, although declines are starting to plateau.

Figures from the Department of Health releases on Thursday show 30,215 new cases, which is up three percent from the 31,117 reported last Thursday.

What’s mire, the the seven-day rolling average for infections – which paints a clearer picture of the actual trend – has sat for the fourth day at 26,000, after straight declines for nearly two weeks.

A MailOnline analysis has suggested the trend may linked to rising cases among 15-to-24-year-olds, which scientists claimed was likely sparked by ‘Freedom Day,’ on which the UK lifted most pandemic restrictions.

But experts did not rule out lower vaccination rates in the age groups and colder weather towards the end of the month also being behind the increase.

Daily COVID-19 hospitalizations continued to fall after dropping by a fifth in a week, down 20 percent, to 727 admissions at the start of August, the latest date available.

Another 86 deaths were also recorded, similar to the 85 announced at the same time last week. 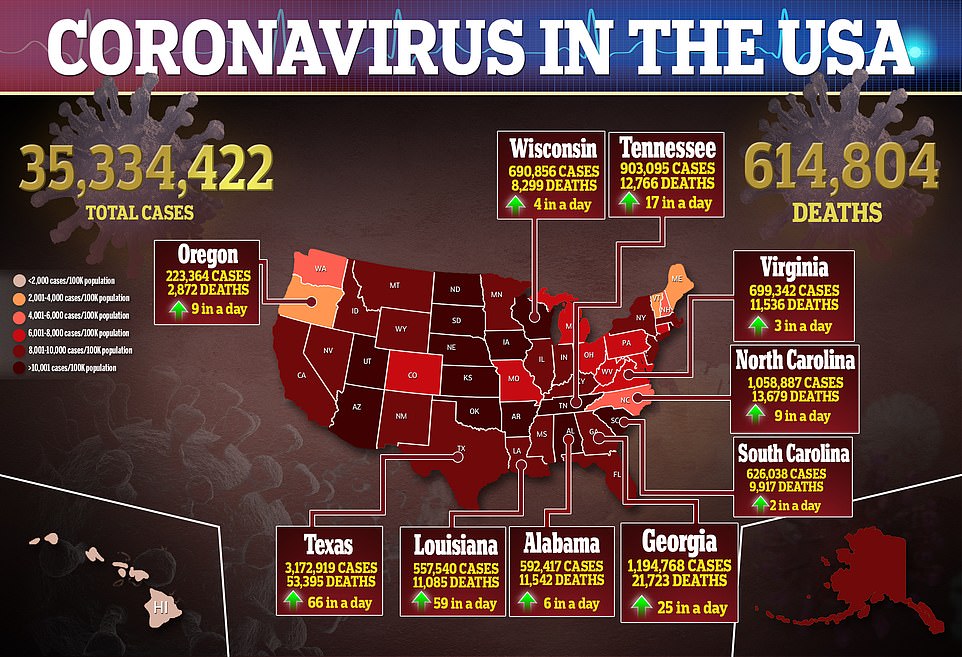