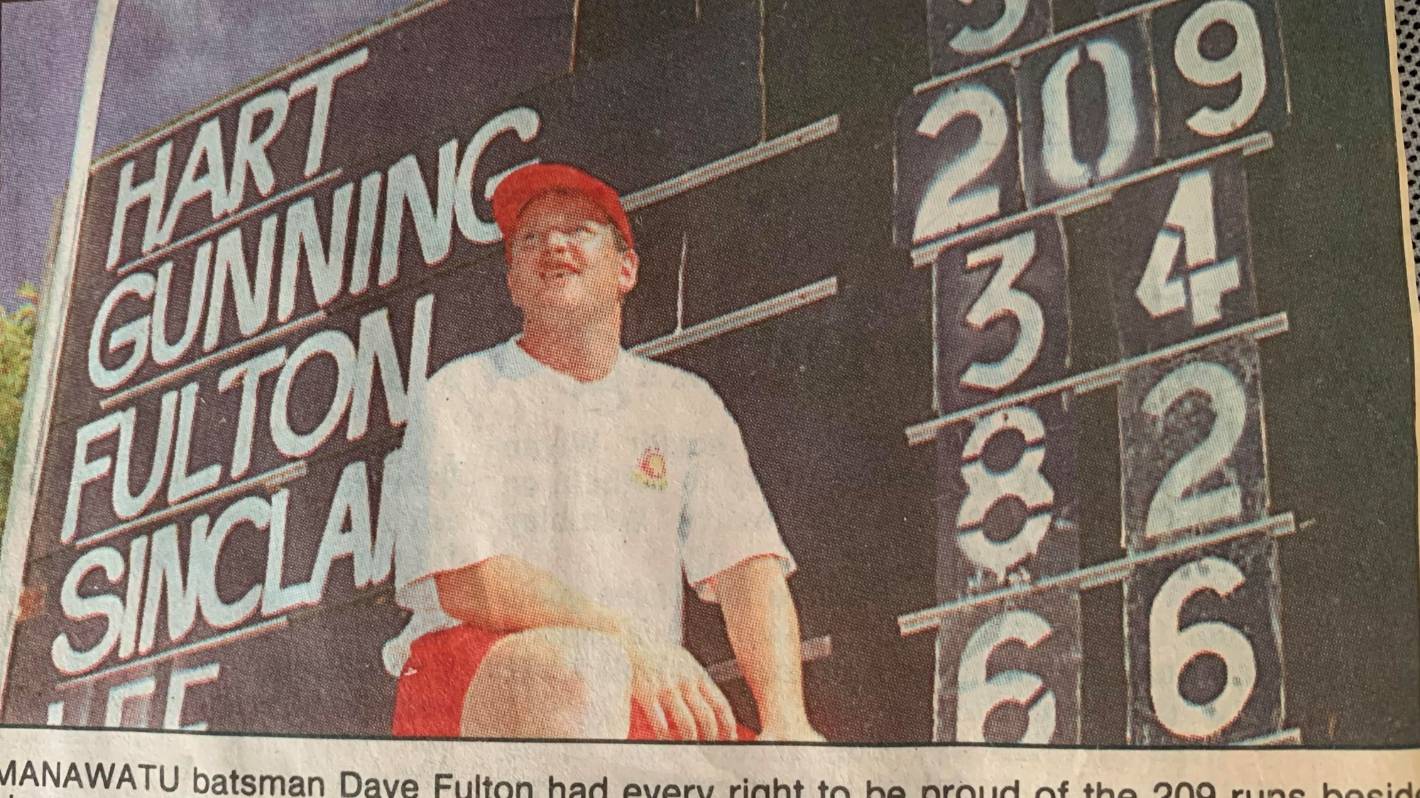 OPINION: Dave Fulton would like his double century back.

On February 13, 1994, we organised a photo to be taken of the long-serving Manawatū cricketer with the now deceased Fitzherbert Park scoreboard as a backdrop.

The reason; it was displaying the mammoth 209 he had scored in a Hawke Cup match against South Canterbury.

However, to this day in NZ Cricket’s online archive, his 209 sits beside the name of New Zealand batsman Mathew Sinclair while Fulton is given Sinclair’s 34.

It’s not as if Sinclair needs another ton. He helped himself to 214 against the West Indies, 204 against Pakistan and 268 for New Zealand A in Potchefstroom.

Fulton has contacted NZ Cricket about the misplacement and even sent them a copy of the scorebook of his innings, to no avail. He’s not the sort to make a song and dance about it so maybe this account will help rectify it.

He got his double ton on such a flat deck that, as we said at the time, a herd of elephants wouldn’t have made a dent in it, and Manawatū amassed 650 for nine declared.

Fulton deployed powerful forearms and an economy of backlift and footwork.

It had cost South Canterbury $15,000 to make the trip and one of their pacemen got only three balls to seam all innings which lasted 240.1 overs. Every Manawatū batsman reached double figures.

Fulton didn’t bother wearing a thigh pad or a helmet in that game. He always had a good eye. My match report recorded that he got only a couple of boundaries from cut shots and hit only one ball in the air all innings, which was chanceless.

He still pleads guilty to ”losing concentration” when after almost nine hours (532 minutes), he was bowled. While he hit 32 fours, he didn’t get one six; he didn’t need to.

Fulton came into cricket through back doors, namely indoor cricket where he represented New Zealand before he had played outdoor cricket. In civvy street, he went on to be the Fitzherbert Park groundsman and is now the Massey University grounds supervisor.

He was never one of those prodigies who emerge from Palmerston North Boys’ High School and who get picked up early for Central Districts age-group teams and camps.

Fulton graced the eighth XI which played in the morning Boys’ High league, in his terms ”basically a bunch of misfits” and non-cricketers.

After lunch he would be playing tennis for Takaro Park on grass courts where he could serve and volley. So why did he leave tennis? ”The wind”. The ball had to be airborne in that sport, and it didn’t suit him when the grass was replaced by artificial courts.

In his last year at school in 1983 he was in the Boys’ High soccer 1st XI which was the first team outside Auckland to win the national secondary schools’ title.

In sport he was a natural. Everything he did he learnt himself.

He began playing social cricket for a police twilight team named Blue and White Taxis and one day Freyberg’s Paul Wischnowsky was injured and looking for a wicketkeeper. Fulton had never kept with pads on and he ended up playing in division 6 for Old Boys Ratbags with nothing to prove.

From there he filled in for Freyberg in senior cricket as a tail-ender who couldn’t bat and was nicknamed ”three balls” by Palmerston because that’s all he ever survived. He even had a golden pair against Marist.

A season later he went well enough, playing cut shots to everything as they do in the indoor game, into the corners.

By his third season he was in the Manawatū team.

Fulton even then could never have envisaged he would score 11 centuries for Manawatū and a record 5230 runs over 17 seasons until 2006, 1266 more than the next best, David Meiring. Fulton has also had 15 club tons to his name and 11,432 runs for Freyberg. Oh, chuck in another 1000 runs or so in premier two. Beat that.

He turned down an offer and ”reasonable coin” from a Wellington club, and was tempted because Wellington picked on form from club cricket. Not CD so much although the selectors did have eight districts to survey.

While he captained CD B for a season, Fulton only got to play three one-dayers for the Stags, in 1993-93.

About that time the CD middle order had players such as Roger Twose, Tony Blain, Andrew Jones, Mark Greatbatch…

Once Fulton scored 140 for CD B at Carisbrook and when he returned home the selectors weren’t aware of it.

On another occasion when he was called in for CD B to play a strong Canterbury B in two games at Dannevirke, he top-scored while the batsmen above him ”got nothing”.

Fulton was sent on his way because the selectors said he had only been a fill-in.