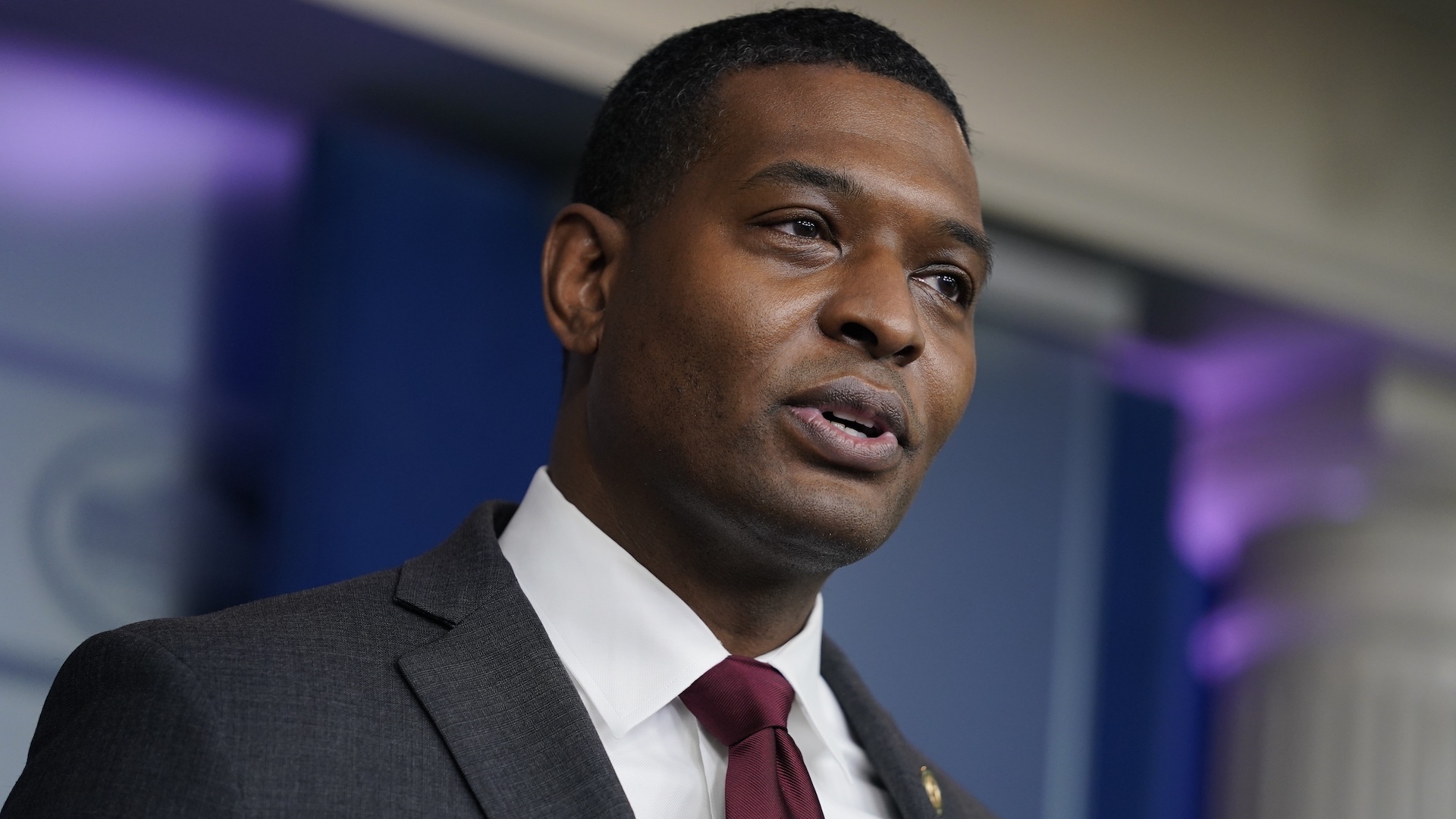 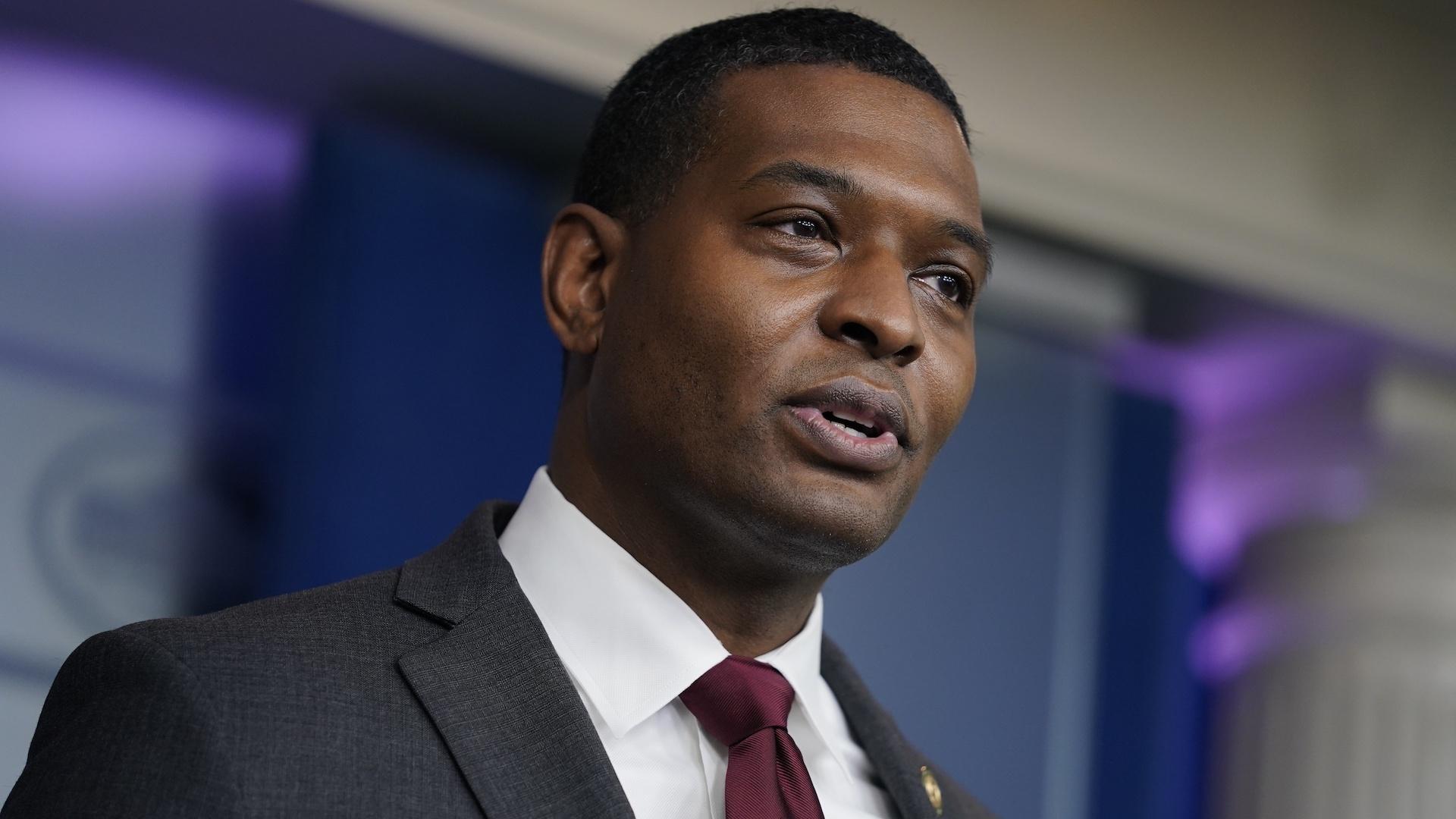 In this May 12, 2021, file photo, Environmental Protection Agency administrator Michael Regan speaks during a press briefing at the White House in Washington. (AP Photo/Evan Vucci, File)


WASHINGTON (AP) — The Biden administration said Monday it is launching a broad strategy to regulate toxic industrial compounds associated with serious health conditions that are used in products ranging from cookware to carpets and firefighting foams.

Michael Regan, the head of the Environmental Protection Agency, said his agency is taking a series of actions to limit pollution from a cluster of long-lasting chemicals known as PFAS that are increasingly turning up in public drinking water systems, private wells and even food.

The Defense Department said it is moving to assess and clean up PFAS-contaminated sites throughout the country, while the Food and Drug Administration will expand testing of the food supply to estimate Americans’ exposure to PFAS from food. And the Agriculture Department will boost efforts to prevent and address PFAS contamination in food.

The plan is intended to restrict PFAS from being released into the environment, accelerate cleanup of PFAS-contaminated sites such as military bases and increase investments in research to learn more about where PFAS are found and how their spread can be prevented.

“This is a bold strategy that starts with immediate action” and includes additional steps “that will carry through this first term” of President Joe Biden, Regan said in an interview with The Associated Press. “We’re going to use every tool in our toolbox to restrict human exposure to these toxic chemicals.”

PFAS, called “forever chemicals” because they last so long in the environment, have been associated with serious health conditions, including cancer and reduced birth weight.

PFAS is short for per- and polyfluoroalkyl substances that are used in nonstick frying pans, water-repellent sports gear, stain-resistant rugs and countless other consumer products. The chemical bonds are so strong that they don’t degrade or do so only slowly in the environment and remain in a person’s bloodstream indefinitely.

Under the strategy announced Monday, the EPA will move to set aggressive drinking water limits for PFAS under the Safe Drinking Water Act and will require PFAS manufacturers to report on how toxic their products are. The agency also will designate PFAS as hazardous substances under the so-called Superfund law that allows the EPA to force companies responsible for the contamination to pay for the cleanup work or do it themselves.

The actions will make it easier for the EPA to ensure that cleanups are conducted safely and that “the polluter pays for that,” Regan said.

Environmental and public health groups welcomed the announcement. Advocates have long urged action on PFAS by the EPA, FDA, Pentagon and other agencies.

Thousands of communities have detected PFAS chemicals in their water, and PFAS have been confirmed at nearly 400 military installations, according to the Environmental Working Group, a research and advocacy organization.

“No one should have to worry about toxic forever chemicals in their tap water,” said Scott Faber, the group’s senior vice president. The group is grateful that the Biden administration will fulfill the president’s pledge to address PFAS and “begin to turn off the tap of industrial PFAS pollution,” Faber said.

The American Chemistry Council, which represents major chemical companies, said it supports “strong, science-based regulation of chemicals, including PFAS substances.” But the group added: “All PFAS are not the same, and they should not all be regulated the same way. EPA’s Roadmap reinforces the differences between these chemistries and that they should not all be grouped together. We hope and expect any federal actions will be consistent with sound science.”

The regulatory strategy comes as Congress considers wide-ranging legislation to set a national drinking water standard for certain PFAS chemicals and clean up contaminated sites across the country, including military bases where high rates of PFAS have been discovered.

Legislation passed by the House would set a national drinking water standard for PFAS and direct the EPA to develop discharge limits for a range of industries suspected of releasing PFAS into the water. The bill has stalled in the Senate.

“We’ve known about PFAS and its dangerous effects for years, and today, the federal government made a commitment to the American people that these chemicals cannot be ignored any longer,” she said.

Even with EPA action, Congress still must approve legislation to regulate and clean up PFAS, Dingell said. “It’s time for the Senate to act,” she said.

Regan, a former North Carolina environmental regulator who took over as the EPA head in March, said he saw firsthand in his home state how dangerous PFAS can be.

As North Carolina’s top environmental official, Regan led negotiations that resulted in the cleanup of the Cape Fear River, which has been dangerously contaminated by PFAS industrial compounds that were released for decades from a manufacturing plant run by a spinoff of chemical giant DuPont.

“I spent time with families in their communities, talking to them about the fears and worries that they had,” said Regan, who announced the agency plan at a news conference in Raleigh. “I spent time talking to mothers who were concerned about potential long-term impacts to their children, caregivers who were wondering if terminal illnesses of their loved ones were connected” to the PFAS release from the Fayetteville Works plant.

“So there is a real sense of urgency,” he added.

The EPA under his leadership has “done more in eight months” on PFAS than the previous administration did in four years, he said.

Officials expect a proposed rule on PFAS in drinking water by 2023, Regan said. “We’re going to move as quickly as possible to set these safe drinking water limits,” he said.

Action on PFAS will not be done “on the backs of the American people,” Regan added. “We are holding the polluters accountable, and we’re using the full extent of our statutory authority to be sure that they pay for what they’ve done.”