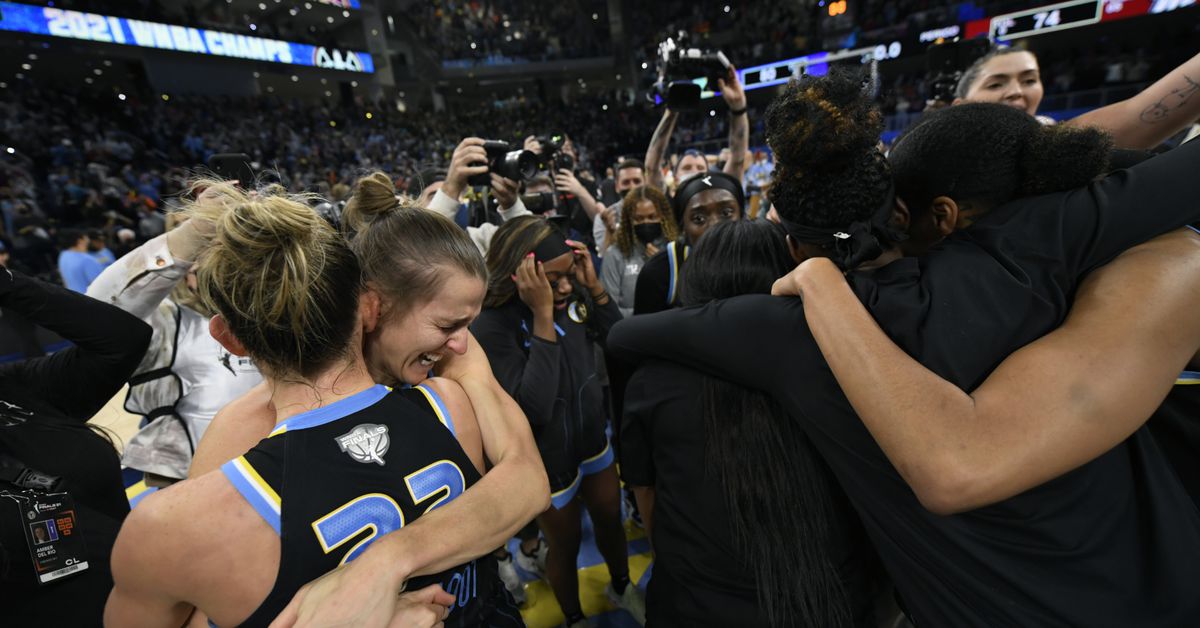 A month before the Sky won their first WNBA championship in the franchise’s 16th season, Courtney Vandersloot reflected on her time with the organization.

Drafted by the Sky in 2011, Vandersloot thought about how special it would be to win a title. She wouldn’t let herself get caught up in it because at that point the Sky were hovering around .500 and hadn’t yet clinched a playoff berth.

Also, Vandersloot isn’t one to talk about things that haven’t happened yet. But she did divulge one thought.

“I’ve always been motivated to win a championship with the organization that drafted me,” Vandersloot said in September.

On Sunday, Vandersloot flitted around Wintrust Arena, walking over piles of blue and gold confetti, donning a hat that read “WNBA CHAMPIONS,” with eyes still puffy from the postgame tears.

Vandersloot and wife Allie Quigley shared most of the journey. Quigley signed with the Sky in 2013 after coach Pokey Chatman scouted her in Europe. Vandersloot is the longest-tenured Sky player, and Quigley is tied with Tamera Young for second.

Vandersloot and Quigley have been with the organization through the departures of Sylvia Fowles in 2015 and Elena Delle Donne in 2017. They played in front of measly crowds at a dark, deserted Allstate Arena and through coaching hires and fires.

The duo even made it close to the mountaintop in 2014, only to be dismissed by Diana Taurasi and the Phoenix Mercury in a crushing three-game Finals sweep.

Seven seasons later, they met again and returned the favor.

“We did it,” Quigley yelled in a sea of celebration, her wife standing nearby.

The pair go way back. Before they met in the 2014 finals, they were teammates in Phoenix in 2008 and 2009. The Mercury were one of the four teams Quigley played for before landing with the Sky.

Off the court, Taurasi acknowledged Quigley’s prowess. But on the court in the finals, she pushed, jabbed and even tripped her opponent at one point in the first half Sunday.

Quigley never lost her cool, and in the fourth quarter, she hit three three-pointers in a row, igniting a late run. Fittingly, Vandersloot had the final four points of the game. Candace Parker grabbed the last rebound.

Taurasi and her teammates declined to participate in media availability after the game. The Sky walked into the media room reeking of champagne, goggles pressed to their foreheads.

When coach/general manager James Wade took the job in 2019, he met with Vandersloot first. The only way he’d take the job, he said, was if he knew she and Quigley were going to stick around.

“When given the job, [Courtney and I] met in a cafe, and I said, ‘We’re going to get a championship,’ ” Wade said. “I didn’t know how we were going to do it. I was just trying to get her to believe.”

Wade made the entire organization and Chicago believe that the Sky could be champions. Now they are.