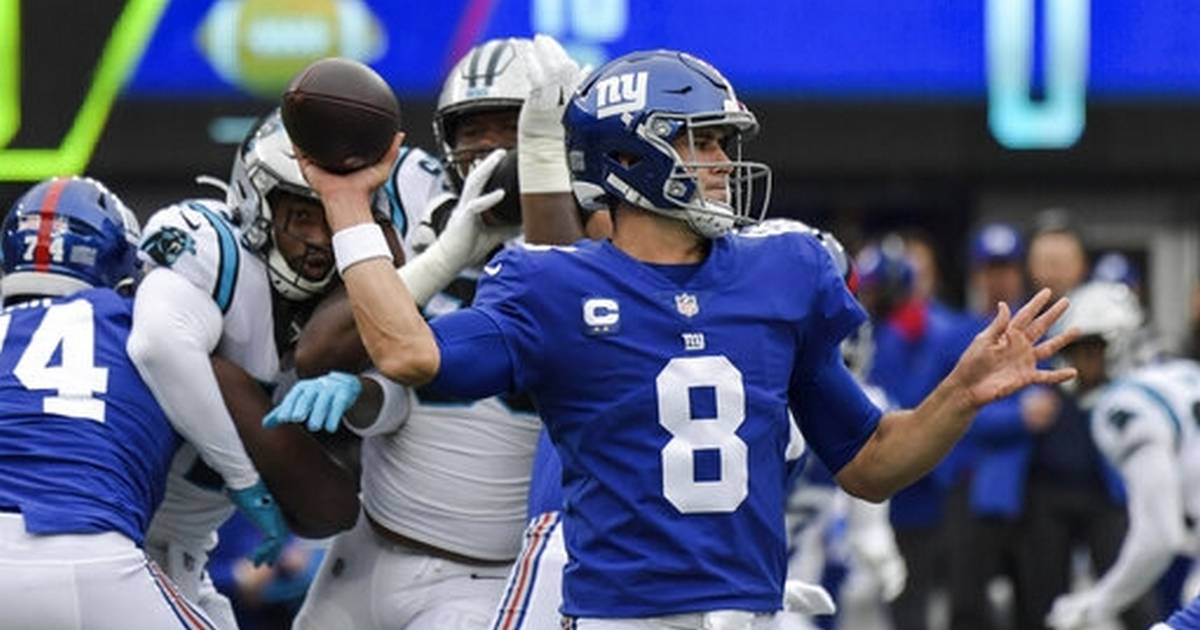 EAST RUTHERFORD, N.J. — It’s hard to predict where the New York Giants are headed after playing their best game of the season in beating the struggling Carolina Panthers 25-3.

The defense, which was supposed to be the heart of the team, finally had a good game in holding the Panthers without a touchdown and limiting them to 173 total yards.

The offense did just enough to get by with its three top wide receivers and star running back sidelined with injuries, and the line shuffling once again because of injuries.

Bottom line: coach Joe Judge and his Giants are 2-5. They are tied for second place with Philadelphia and Washington in the NFC East, 3 1/2 games behind Dallas (5-1). The Cowboys had the week off. With 10 games left in the regular season, the Giants need a big run to have a shot at making the postseason for the first time since 2016.

The one thing the Giants can bank on is quarterback Daniel Jones. Now in his third season, Jones is the face of the team.

With most of his skill players out Sunday, he did it all against the Panthers. He ran for 30 yards and he continues to lead the team in rushing with 229 yards and two TDs. He threw for 203 yards, a touchdown, and had no turnovers. Oh yeah, he also made a finger-tip, one-handed catch on a flea flicker to highlight the game’s one meaningful touchdown drive.

‘Daniel’s a competitor,’ safety Logan Ryan said after Sunday’s game. ‘I think he shows that he puts his body on the line to do whatever it takes running. I just heard QB1, RB1 and Wide Receiver 1 today. He put it on the line today and whatever it took to get those first downs, to grind it out.’

Jones is 153 of 241 for 1,727 yards, five touchdowns and four interceptions this season. He is hitting 63.5% of his passes and his running ability gives the offense an added dimension.

And if someone else throws the ball, well maybe Jones will be there to make a one-handed catch.

The defense for a change. New York held the Panthers to 173 yards, its top performance of the season. The previous low was 296 yards against Atlanta. The other five games were 420, 407, 405, 515 and 365. Pat Graham’s unit did not give up a touchdown after allowing 20 in the first six games. The front seven had six sacks, including 2 1/2 by rookie linebacker Azeez Ojulari and 1 1/2 from Leonard Williams. The Panthers’ longest play was 21 yards.

The offensive line. While injuries have had the line in flux, the group needs to perform better. Jones was sacked twice, hit five times and did a lot of running to stay healthy. The Panthers had nine tackles for losses, including one on a third try from within the 1-yard line in the second quarter. Teams have to be able to punch it in from that range on three attempts.

Dante Pettis was elevated off the practice squad on Oct. 17 for a game against the Rams. When Kadarius Toney was injured early, Pettis was targeted 11 times and had five catches for 48 yards. He caught all five of the passes thrown his way for 39 yards and a TD on Sunday. He also threw a 16-yard pass to Jones on a flea flicker. His good arm comes from his father, Gary, who spent 10 seasons in the major leagues and is now the third-base coach for the Astros. Houston will face Atlanta in the World Series.

The punt return team. Carolina punted seven times and the Giants were flagged three times on the returns. That’s 30 yards lost. Darney Holmes was flagged for an illegal block above the waist and holding, while Keion Crossen was called for holding.

Safety/punt returner Jabrill Peppers sustained ankle and knee injuries. Outside linebacker Lorenzo Carter sprained an ankle. They join a list that includes wide receivers Kenny Golladay (knee), Sterling Shepard (hamstring), Toney (ankle), running back Saquon Barkley (ankle) and defensive tackle Danny Shelton (pectoral), who were all inactive. Judge said all his injured are on different time tables. The extra day off might help some be ready for Monday night.

22 – margin of victory. It was the Giants’ largest since December 2018, when they beat Washington 40-16. It was the largest in Judge’s two seasons. His previous high was a 27-17 win over Philadelphia in mid-November.

The Giants have the under-performing Chiefs (3-4) at Kansas City on Monday night and then a home game with the Raiders (5-2) on Nov. 7 before a bye week. Las Vegas has next weekend off and will be fresh. Going into the break with a three-game winning streak would rekindle some hope for the Giants. But that’s probably wishful thinking.