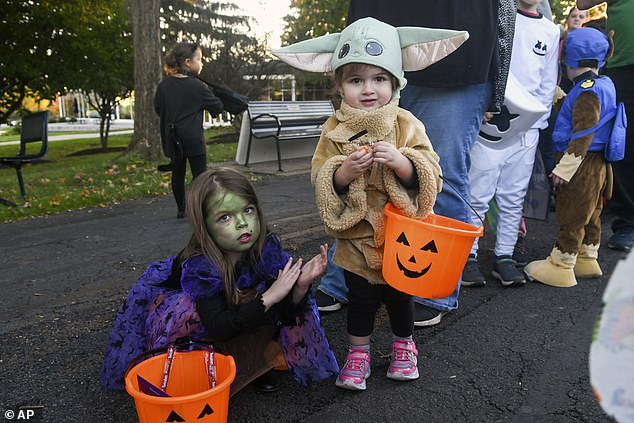 Give children STICKERS instead of sweets this Halloween to cut down on their sugar, health experts say

By Joe Davies For Mailonline

Trick-or-treating children should be given stickers not sweets this Halloween, health experts say.

Their recommendations include avoiding sticky sweets, limiting the amount of treats given out at the door and ensuring children brush their teeth with fluoride toothpaste.

Tooth decay is the most common cause of hospital admissions for children aged five to nine in England, with 25,000 admitted each year.

Decay is largely preventable and a massive burden on the NHS, costing the health service £54.6million for treating children alone in 2019.

Trick-or-treating children should be given stickers not sweets this Hallowe’en, according to health experts worried about sugar intake

What are the RCSE’s six recommendations for child tooth health this Halloween?

Matthew Garrett, dean of the Faculty of Dental Surgery (FDS) at RCSE, said: ‘There is a trick to ensuring healthier teeth for children, and that involves enjoying sugary treats, but in a way which reduces harm to teeth and gums.

‘Trick-or-treating is a night of great fun, but parents, grandparents and guardians must be alert to the importance of making sensible decisions about letting children eat sweets at Halloween and all year round.

‘Our message not just for Halloween but for all year round is that tooth decay is 90 per cent preventable through reducing sugar consumption, regular brushing, frequent exposure to fluoride and routine visits to the dentist.

‘Everyone under 18 is eligible for free NHS dental care yet recent statistics show over 67 per cent of children in England did not see an NHS dentist in the past year.

‘If some of our Halloween tips for protecting teeth can be followed all year round, this will make a huge difference to children’s oral health.’

By the age of five, around a quarter of children in England suffer tooth decay, which can cause agonising pain.

Around 35,000 children are admitted to hospital to have decaying teeth extracted every year.

It is caused by sugary diets. Bacteria in plaque turn sugar into acid, which breaks down the surface of the tooth, causing cavities.

And health officials last week ruled everyone in Britain should have fluoride added to their water.

The UK’s four chief medical officers say adding the mineral to water would help to combat tooth decay, which costs the NHS millions every year.

Ministers are likely to accept the advice, with Health Secretary Sajid Javid keen to press ahead with the move.

The health and care bill currently going through parliament would allow ministers to order council chiefs to put fluoride in drinking water across the country.

Around 5.8million Britons live in areas where fluoride – also added to toothpastes and mouthwashes – is already placed in tap water. And 300,000 drink supplies naturally fluoridated by rocks in the ground.

Professor Chris Whitty and fellow officials recommended the scheme is widened to include the rest of the country.