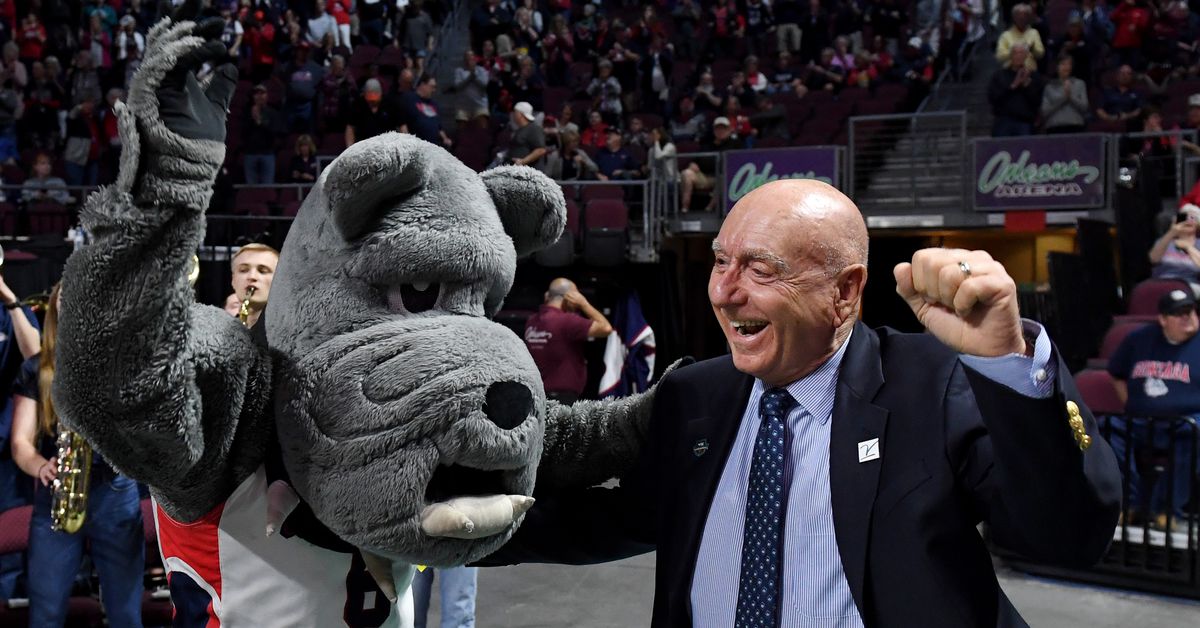 Tuesday in Las Vegas, Gonzaga and UCLA — the Nos. 1 and 2 college basketball teams in the country — will get after it.

There is zero chance they’ll play as unforgettably as they did April 3 in Indianapolis, when the Zags won 93-90 on a Jalen Suggs 40-footer at the buzzer in overtime of a Final Four semifinal.

It doesn’t even matter. The action on the court will play second fiddle to a bald, boisterous 82-year-old sitting courtside: Dick Vitale, making his ESPN return one month after being diagnosed with lymphoma and three months after undergoing surgeries to remove melanomas. It’s the first game of his 43rd season behind the microphone.

Dickie V is early on in a six-month chemotherapy program.

“My family and I are absolutely jumping with joy,” he said. “Knowing I’ll be courtside and calling No. 1 vs. 2, this is the best medicine I could ask for. To all of you, I simply say thank you from the bottom of my heart for your prayers and messages, phone calls and texts. They gave me energy and lifted me up at a time that is not Fun City.”

Dr. Richard Brown, Vitale’s oncologist in Sarasota, Fla., offered this in a statement: “Although a cancer diagnosis can be challenging at times, with Dick, and especially his passion for sports, we feel it is best for him to continue doing what he loves most — calling games and being Dick Vitale.”

The Bears have lost four games in a row, are without Khalil Mack for the rest of the season and haven’t won coming off a bye week since 2013. Other than that, they have the Ravens right where they want them.

Anybody up for a Dak Prescott-Patrick Mahomes shootout? We’d like to think Mahomes, a native Texan, won’t have any mixed feelings about trying to beat the team he grew up rooting for.

They’ve already met once at the United Center, with the Knicks handing the Bulls their first loss of the season. But the Bulls have been the far better team since.

Big fella Kofi Cockburn makes his season debut for the Illini, who should win this one in Kansas City, Mo. Yeah, we know, that’s easy for us to say.

Look, we’ve all assumed Giants teams couldn’t beat Tom Brady before. And how did that go?

The Wildcats come in 4-0, with Pete Nance playing exceptionally. Knock off the Friars in Newark, N.J., and some of us might have to start paying more attention.

Man, the Flames are absolutely filthy at both ends of the ice. The only way to beat them might be for Derek King to distract them with his extreme likability.

Drew Timme and Chet Holmgren for the Zags. Johnny Juzang and Tyger Campbell for the Bruins. Let’s get it on, people.

What an opportunity this is for the Ramblers to battle against the big boys in the Bahamas. Next up: Auburn or Connecticut on Thursday.

Consider it a glorified practice against by far the worst team in the NBA. You’d better believe Houston is already tanking for that No. 1 pick.

This should be a fun one even if it means getting your ear bent by Cousin Earl, who’s in four fantasy leagues and still doesn’t realize the Raiders left Oakland.

Squint hard and you might catch a glimpse of Mitch Trubisky on the visitors’ sideline. He’ll probably be enjoying himself more than he did the last time he was in New Orleans for a game.

You can watch this one if you want to badly enough. No judgment from us either way.

Duke superstar freshman Paolo Banchero should be out there even though the potential 2022 No. 1 pick was charged last week with aiding and abetting a DWI in which coach Mike Krzyzewski’s grandson was the driver.

Well, this is exciting. Winner takes the Big Ten East and locks into prime position for the playoff.

Is this exciting? If the Illini win, they might be one of those look-the-other-way 5-7 teams that gets invited to a bottom-rung bowl game.

Or maybe you’d rather watch the Iron Bowl, the rivalry Ohio State-Michigan secretly wishes it were.

Listen, credit to the Irish for going into the final Saturday of the regular season with a shot — strong or not — to get into the playoff. They weren’t supposed to be this good, you know.