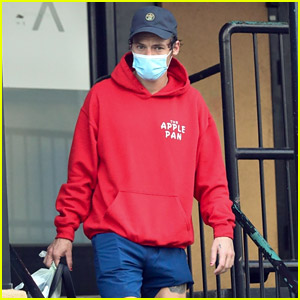 Harry Styles is currently in Los Angeles for his Love On Tour shows and he was spotted at the gym on his day off!

The 27-year-old singer and actor wore a sweatshirt from L.A. burger joint The Apple Pan while leaving a workout on Thursday afternoon (November 18) in the Silver Lake neighborhood of Los Angeles.

Harry performed a show at L.A.’s The Forum on Wednesday night and he has shows there on Friday night and Saturday night as well. The tour ends next weekend in New York.

If you haven’t heard the news yet, Harry has joined the Marvel Cinematic Universe as Eros and made his debut in a post-credits scene in Eternals. Here’s what he had to say about his exciting new role!