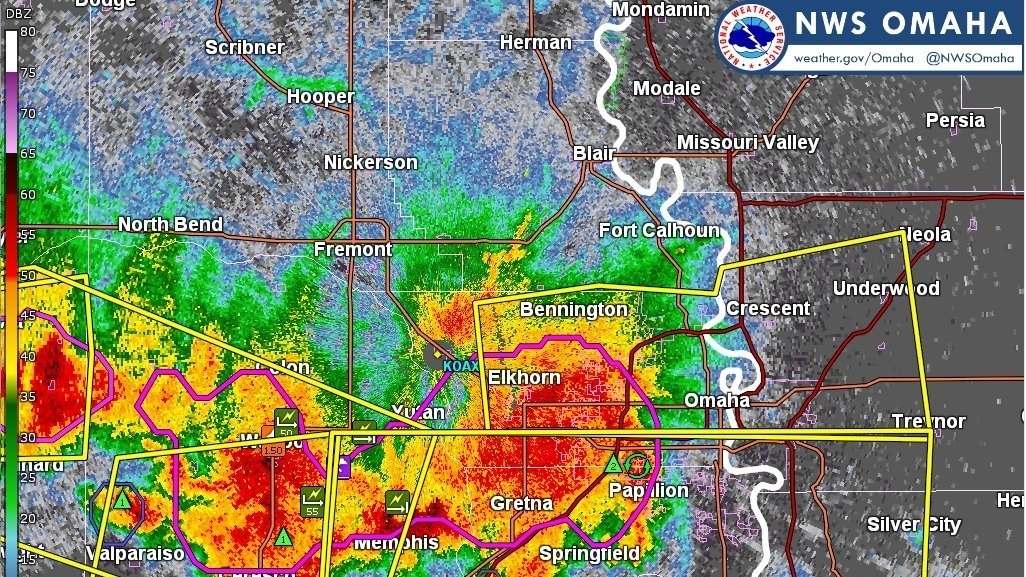 Thunderstorms were accompanied by 60 mph winds and quarter-sized hail.

Water rushed through the streets of downtown and midtown, the Omaha World-Herald reported, damaging roads and leaving dozens of motorists stranded.

Some 18,000 residents were left without power at the storm’s peak Saturday. The Omaha Public Power District said crews worked throughout the night to restore services to customers, but 165 customers were still without power as of Sunday evening.

Residents posted video of the flooding on social media:

The National Weather Service reported parts of Omaha received an estimated 3 inches of rain, but some surrounding areas may have received nearly double that. And while the severe weather storm has passed, residents and motorists are advised to stay home and off the roads.

Some local businesses said they would be closed as they assess and clean up flood damage.

The Omaha Police Department warned residents of missing manhole covers, debris in roadways and standing water over Twitter. No deaths or major injuries were reported as of Sunday.

Though the severe weather and heaviest rain has ended, please use caution while traveling in various areas of #Omaha. There are reports of manhole covers missing, debris in the roadways, as well as flooding/standing water. #UseCaution https://t.co/DHBzq4t7l9

The rains have stopped and the skies have cleared, but the city may not have long to recover before the next storm hits. The NWS is forecasting temperatures in the mid-to-high 90s Monday, which could bring another round of severe storms.

The city was battered by severe weather just over a month ago. The storm brought high winds with gusts as high as 100 mph and left about 188,000 customers without power, the largest outage in 13 years, The Associated Press reported.

Extreme weather events such as flooding are expected to become more frequent and severe as a result of climate change.