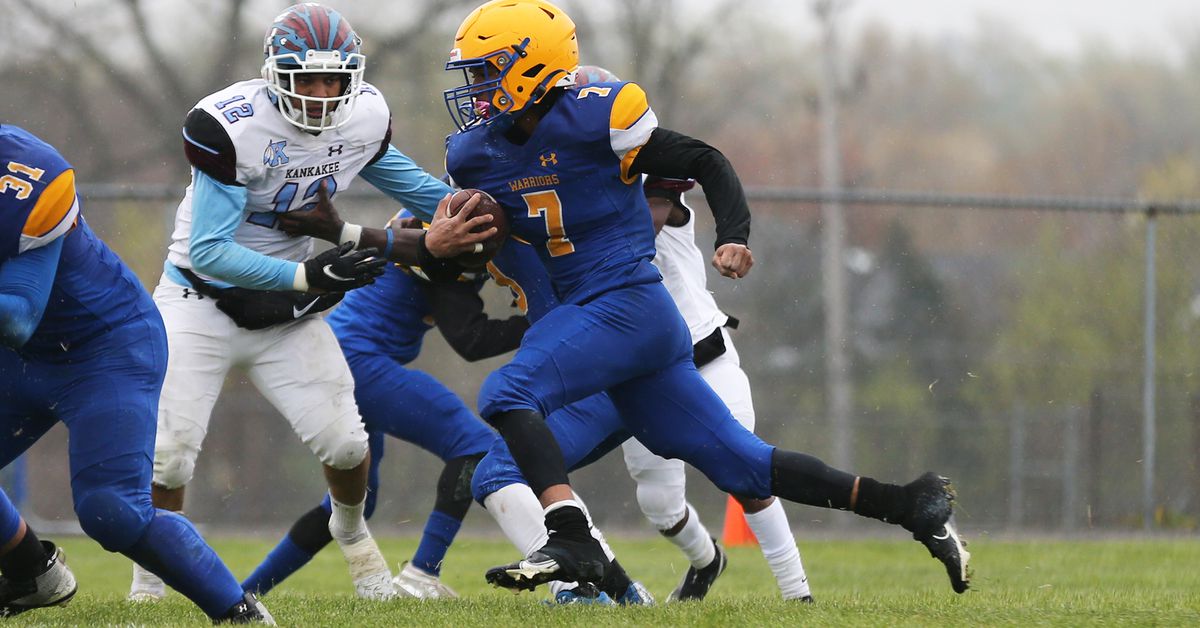 Joshua Franklin and his coach, John Konecki, were too caught up in the moment to realize just what had happened when Crete-Monee played Thornwood on Sept. 17.

“I didn’t know at all,” said Franklin, the Warriors’ junior quarterback.

But his mother did.

“My mom had asked me to ask the stat keeper [about his numbers],” Franklin said. “He told me and I was amazed.”

Konecki said he was just focused on the next play all night long.

“[The game] was back and forth and we just exploded,” he said. “I got the stat sheet and I was like, ‘Oh. OK.’ … It was one of those deals where somebody was in that state of flow.”

Usually, Franklin is flowing from one sport to the next. When the 6-foot, 167-pounder was younger, he did five of them: football, baseball, basketball, track and wrestling.

Even now in high school, he still does four, splitting his time in the winter between football and wrestling.

“I have to talk to both of my coaches to work around the schedule,” said Franklin, who doesn’t want to give up either one. “I’ve been playing both since I was little.”

Ditto for football, where he got his start with the University Park Lions.

“He came in as a freshman, played a little on varsity, we were able to see a little bit of that athleticism,” Konecki said. “Then COVID hit.”

But even a pandemic didn’t slow down Franklin. He worked out at home and did some seven-on-seven events on a team thrown together for the purpose with some friends from his youth football days.

Konecki marvels at Franklin’s motor. “He’s go, go, go — he’s been that way forever,” the coach said. “I tell him, ‘It’s OK sometimes to stay on the couch.’”

But sport is life for Franklin. He was a state medalist in the triple jump during the spring track season and is starting to get Big Ten and Mid-American Conference interest in football.

“He reminds me of those guys when they were younger,” Konecki said of Franklin.

Can Franklin reach similar heights? His coach isn’t betting against it.

“He’s a great leader, a tremendous kid to be around,” Konecki said.

The scary thing for opponents? Franklin is still getting used to playing quarterback after coming to high school as a wide receiver, defensive back and kick returner (he’s still doing the latter two).

“I had some games where I had some mistakes,” he said. “I’m still learning the position, but I’ve got a great quarterback coach [Quincy Woods].”

And as the numbers showed that night in September, he’s getting the hang of it.