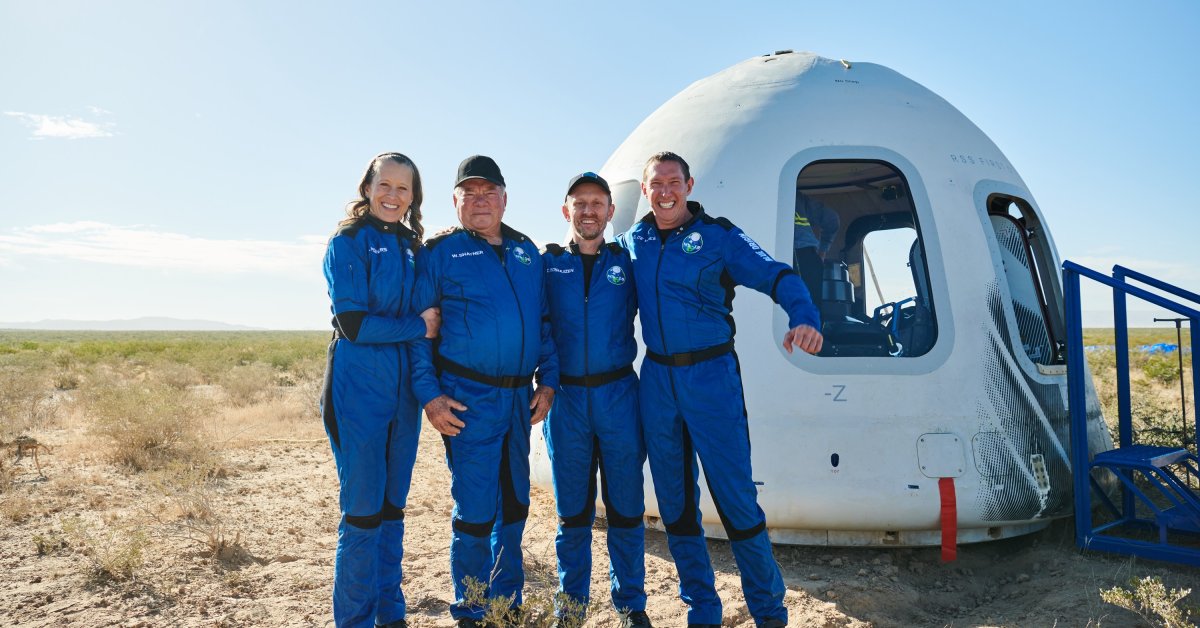 A version of this article also appeared in the It’s Not Just You newsletter. Sign up here to get a new edition delivered to your inbox from Susanna Schrobsdorff every weekend.

“I was moved to tears by what I saw, and I come back filled with…overwhelmed by sadness and empathy for this beautiful thing we call Earth.”

—Actor William Shatner upon returning safely home from his brief trip into space aboard a Blue Origin rocket on October 13th.

When William Shatner, the man who played the legendary Captain James T. Kirk on “Star Trek,” clambered out of a rocket capsule and into the west Texas desert, he was embraced by Jeff Bezos, Blue Origin’s founder and one of the richest men on this planet.

Getting Captain Kirk to fly Blue Origin was quite a P.R. coup for Bezos’ private spaceflight company in what has become a space tourism race amongst billionaires. But perhaps not in the way that Bezos might have imagined.

From the moment he stepped off the landing pad, and on every news show after that, Shatner spoke poetically and with Kirkian emotion about his ten-minute trip to the edge of space and how he saw death out there in the endless dark. He said seeing the Earth at that distance evoked a deep sense of mortality not just his own as a 90-year-old man, but in the threat to Earth as we continue to pollute the thin blue atmosphere that makes life possible down here.

Leaning into Bezos, with tears in his eyes, Shatner described those layers of atmosphere as “this comforter of blue that we have around us.” And he went on to talk about what it felt like blasting through the 50 miles of that Earthly blanket at 2,500 miles an hour:

“Oh, that’s blue sky. And then suddenly you shoot through it, all of a sudden like you whip off a sheet when you’ve been asleep, and you’re looking into blackness. Into black ugliness.”

As he spoke, the other astronauts (or “customers” as Blue Origin’s Livestream hosts called the flight’s two paying passengers) and a Blue Origin executive who was also on the flight cheered and jumped and sprayed champagne on each other. Shatner went on, gesturing downward: “There is mother and Earth and comfort. And then, looking up, he said: “Is—is there death? Is that death? Is that the way death is?”

Bezos, also in a bright blue flight suit, pinned insignias on his four astronauts looking like the head of a small country. In a way, he is a kind of nation-state as the founder of the ubiquitous Amazon which dominates online commerce and cloud computing, and a man whose personal fortune at somewhere between $189 billion and $200 billion which is more than NASA’s entire budget. Bezos has pledged to give $1 billion per year toward environmental conservation over the next ten years. His critics suggest that’s too small a figure given Amazon’s carbon footprint and estimates that Bezos made about $70 billion last year alone.

But on this day, there was little debate over those larger questions as Shatner accepted the insignia and thanked Bezos for the gift of a profound experience that he didn’t want to ever recover from, adding that everyone should be able to see Earth the way he had. Bezos replying: “I’m very excited about your ability to communicate this.”

And from there, Captain Kirk was on every network show his plea for the planet and the health of our grandchildren and their children becoming more forceful with each iteration. It was glorious to watch T.V. hosts try to steer Shatner away from talk of death and toward the fun of being up there after playing a spaceship captain for decades. Shatner gamely made jokes about being 90 but then he would inevitably bring them back to his more significant point, that we can’t keep “burying our heads” in the sand about global warming. He told CNN’s Chris Cuomo: “I wish could bring a message of lightness to leaven the terrible news you keep announcing,” but “we’re at a tipping point.”

Sign up here to get an essay from Susanna Schrobsdorff every weekend.

Despite the mission statement on Blue Origin’s site, which talks about bringing millions of people to live and work in space, Shatner went on to tell Cuomo: “Space is cold and ominous and ugly, and it really threatens death, there’s death there. And you look down, and there’s this warm, nurturing planet.”

I spoke to Shatner a few years ago on the 50th anniversary of the original “Star Trek.” He talked about the climate crisis fervently then too. He’d read Rachel Carson’s environmental classic “Silent Spring,” 40 years ago and lamented that we didn’t take the threat to humanity more seriously then.

“We’re here because of technology. And it seems the only way out of it is technology,” he said suggesting that we use science to develop a way to get carbon dioxide out of the air, and dismissing ideas of moving humanity to another planet as a “fantasy.” He believes that in our bickering about a billion here or there, we’re wasting time. “We seem to be vainly beating out fists against the windowpane of extinction.”

In many ways, Shatner doesn’t sound so different from Carl Sagan, the famed American astronomer, who also dismissed the idea that there’s a backup home for us:

“Our planet is a lonely speck in the great enveloping cosmic dark. In our obscurity, in all this vastness, there is no hint that help will come from elsewhere to save us from ourselves.”

When TIME’s Jeffrey Kluger asked Shatner this week whether he’d want to cross that line between Earth and outer space again, he said he wasn’t sure, noting that at 90, who knows how much time he has to be here in the beauty of this planet. “I’m calling you from my beautiful home, overlooking the San Fernando Valley,” he said. “The sun comes up. I’ve had a lovely egg sandwich my wife made, my two dogs love me, and I’m sitting in a comfortable chair, and I’ve just come from this thrilling thing of life.”

When I asked Shatner about “Star Trek”‘s legacy and why it still inspires people today even though it was, in his words, a fantasy., he said: “Star Trek proposes that technology four hundred years from now will have solved all these problems,” he said. “And that is one of the appeals of Star Trek–that it says the future exists, that we will exist.”

Write to me at: Susanna.notjustyou@gmail.com, or via Instagram: @SusannaSchrobs. And, sign up here to a new edition of It’s Not Just You every weekend.

Here’s your reminder that creating a community of generosity elevates us all.

Arizona single mother of an 8-year-old boy, Karina, is a survivor of domestic violence and has been doing her best to stay afloat. Karina is a small business owner was hit really hard during the pandemic but as she says “she has managed to get by every month to meet my basic needs.”

Just when she thought things couldn’t get any harder, her son began to feel weak and was diagnosed with a rare genetic blood disorder. Not being able to work while spending weeks at a time at the local Children’s Hospital, she began to fall behind on her rent and was also at risk of losing the office space for her business.

Karina heard about Pandemic of Love on comedian Chelsea Handler’s Instagram page and decided to reach out to the organization in a last-ditch effort to catch up.

The organization’s Arizona chapter leader connected her to a recurring donor named Joannie. Joannie was so touched by Karina’s story and connected with her on the phone saying that “Karina reminded me so much to my younger sister who passed a few years back – hardworking, determined and filled with unconditional love for her son.”

Joannie could only help Karina with one month’s rent but wanted to do more. She formed a “giving circle” with her friends at her local church and book club and with 20 women chipping in for $100 each, they were able to present Karina with enough money to provide her relief for two additional months.

Karina wrote to Pandemic of Love in disbelief:

“I’ve been operating from a belief that I am alone, and now I understand that I am not. I’m surrounded by strong women in my community. And I’m so grateful.”

Story courtesy of Shelly Tygielski, author of “Sit Down to Rise Up” and founder of Pandemic of Love, a grassroots organization that matches volunteers, donors, and those in need.

Meet Annie, submitted by Linda who writes: “She is a shy, 70-pound red lab. She is shy and a homebody …. perfect for a pandemic. To her, we owe our sanity, our reason to walk every day, and the ability to see life through her eyes. She knew of course nothing about the pandemic but I think she realized we were home 24/7 with her and boy was she spoiled!”

Write to me at: Susanna.notjustyou@gmail.com, or via Instagram: @SusannaSchrobs. And, sign up here to get an essay every weekend.