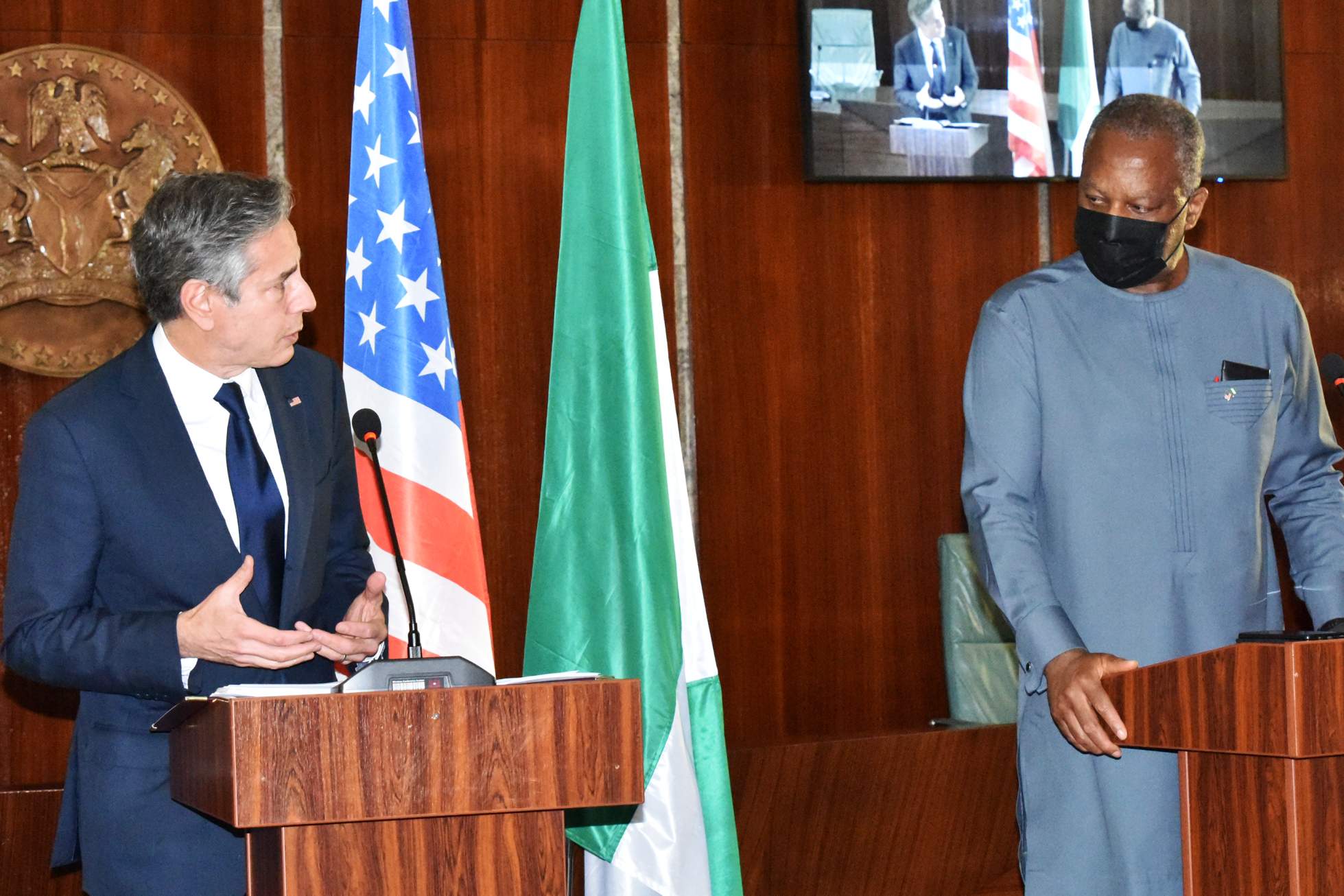 Nigeria’s worsened internal struggles now provoke debate among specialists about whether to describe the country as a “failed state.” Apart from such debates over labels, what is clear is that Nigeria’s instability is rooted in a vital shortcoming: After 61 years of independence, the country still struggles to cultivate a national identity rooted in people’s basic freedoms and dignity. The evidence is in Nigeria’s upheavals: nationwide protests, such as last year’s #EndSARS campaign against police brutality; major armed insurgencies across the North; secessionist movements in the South; and uncontrolled criminality, such as kidnapping for profit. Although Nigeria’s constitution and other declarations of national purpose formally guarantee those basic freedoms and dignity, in the lives of 206 million people, those promises are routinely held meaningless — often by the state that is meant to uphold them.

Nigerian political leaders rhetorically romanticise Nigeria’s “unity,” but do little to cultivate it. To the contrary, they often stoke ethnic and regional tensions in election campaigns. The southeastern state of Anambra, a focus of the Biafra secessionist movement, suffered arson and killings by unidentified gunmen and protests by the secessionists against a state government election earlier this month. Voter apathy, a growing problem in Nigeria’s democracy, weakened voter participation to a paltry 10 per cent. Nigeria routinely suffers pre-election violence, although most international engagement on elections continues to focus more narrowly on the actual day of voting. The Anambra election, along with nationwide political violence that has killed 8,500 Nigerians so far this year, is a warning sign for Nigeria’s national elections scheduled in 15 months.

Despite the presence of secessionist movements amid Nigeria’s turmoil, most Nigerians seek unity, not division. “A majority of Nigerians value diverse communities, identify equally with their ethnicity and nationality, and believe there is more that unites Nigerians as one people than divides them,” the nonpartisan research group, Afrobarometer, reported this year on the basis of its most recent periodic opinion survey. An Africa Polling Institute survey this year found Nigerians “more divided” in 2021 than in recent years, yet with 63 per cent “willing to cooperate” in building unity. These data, alongside Nigeria’s increasing upheavals, reflect a growing recognition by many citizens that there is something structurally broken in the country. It is Nigeria’s brokenness, not its unity, that people are protesting.

Achieving a working democracy and the improved governance that can meet people’s needs and halt violent turmoil will require Nigeria’s power structures to broaden their dialogue with society, including groups now excluded from influence — and to apply changes to build the trust and inclusion that now lack. Nigeria’s central government held a five-month “National Conference” in 2014 that proposed limited changes to the structures of government — yet nearly eight years later, even these have not been implemented. To support a more thorough dialogue that permits change, the United States must undertake with Nigerians its own dialogue, of unprecedented breadth and honesty, about the failings of the past six decades.

This will require several changes to past practice:

America’s engagement with Nigeria is with its centres of power — the state and the institutions and corporations that dominate Nigeria’s oil production and its financial industry. But real engagement requires Americans and others to now see two Nigerias. The deep divide between the country’s power centres and more than 140 million citizens younger than 35 means America needs to open a focused dialogue with that more youthful Nigerian nation. Nigerians who are excluded from institutional political and economic power, many of them young, have built their own identity as “Naija” — the marginalised-but-resilient Nigeria whose citizens take pride in surviving the abuses of the state through ingenuity and entrepreneurship. The state this year demonstrated its deep disconnection from many Nigerians by banning the operation of Twitter, which countless Naija entrepreneurs use to launch and run businesses.

The United States missed its biggest recent opportunity to recognise Naija when the Trump administration was slow to publicly condemn the Nigerian state’s violent suppression of last year’s protests against human rights abuses by police. A Nigerian judicial inquiry this week found army troops culpable in the killing of at least 11 unarmed protesters in 2020 — and the US Embassy this time was swift to support the effort to establish accountability for the killings.

Last year’s protests against police brutality offered a glimpse of how Naija’s youth use social media to find and share solutions for manifold problems — joblessness, bureaucratic obstructions by the state and others. It showed that Nigeria’s youth can claim a seat and drive the agenda in a national debate over how to build, for the first time, a truly democratic Nigeria. A campaign by young Nigerians wrested a change from the state in 2018 — a reduction in the minimum age requirements for some elected officeholders. But that cannot be simply a singular advance. Neither the United States nor any partner can truly help Nigeria recover from its decline unless it is as energetic and focused in its engagement with Naija as with the government of Nigeria.

Second, engage deeply with the communities from which Nigeria’s secessionists arise. The United States needs to understand and respond to the impulses for secession, if only to model the approach for hesitant Nigerians. At least, two major movements now demand secession from a state they feel cannot represent their communities. In the South-East, the Indigenous Peoples of Biafra movement and other groups seek separation for ethnic Igbo people. The Oduduwa movement seeks the same for ethnic Yoruba in the South-West. Secessionist sentiment also simmers in the Niger Delta region and North-Central Nigeria. While Nigeria’s government formally affirms Nigerians’ right to free expression, it periodically has suppressed nonviolent secessionist advocacy by force.

The US diplomacy and peacebuilding efforts should promote dialogues with these dissident communities to help open a path for Nigeria’s government to do so. Only that engagement can halt or reverse the steady growth of extremist, separatist and violent responses among Nigerians. Like any peacebuilding initiative, that engagement must be shaped by a detailed understanding of how different communities perceive their conflicts with the state. Research for that analysis is underway.

Third, work more with Nigeria’s disparate states. The country’s 36 states hold significant power in the realpolitik of Nigeria — and they are distinct enough to warrant specific attention. America should decentralise its engagement with Nigeria by strengthening its dialogues with, and support to, government and civic leaders at the state and local levels. This approach has shown its value over the past seven years in partnerships that USIP has built with state governors and grassroots groups, creating direct channels of communication that these Nigerian partners have used to solve longstanding problems. An example: The recently established peacebuilding agencies of Kaduna and Plateau states worked with Nigerian mediators to finalise a peace accord last year that halted years of violent conflict along the two states’ joint border.

Shifting America’s partnership more toward Nigeria’s states is vital to the work of ending Nigeria’s dozens of armed communal conflicts. The peacebuilding agencies established in three states so far represent a start, and citizens’ groups are seeking greater state and local leadership in ending conflicts. Still, institutionalising effective mechanisms for building peace nationwide will require consistent, focused work. To eventually stabilise, Nigeria will have to transform its cultures of political, economic and civil rights — a change that must be built from the ground up with support from the United States and Nigeria’s other international partners. The present moment, including Secretary Blinken’s visit, is an apt time to signal and to begin that turn in policy, for fully half of Nigeria’s state governors have served their maximum two terms in office, meaning that the country will see a heavy turnover in these powerful offices in 2023.

Helping Nigeria institutionalise the practice of peacebuilding at the state levels means setting a priority now on ensuring continuity under the new governors who will take office in less than two years.

A US-Nigeria partnership focused on honest dialogues that promote peacebuilding amid conflict can help to sow in Nigeria the vital conversations that will be the only source for real solutions. The United States cannot pretend to offer solutions — but it can change old practices that fail to advance the dialogues that Nigerians can use to reverse the country’s long and now dangerous slide into dysfunction. America’s own vital interests argue that it should do so.

Oge Onubogu is the director of the West Africa programme at the U.S. Institute of Peace