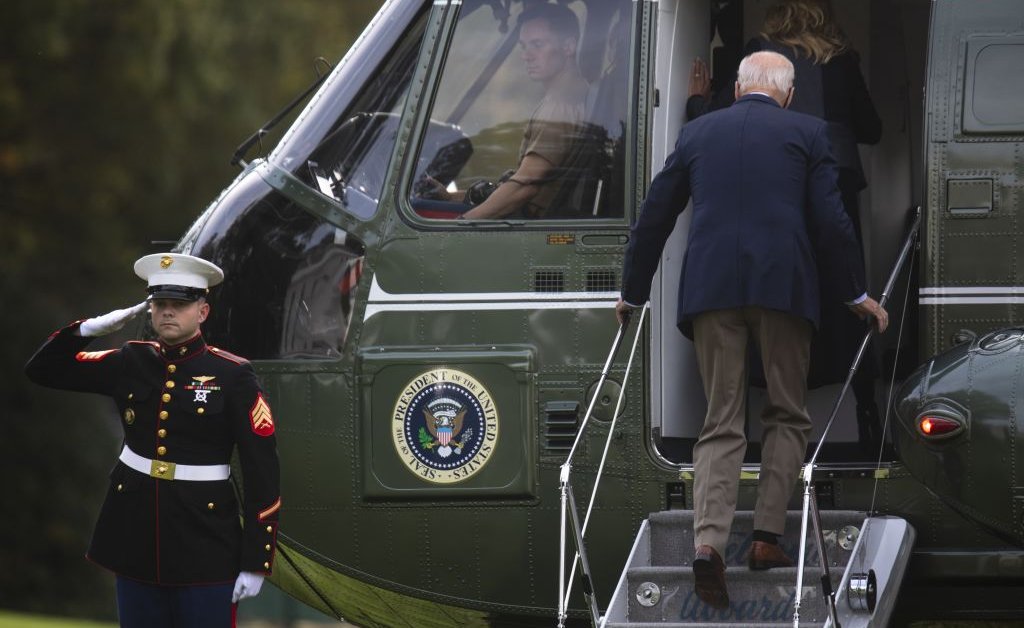 When Joe Biden met with allies on the west coast of England in June, he spent time assuring the world that Donald Trump’s impulsive diplomacy and pattern of insults and discord was over.

Now as he leaves on his second foreign trip as President, Biden has his own repair work to do.


Allies are rattled by Biden’s chaotic withdrawal from Afghanistan and his ham-fisted handling of a decision to snub France and share submarine technology to Australia, and world leaders gathering for a crucial climate change summit in Glasgow are still waiting to see if Biden can close a deal in Congress for massive spending to slash the U.S.’s carbon emissions.
[time-brightcove not-tgx=”true”]

Biden knows the global stakes of his domestic agenda. Delivering the trillions of dollars in investments he’s proposed in bridges, roads, broadband access, low-carbon energy technologies, education, health care and childcare assistance is “about leading the world or letting the world pass us by,” Biden said Thursday.

But he wasn’t able to leave the country with a deal secured. He tried to sell a compromise on his economic investments in infrastructure, climate change jobs and social programs to Democrats gathered in the U.S. Capitol Building Thursday hours before taking off for Rome. He released a framework for his social spending plan and jammed a White House speech on his schedule. But it wasn’t enough. As Air Force One lifted off, Biden was still short of getting a solid agreement. Progressives wanted more details about the social spending bill and reliable assurances the two holdout Democratic Senators, Joe Manchin of West Virginia and Kyrsten Sinema of Arizona, would vote to pass it if progressives agreed to support the bipartisan infrastructure bill.

Biden’s own uncertainty showed through as he started speaking from a lectern in the White House East Room and caught himself mid sentence. “After months of tough and thoughtful negotiations I think we have—I know we have—a historic economic framework,” Biden said.

The push to act like there was a major breakthrough in the negotiations just as Biden took off for Europe highlights how much the President had hoped to use the deal to show the world that a democracy like the U.S. can still deliver big, transformational changes. Instead, Biden’s time overseas will be marred by political squabbling within his own party, sagging job approval ratings, and his Administration’s struggles to get grips on supply chain problems and a lengthening pandemic. (The White House says Biden will stay involved in negotiations by phone in between meeting with Pope Francis at the Vatican, attending the G20 Summit in Rome and the U.N.’s COP26 climate summit in Glasgow.)

Read More: John Kerry Is Bringing America Back Into the Climate Fight

In addition to continuing to haggle with Congress, Biden has to work to simmer down relationships with the U.K. and France that boiled over in recent months. “Some of the other relationships, as we all saw, particularly with the U.K., were also strained in the wake of the hasty withdrawal from Afghanistan,” says Amanda J. Rothschild, a former national security speech writer for Trump who traveled with the 45th President to the G20 Summit in Osaka, Japan in 2019.

Leaders of allies supporting the previous Afghan government, including U.K. Prime Minister Boris Johnson, were furious at Biden’s decision to precipitously withdraw U.S. forces from Afghanistan at the end of August, given how much the allied forces and aid projects relied on the U.S. military’s presence in the country. Johnson argued for the U.S. presence to continue longer in Afghanistan, predicting that the lack of air cover would sap the Afghan military’s ability to confidently defend itself and cause Afghan forces to cave to the Taliban advances.

The Biden Administration’s hesitancy to lift COVID-19 travel restrictions on European travelers coming to the U.S. before November has also frustrated allies, even as vaccination rates in Europe have proven better than those in the U.S. in recent months.

One of Biden’s first meetings on Friday in Rome is with French President Emmanuel Macron. There was “shell shock” in Paris, says Benjamin Haddad, senior director of the Europe Center at the Atlantic Council, after the U.S. announced in mid-September that it would be sharing nuclear-powered submarine technology with Australia, rendering obsolete a $90 billion French submarine contract with Canberra. The French ambassador to the U.S. was recalled within days for the first time in the 250-year-old relationship between France and the U.S. The decision, and what French officials saw as insufficient consultation, created a “breach of trust,” says Haddad, that Biden needs to repair.

Macron, who is facing an upcoming election in April, has been under political pressure to take a tougher stance with the U.S. Biden and Macron are expected to talk about Macron’s desire to get the U.S. to embrace a more autonomous European defense alongside the North American Treaty Organization (NATO), a move Macron will likely push forward when France holds the rotating European Union presidency in early 2022.

For four years, Trump amplified tensions with Europe when he demanded new trade terms and harangued allies for not devoting more domestic funding to their military contributions to NATO. But there are some structural changes in the U.S. approach to Europe that go beyond Trump, says Haddad, including the U.S.’s effort to shift its long term foreign policy focus toward countering the rise of China’s influence and authoritarianism in Asia. “I think there was probably too high an expectation that we could just turn the page over the last four years,” says Haddad.

But the White House says Biden is going to try. “The entire trip is a reaffirmation of our commitment to our allies,” says a senior White House official.