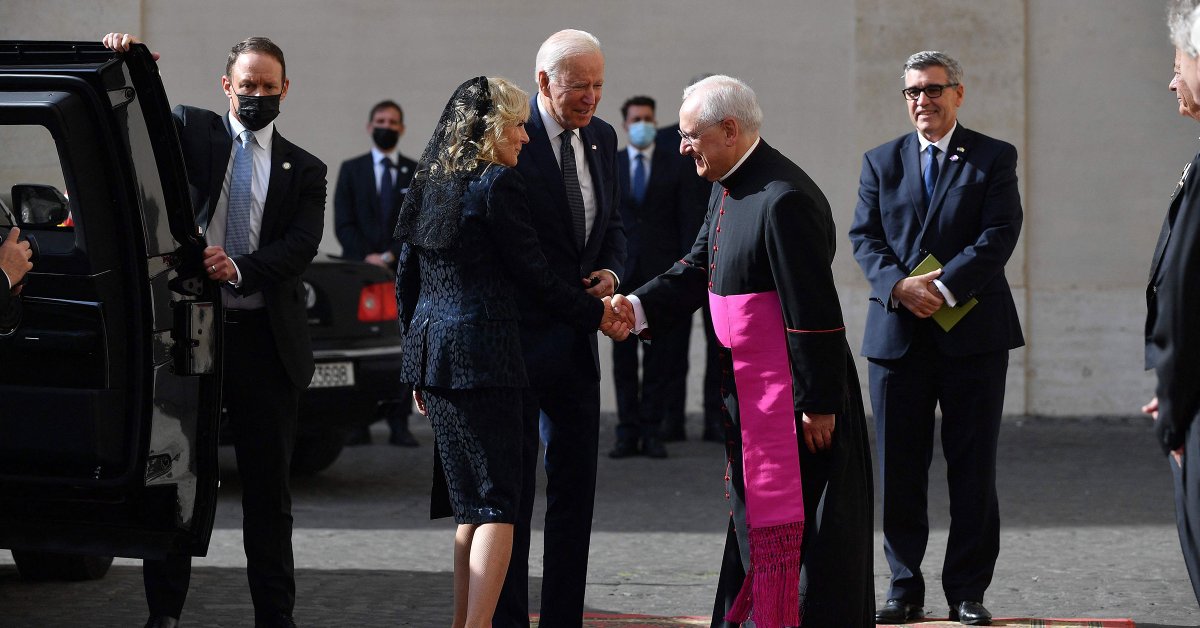 The two men exchanged gifts. President Joe Biden pressed into Pope Francis’s palm a command coin bearing the insignia of his deceased son Beau’s military unit. Pope Francis handed Biden a signed declaration of peace. They sat and talked for 90 minutes in the Pope’s library in the Vatican.

But underlying the warm greetings Friday in Rome was a tectonic fissure among the Catholic faithful in the United States that has been exacerbated by Biden’s presidency. The leadership of the U.S. Catholic church is divided over Biden’s Catholic faith, with many U.S. bishops concerned Biden should not take the Catholic rite of Communion when his Administration and his party advocate for increasing access to abortions, which are opposed by Church teachings. Pope Francis has counseled a “pastoral” approach to congregants like Biden, saying that the matter of taking Communion should be handled in discussions between priests and individual churchgoers.
[time-brightcove not-tgx=”true”]

After the meeting, a reporter asked Biden if the topic of abortion came up in their conversation. “No, it didn’t,” Biden said. “We just talked about the fact he was happy that I was a good Catholic and I should keep receiving Communion.”

The U.S. Conference of Catholic Bishops voted in June to draft a “teaching document” on who should take Communion, which insiders saw as an attempt to rebuke Biden for continuing with the practice while supporting policies that allow abortions. When the U.S. bishops gather in Baltimore in November, the document will be discussed and bishops are expected to vote on its release.

How Biden practices his faith is more than a religious question. Both major political parties have worked to mobilize Catholic voters. Biden has tried to shore up relationships with Catholic faith-based organizations, emphasizing his Administration’s work to address poverty, stop executions and chart a more humane approach to immigration policy. But Republican strategists see potential to make gains among Catholic voters with hardline anti-abortion policies and outreach to conservative Hispanic Catholics who are filling an increasingly larger share of church pews.

All of which gives additional significance to the meeting between the leader of the 1.3 billion-strong Catholic Church and the churchgoing, liberal American President.

Seated with the Pope’s desk between them, they discussed through two interpreters the COVID-19 pandemic, poverty and actions to reduce climate change. Pope Francis said that countries that can donate more vaccines to other nations should, said a senior Administration official who relayed what the President told his staff about the conversation. The Pope emphasized with Biden how climate change was hurting “the marginalized and disadvantaged communities of the world” and that the U.S. should “accelerate our ambition” on climate actions. The Pope didn’t release his version of how their conversation went. Citing COVID-19 protocols, the Vatican didn’t allow American press cameras to televise the meeting.

Over the past several years, Biden and Pope Francis have developed a rapport. “This was a policy meeting. It was also a personal meeting,” the senior Administration official said. About 30 minutes into the one-on-one meeting, a cardinal sitting in a separate room with the U.S. delegation said the length of the meeting was “highly unusual,” and repeated that exclamation every 10 minutes until the hour and a half meeting was over, the official said.

Biden and Pope Francis have met multiple times since Francis became Pope in 2013. Biden escorted Francis during his three-day tour in the U.S. in 2015. The two spoke on the phone after Biden’s victory over Donald Trump in November 2020. Weeks after the election, the Pope sent Biden an inscribed copy of his book, “Let Us Dream: The Path to a Better Future.”

Video released by the state-run Vatican TV showed Biden handing Pope Francis the presidential challenge coin and saying, “You are the most significant warrior for peace that I’ve ever met.” Biden told Pope Francis, “I know my son would want me to give this to you.” Then Biden explained the tradition around military challenge coins: if they see each other again, and Pope Francis doesn’t have the coin, he has to buy them drinks. (Though Biden, a teetotaler, said, “I’m the only Irish man you’ve ever met that hasn’t had a drink.”)

As Biden prepared to leave, he gripped Pope Francis’s hand and told him a story about baseball legend Satchel Paige pitching his first winning game in the major leagues at the age of 42, after being blocked from playing in the majors for decades by racist segregation practices and prejudiced owners. Reporters asked Paige how he felt with the win at his age and Paige replied, “How old would you be if you didn’t know how old you were?” Biden, who is 78, said he would be 60 years old by Paige’s measure, and Biden put Pope Francis, who is 84, at the age of 65.

Biden then walked out of the Pope’s rooms with the parting words, “God love ya!”