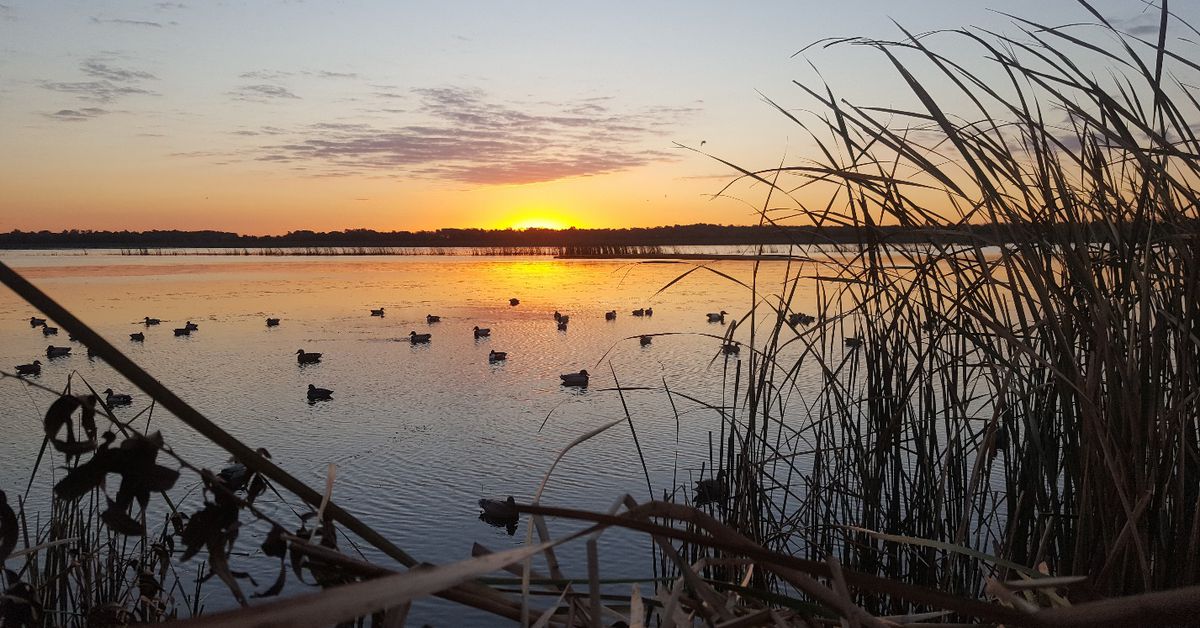 Considering the north zone for ducks and Canada geese opens Saturday in Illinois, Joshua Osborn led with this note after flying the latest aerial waterfowl survey for the Illinois Natural History Survey on Tuesday:

What a difference a week(end) makes! It appears the slight cooling to the north of us, combined with north winds over the weekend may have moved some ducks in our favor.

Near the end of his blog, Osborn wrote:

I look forward to seeing how the birds distribute themselves after the shooting begins!

Here is the overview of the latest aerial waterfowl survey by Osborn, a waterfowl ecologist for the INHS-Forbes Biological Station:

What a difference a week(end) makes! It appears the slight cooling to the north of us, combined with north winds over the weekend may have moved some ducks in our favor. We had great weather and got in the air on Tuesday, October 19th for the waterfowl survey. A water level bump in both rivers has changed the look of things out there, better in some cases and not-so-better in others. I estimated ~130,500 and ~125,000 ducks along the Illinois and central MS rivers, respectively. Both rivers are slightly below the 10-yr average (-3.9% IRV, -6.2% CMRV) but the Illinois saw a significant increase from last week. For those that did not see last week’s numbers, they can be found at www.bellrose.org. There was an increase in dabblers across the board as compared to last week, especially gadwall and mallards. Although a few blue-winged teal are still hanging on; they are, for the most part, gone from our survey area. Notably, our estimate of gadwall is significantly above the 10-yr average along both rivers this week (+48.6% IRV, +27.5% CMRV).

Those to the north are in the early weeks of their hunting season, some of us are on the last homestretch of waiting, and those to the south are anxiously awaiting their turn in November. If last year is any indicator, roughly 1 million waterfowl hunters will take to the marsh across the country this fall in pursuit of ducks and geese. With any luck, they’ll harvest close to last year’s estimate of 14 million. Here in the MS flyway we typically make up ~40% of both the country’s waterfowler numbers and duck and goose harvest, by far the largest percentages of the four waterfowl flyways. If you’ve never dug into these numbers for your state, I encourage you to do so. I know many folks anxiously wait for the well-written summaries published by outlets like Ducks Unlimited or Delta Waterfowl, but the annual report is easy to find online and provides insight into how these numbers are estimated. I’ll admit it’s not the most riveting read but knowing the hunter numbers and harvest estimates by species, state, and flyway can be helpful in understanding the need for management actions at a large scale. Just do a quick search for USFWS Migratory Bird Hunting Activity and Harvest and enjoy!

To wrap this up, there are a lot of hunters in pursuit of their passion all trying to use the same finite resource. We can get complacent, emotions can run high, equipment can break. Any number of things can happen that we don’t foresee. Be safe in the marsh and be excellent to each other. Good luck to the north zone hunters as well as the central zone youth! I look forward to seeing how the birds distribute themselves after the shooting begins!