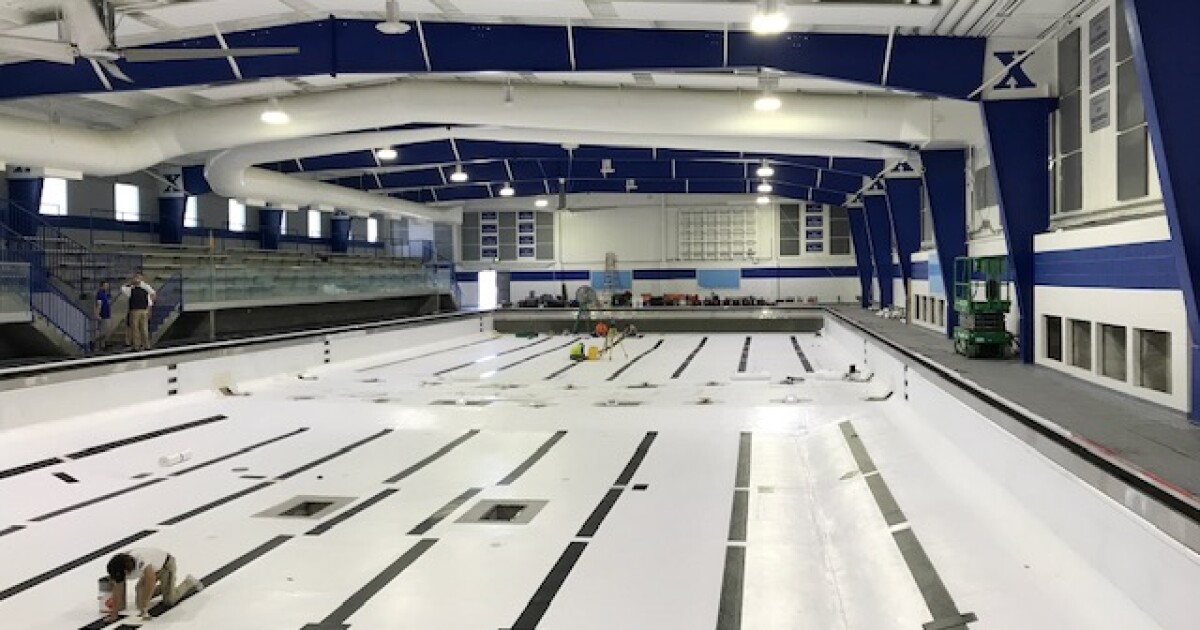 Every square inch has been updated inside the natatorium, which opened in 1969 and has been home to 16 Olympic swimmers, including those from St. Xavier and the Cincinnati Marlins club team.

St. X athletic director Brian Reinhart said Keating Natatorium will hopefully be ready the week of Aug. 23, with plenty of anticipation from the St. Xavier water polo and nationally-recognized swimming and diving programs about a privately-funded project that started in early March.

“We bring visitors in now quite a bit since we don’t have to wear hard hats or anything,” Reinhart said. “And their eyes get big as saucers and there is just a lot of ‘wow.’ And it’s just wonderful to hear the stories that generations of people that have swam here or that have sat in the stands to be a part of Keating Natatorium. And now they walk in and they see a brand new facility, and it’s just they’re in shock just with the renovation and how much better it looks. And again they say it’s more a reflection of the school and of the program.”

The numerous updates for Keating Natatorium include a new stainless-steel gutter system, a new pool liner, a new pool deck, renovated locker rooms and new electric throughout the facility.

The natatorium, which includes an eight-lane, 50-meter pool, will have a replacement of all the pipes and filtration system, a new heating, ventilation, and air conditioning system, new flooring, along with the walls painted or resurfaced.

A swimmer’s lounge allows teams to study film and the ability to watch a live stream from one of the 10 permanent cameras.

“It’s an honor to be really the first team to move back into Keating,” said St. X senior water polo player and swimmer Oscar Haverkamp. “It’s a really cool legacy to be a part of. Looking forward at the future generations that get to use it – it’s really humbling and amazing to see.”

A video scoreboard allows for instant replay and the potential for entertaining introductions before a game or meet. A new sound system and the installation of more than 200 sound panels will also enhance the competition experience.

“When you first walk in– just the aesthetics of it – it feels like St. X’s pool,” St. X water polo coach Paul Splitt said. “So you walk in, and it’s bright. The fact that it’s been so long since there has been any kind of updates to it – it’s obviously been well-needed – but you walk in, and this place just has a different energy about it. It was already amazing, and it just kicks it up that much more. It’s awesome.”

The St. X water polo season, a fall sport in Ohio, is scheduled to start home games inside the natatorium in September.

The AquaBombers have finished in the top four of the National Interscholastic Swimming Coaches Association rankings in 19 of the past 23 years.

“The program speaks for itself,” Reinhart said. “The winningest team of any sport in Ohio. The facility – we want it to reflect the prestige and honor of our team and our student-athletes and our coaches, so this is an important project to be able to reflect.”

There was discussion for years inside the school about renovating the natatorium, but the process sped up about two years ago when Reinhart and St. Xavier president Tim Reilly worked with the school’s advancement office to gauge interest in funding.

“We’re just thrilled with the support of the St. Xavier community, the alumni, the benefactors and just the workers in here and the vision that we’ve had in the last couple of years to finally make this happen,” Reinhart said.

Tom Keefe, a 1968 St. X graduate, has been an assistant coach in the swimming and diving program every year since 1998 and coached water polo at the school prior to that.

He became teary-eyed when describing his personal connection to the natatorium during a weekday morning visit last week.

Keefe credited the Keating family with not only being instrumental in the contributions and fundraising to help build the pool in 1969, but also with helping in this major renovation. The natatorium is named after Charles H. Keating.

“There is no doubt that what the Keating family in conjunction with St. Xavier did to change the culture of swimming in Ohio, regionally and even nationally,” is significant, Keefe said.

Keating Natatorium has been a second home for Keefe, who still has a ribbon from a competition he participated in at the facility in 1970 and later started his coaching career.

“Brian (Reinhart) was asking me did I ever think I’d see a full renovation – probably not in my lifetime,” Keefe said. “It brings back incredible memories, feelings, again a deep sense of appreciation for what it took to get this started, what it took to keep it going during the (1990s) when there was talk about turning it into the wrestling room.”

Keefe was impressed with the progress of each updated detail inside the natatorium. The numerous championship banners are on display.

Keefe said those banners are an important part of the program’s legacy, but thousands of people over the years have made Keating Natatorium a special place in and out of the water.

“The administration stayed with the school, gave us the chance to get better. As you can tell it’s been a remarkable journey for me and to be a part of it and to see this aspect of it is pretty doggone remarkable,” Keefe said. “I think it’s the fact that we are going to come into an environment that is more conducive to training well, competing well and having a more satisfying experience.”