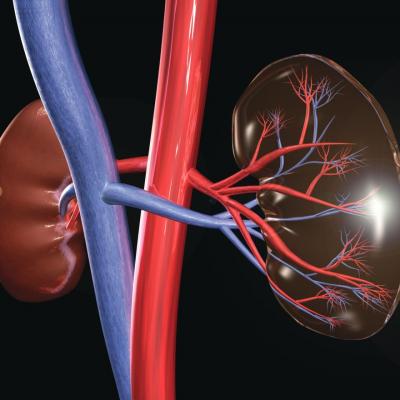 Among 243 men who did not have diabetes prior to undergoing kidney transplantation, levels of both dihydrotestosterone (DHT) and testosterone were inversely related to the risk for developing diabetes the next 5 years.

“These results suggest that androgen insufficiency could play a role in the frequent deterioration of the glucose metabolism after kidney transplantation,” Suzanne P. Stam and colleagues wrote in Diabetes Care.

However, “our study has unfortunately no direct clinical findings as it was of an observational nature,” Ms. Stam told this news organization. “As a result, we can say that we have observed an association and have not established a causal relationship. So based on our study alone there is not a reason to start screening for low androgen values.”

Previous data have suggested that failure of pancreatic beta cell secretion of insulin plays a role in PTDM. In addition, DHT appears to act on the androgen receptor in pancreatic beta cells to enhance insulin secretion, while testosterone deficiency has been shown to play a role in the development of type 2 diabetes in aging males and in men receiving androgen-deprivation therapy. And, randomized clinical trials have found favorable metabolic effects of testosterone replacement therapy in hypogonadal men with type 2 diabetes.

The current post hoc analysis of a prospective single-center cohort study is the first longitudinal epidemiological investigation of the role of androgens in PTDM in kidney transplant recipients. The subjects, all men, had functioning grafts for at least a year posttransplantation. Androgen levels were assessed by liquid chromatography–tandem mass spectrometry.

In unadjusted analysis, every doubling of DHT was linked to a 27% increased risk for PTDM (P < .001). The association remained significant after adjustments for age, estimated glomerular filtration rate, time between transplantation and baseline, body mass index, high sensitivity C-reactive protein, medication use, and baseline hemoglobin A1c (all P < .001). Similar results were found with total testosterone.

Ms. Stam, of the division of nephrology at the University Medical Center Groningen, the Netherlands, noted in an interview that, in the Netherlands, about 15% of those with kidney failure have preexisting diabetes, compared with about 50% in other western countries, including the United States.

She said that her team is currently working on a study to investigate the association between androgens and the development of PTDM in female kidney transplant recipients.

The study was funded by the TransplantLines Food and Nutrition Biobank and Cohort Study, Top Institute Food and Nutrition, and partly by the European Union’s Horizon 2020 research and innovation program. Ms. Stam and the other authors have no further disclosures.