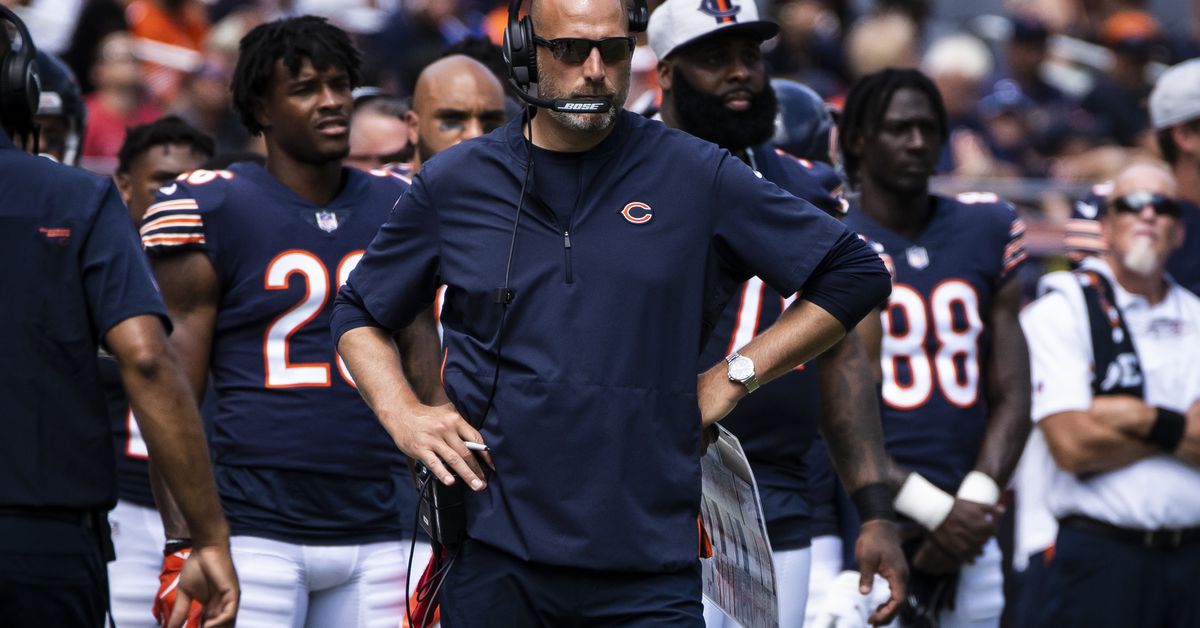 In three games since coach Matt Nagy ceded play-calling duties to offensive coordinator Bill Lazor, the Bears’ offense still has struggled to score points, but at least it’s back on its feet after the wobbly, historically bad nine-sack game against the Browns in Week 3 that precipitated the change.

By establishing a running game — their 117.8-yard rushing average the last three weeks ranks fourth in the NFL in that span — and reasonably protecting rookie quarterback Justin Fields (seven sacks), the Bears at least have a chance for a breakthrough heading into the game Sunday against the Buccaneers at Raymond James Stadium.

It won’t be easy, and the assignment is fraught with potential disaster. If the Bears struggle to run against the Bucs’ top-ranked rushing defense, they better have a Plan B in the passing game, or else.

The doubts that Nagy is the right guy to steer this offensive ship are legitimate concerns. They won’t cease until the Bears score more than 20 points against more than just bottom-feeder NFL defenses. But even Nagy seemed to acknowledge he’s more comfortable with somebody else calling the plays than he was last season, when Lazor called plays for the final eight games.

“It feels good. I like where I’m at,” Nagy said. “I feel like whatever it is, if for some reason the game-day part of me being connected to the offense, defense and special teams and then in between series, it’s just good. I like it.”

Just that Nagy would address it is a sign of progress. While he has yet to snap under the pressure of heavy criticism and pointed questioning as the Bears’ offensive malaise has continued, the play-calling issue was a sore subject when it first became an issue.

“With all due respect, it’s going to be the last time I talk about it,” Nagy said after reluctantly acknowledging that Lazor called the plays in a 24-14 victory over the Lions at Soldier Field on Oct. 3.

It’s probably not Nagy’s favorite subject today, but you can at least tip-toe around it. The game-day operation with Lazor calling plays and Nagy being more of a head coach than an offensive coordinator is still a work-in-progress — like everything regarding the Bears’ offense. But it’s giving Fields a chance to grow, which ultimately will make them all better at what they do.

“It’s really gone well. We’re getting better every day,” Nagy said Friday after practice. “I know I feel really comfortable now going through that, feeling out how the process goes throughout the week, too.

“The game-day specifics have been great for me because I’ve been able to be a part of the headset communication, what goes on, listening, and then situationally, I feel more connected.”

It’s almost certain that Nagy still harbors an expectation to get back to where he was when he was hired — as the Andy Reid-like lord of the offense. But right now, perhaps with his future as the Bears’ coach on the line, he’s finding that delegating a responsibility he cherishes is his best chance.

“I give Bill a ton of credit,” Nagy said, “because I do think that the more and more that he does this with a rookie quarterback, with Justin and with this offense will only continue to get more and more comfortable. And then I can be there to help Bill in whatever that is and the other coaches that are doing that together.

“If you look back to when we first did this to where we’re at now, I’d say for sure every week we feel better.”