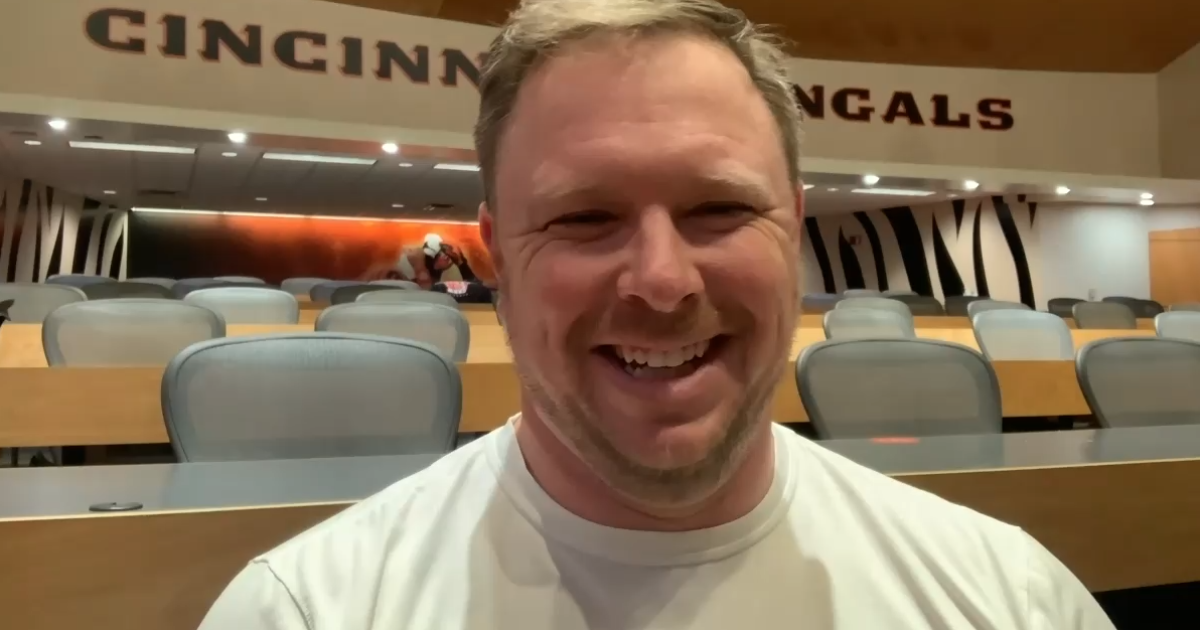 “He’s unbelievable,” Taylor said. “He does everything and probably gets credit for none of it. But, he gets me to this (media Zoom) meeting on time. Otherwise I’d pretty much be lost in my office all day.”

Rosfeld, a former Moeller High School head coach, is in his third season as the Bengals’ director of coaching operations.

Rosfeld, a 1997 Moeller graduate, has coached all three levels of football in his hometown. That includes his time as the director of player development at the University of Cincinnati (2015-17). He also played center at UC (1997-2000) before starting his coaching career.

He is Cincinnati through and through: Rosfeld understands the significance of the Bengals’ Wild Card game against visiting Las Vegas Saturday afternoon.

“I know I saw a bunch of the guys today as they were coming through to get a workout in maybe watch a little film and get some treatment,” Rosfeld said. “They’re excited. The coaching staff is abuzz.”

The same goes for the affable Rosfeld, who does anything and everything for the coaching staff. His duties are numerous and vary on a daily basis.

“He’s kind of the right-hand man for them,” Taylor said.

That includes listening and offering advice when asked by the coaching staff. Rosfeld also takes notes, helps with media obligations and makes sure the scout cards are accurate in preparing for games; he’s also helped with the NFL Draft.

In games, Rosfeld throws the red challenge flag if the Bengals determine an official’s review is needed.

“My primary role is making sure that the operation and the system of our program and our preparation goes off without a hitch,” Rosfeld said.

So far, so good, the boss said.

“Doug kind of keeps everything moving in the right direction,” Taylor said.

“He’s the kind of guy if he didn’t show up for work then probably all of the lights in the building wouldn’t be on and nobody would realize what was happening. But, he’s tremendous. He’s always positive energy. If you see him on the sidelines he’s always kind of first team all-sidelines with his energy level and getting guys hyped up.”

Rosfeld embraced Taylor with a hug on the field after the Bengals’ dramatic win over Kansas City that clinched the AFC North title and a playoff berth.

“The organization has been phenomenal to be a part of,” Rosfeld said. “And the city has wanted it for so long. “I was right with Zac in the press conference and I know he was just working to harness that emotional energy because it was so overwhelming.”

Rosfeld and Taylor have had a good rapport since their days at the University of Cincinnati where they worked together on the Bearcats’ coaching staff in 2016.

Taylor was the UC offensive coordinator and Rosfeld was the director of player development.

Vince Suriano, former UC director of high school and player relations, worked with Taylor and Rosfeld at UC. He’s glad they have this NFL postseason opportunity.

“He’s intelligent and a lot of fun to be around,” Rosfeld said. “And I’ve always gravitated toward people that were authentic and genuine. In Zac you see that innate quality. It’s in his DNA to look to better the people around him and treat them well with respect and to just not hold anything back in terms of effort.”

Taylor said Rosfeld is an integral part of the team in every aspect.

RELATED: Bengals OL Jackson Carman feels ‘blessed’ to be in the playoffs in his rookie season