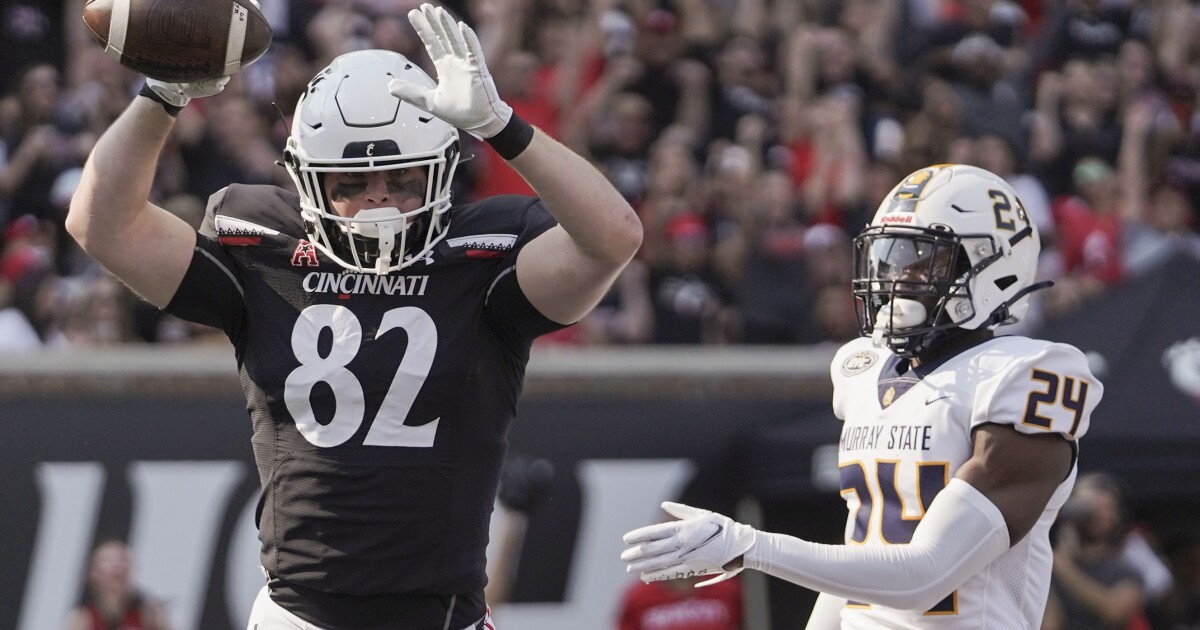 The Bearcats were heavy favorites coming in, but the Racers outgained them 190-83 in the first half and led 7-0 in the second quarter.

The score was tied at halftime before the Bearcats (2-0) scored touchdowns on four of their first five possessions in the second half.

The Bearcats had to overcome some distractions during the week, including an invitation to join the Big 12 and trips to Indiana and No. 8 Notre Dame looming.

Murray State’s game plan to control the clock and keep the Bearcats’ high-powered offense on the sidelines worked well in the first half. Murray State (1-1) held the ball for all but 1:30 of a scoreless first quarter, outgaining the Bearcats 128-7.

Racers QB Preston Rice completed his first five passes but was intercepted in the end zone by Ja’Von Hicks on his sixth attempt. Rice scored on a sneak early in the second quarter to put the Racers ahead 7-0.

Rice threw two more interceptions in the opening half. The second, by Ahmad Gardner, led to a 2-yard TD catch by Josh Whyle on fourth-and-goal to tie the score.

The Bearcats drove 75 yards on 10 plays on the opening possession of the second half. Ford’s 13-yard TD run gave them a 14-7 lead.

Ford added an 8-yard scoring run later in the third quarter, and Ridder’s 23-yard TD pass to Tyler Scott put the game away in the fourth. Scott had four catches for 74 yards.

It was the first meeting between the two schools. Murray State, which was picked in the preseason to win the Ohio Valley Conference for the first time since 1996, has faced three top-10 opponents since 2012.

The Bearcats extended their home winning streak at Nippert Stadium to 22. They haven’t lost there since Nov. 11, 2017, a 35-24 setback to Temple.

Cincinnati accepted an invitation to join the Big 12 Conference on Friday. The Bearcats, along with Houston, Central Florida and BYU, will join the conference no later than 2024. The Big 12 is adding teams following the departures of Texas and Oklahoma.

Both teams are on the road next Saturday. Cincinnati plays at Indiana, while Murray State faces Bowling Green.