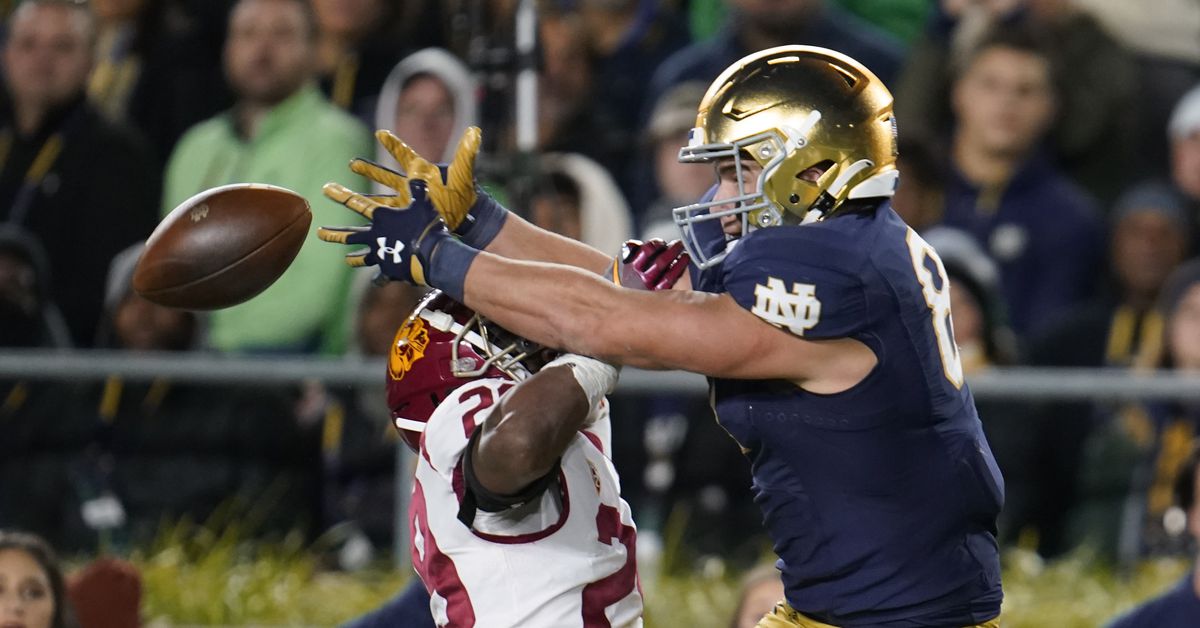 SOUTH BEND, Ind. — Michael Mayer’s return from injury started the same way as his season: with the football in his hands on the first snap of the game.

On Saturday, that took the form of a quick 4-yard pickup to kickstart Notre Dame’s 31-16 win over USC. In the season opener at Florida State, the first play from scrimmage began similarly, with a short throw from quarterback Jack Coan that Mayer turned into a 25-yard gain.

In between was a month of Michael Mayer being Michael Mayer — No. 11 Notre Dame’s most consistent offensive weapon and one of the best tight ends in college football. A hip adductor strain hampered him against Cincinnati and sidelined him at Virginia Tech, but after the bye week, Mayer made a triumphant return under the lights of Notre Dame Stadium.

The 6-foot-4 sophomore has been targeted on Notre Dame’s first or second offensive play in four of the six games he’s played in. Of his 414 season receiving yards, 153 have come on the team’s first offensive drive of the game — 37% of the total. Of his three touchdowns, two are the result of opening drives — putting Notre Dame on the board in the third minute against both Florida State and Toledo.

Mayer said he likes being in the mix early, crediting the opening-drive targets with an initial adrenaline boost.

“I think it sets a tone for the entire game,” Mayer said. “I definitely like that. I like that style of play, and (it) kind of gets me ready for the game.”

Through seven games, Mayer’s 414 yards make him Notre Dame’s leading receiver by a wide margin. George Takacs is the only other tight end with a reception — one catch for 15 yards, which came when the Irish were without Mayer in Blacksburg.

Mayer’s season got off to a booming start, with 120 yards receiving in the opener against Florida State and a two-touchdown game against Toledo. That momentum was stalled with the hip injury, which Mayer said dated to fall camp but was “tweaked” during the Cincinnati game.

While dealing with the injury, Mayer said his strength when running routes and planting his foot was impaired. While initially optimistic that he could play at Virginia Tech on Oct. 9, Mayer said he and coach Brian Kelly discussed the dangers of coming back too soon, of possibly worsening the injury. He sat out.

“It’s risk/reward type thing,” Mayer said, “and I think I made the right decision.”

Notre Dame’s bye week gifted an extra few days of recovery time. On Tuesday, after appearing to be at full strength against USC, Mayer labeled himself as “probably very close to 100%.” The Irish can breathe a sigh of relief with Mayer in the lineup with five regular season games remaining, starting Saturday night at home against North Carolina (6:30 p.m., NBC-5).

A five-star recruit out of Covington (Ky.) Catholic High School near Cincinnati, Mayer has always operated under high expectations at Notre Dame. He won’t be draft-eligible until 2023, but he is already projected to be a first-round pick. Between now and then, he will likely continue to ascend through the Notre Dame record books, etching his name in with the likes of John Carlson, Ken MacAfee and Tyler Eifert.

Mayer is also likely to keep drawing attention as one of the best in college football; he was already named to the John Mackey Award Watch List, given annually to the best tight end in the country.

Mayer said he’s gotten better at blocking out the outside noise and matured into a veteran player who leads by example.

“I’m not the vocal leader,” Mayer said. “But one thing, I do see myself as a leader, where the actions that I do, people will follow me.”