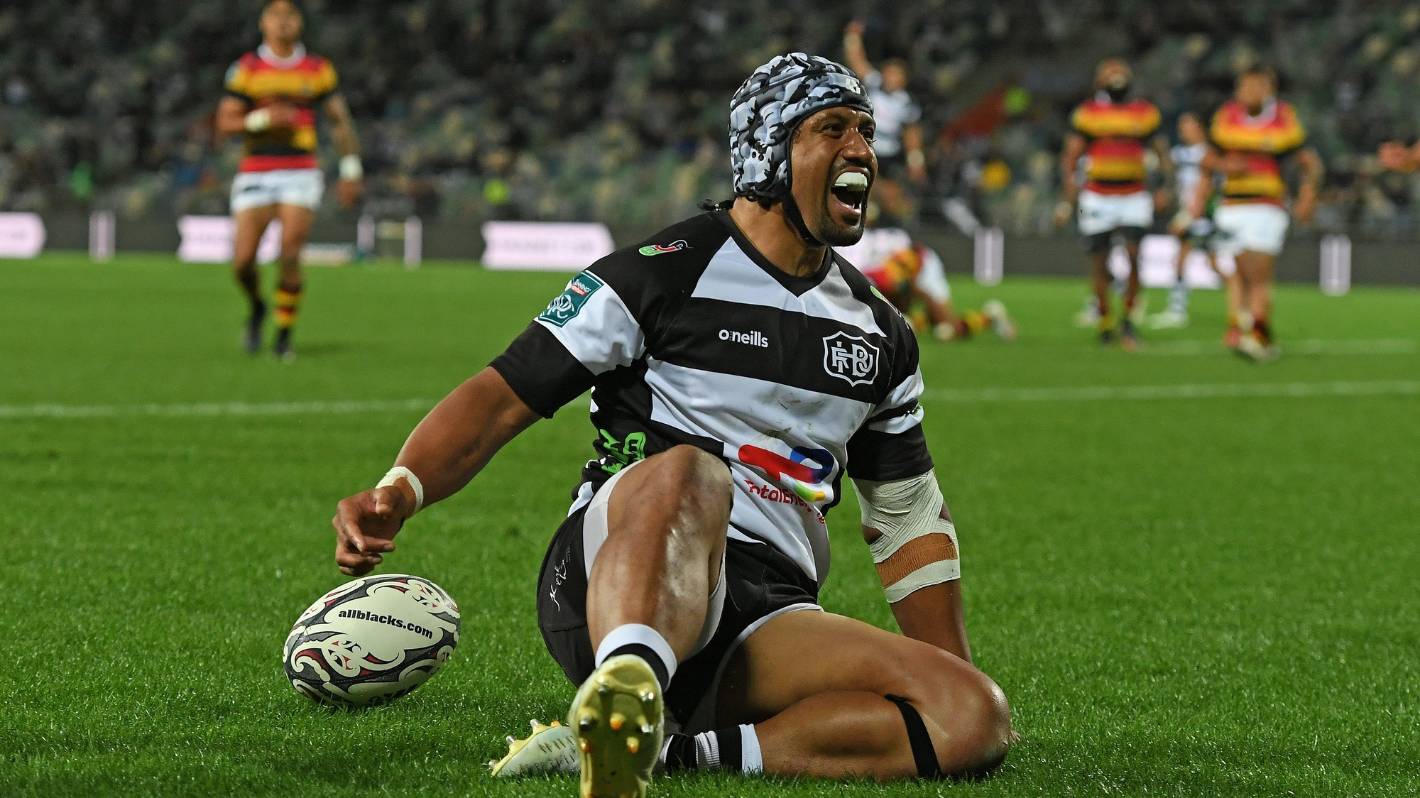 Hawke’s Bay have locked up the Ranfurly Shield for the summer after a stunning second half display against Waikato on Saturday night.

Behind 14-12 at halftime against a gallant, injury-hit Mooloos side, the Magpies kept the challengers scoreless in the second spell, storming to a 41-14 victory at Napier’s McLean Park.

In fact, Hawke’s Bay put on all four of their second-half tries in the final quarter, blowing out the score big-time in what was a highly physical encounter between the two NPC Premiership sides.

And with what was their ninth defence of the Log o’ Wood in this reign – the most by any side since their 12 during their 2014-15 tenure – not only did the Magpies extend their lead at the top of the table, but the bonus-point win also ensures a home semifinal for them in three-weeks’ time.

In contrast, it was a third straight defeat for Waikato, who over the past fortnight have had to relocate themselves to Tauranga due to Covid alert level restrictions, and who suffered a major blow pre-kickoff, when co-captain Fletcher Smith was a late withdrawal to the bench after an ankle injury.

The gallant visitors held on to their two-point advantage for some time, but ill-discipline most certainly caught up with them.

Lincoln McClutchie slotted a penalty on 54 minutes for the hosts to re-take the lead, before the floodgates really opened.

After turning down two more kickable penalties, the Magpies struck in the 62nd minute when, after their lineout drive was brought to ground and they had penalty advantage, McClutchie cross-kicked beautifully for Neria Fomai to brilliantly latch on and score.

Smith entered the fray on his ankle with quarter of an hour to play, but it was his big men who were getting troubled, with a couple of scrum penalties their undoing, and eventually seeing Tom Parsons go over, somewhat fortuitously after Ereatara Enari’s pass ricocheted off locking partner Geoff Cridge into his arms.

At 29-14 with 10 minutes to play, Waikato needed a miracle, and that thought was immediately put to bed when James Tucker was yellow carded from the restart for taking out Cridge in the air.

Two more brilliant Magpies tries followed, as fine bursts by Josh Kaifa, Pouri Rakete-Stones and MarinoMikaele-Tu’u put Ollie Sapsford over, then a brilliant run down the touchline from DannyTusitala had the impressive Lolagi Visinia in support and Fomai on hand for his double.

Earlier, no such runaway looked on the cards.

After both teams came together in the middle of the park to pay tribute to Sean Wainui, who died in a car crash on Monday, it took Hawke’s Bay all of two minutes to open the scoring, turning down a penalty shot and striking from the resulting lineout drive, with Jacob Devery just getting the ball down in the left corner.

Waikato weren’t deterred, having the better of things over the next 15 minutes, and while a huge Magpies scrum on their own line saved them once, they couldn’t do much about the Mooloos’ 16th minute lineout drive, as Steven Misa matched his opposite’s meat pie.

The visitors’ lead lasted less than five minutes, though, as Danny Toala burrowed over after Fomai was sent into a gaping hole. Fomai had not long returned to the field following an HIA test after smashing Xavier Roe straight from the kickoff, and while the Waikato No 9 ploughed on with his arm strapped up, he left gingerly straight after that try.

However, his replacement – Cortez Ratima – made a fine impact in tandem with last-minute No 10 promotion D’Angelo Leuila, and after a solid close-range scrum, it was the halfback who sent the competition’s top tryscorer – Liam Coombes-Fabling – flying in for the Mooloos’ second five-pointer, and the challengers’ halftime advantage.