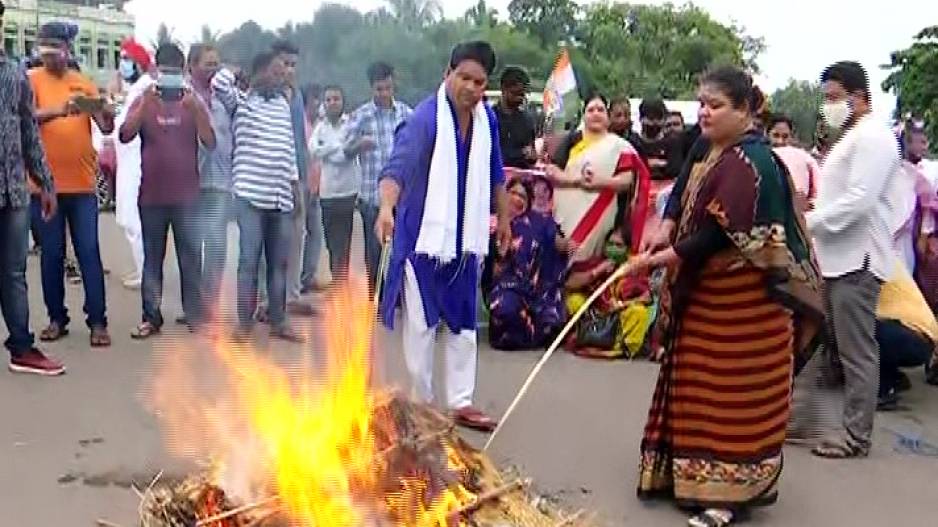 Trouble seems to be piling up for Odisha Minister of State (Home) Dibyashankar Mishra over his links with Gobinda Sahu, the prime suspect in the disappearance case of Mahaling Sunshine English Medium School lady teacher Mamita Meher. Gobinda was nabbed by the police today almost two days after he reportedly escaped during detention at the Titlagarh police barracks on Sunday.

The Opposition political parties in the State on Tuesday launched an all-out attack, on and off the street, against the ruling BJD, and minister Dibyashankar in particular, over his suspected involvement in the case.

Escalating their protests, several Congress activities today hurled eggs at the residence of the Minister in Bhubaneswar. Protests also erupted in Kalahandi, the home constituency of Dibyashankar where Congress workers staged dharna in front of the Bhawanipatna town police station and burnt posters of CM Naveen Patnaik.

Senior Congress leader Santosh Saluja levelled serious allegations when he said a sex racket is active at the Sunshine school and Mahaling Regional College under the tutelage of Minister Dibyashankar. Saluja alleged that flesh trade was carried out by entrapping girl students with the promise of good assessments.

“Minister Dibyashankar himself also used to spend nights in the college,” Saluja alleged in his statement to the media. The Kantabanji MLA has demanded CBI probe into the case and inclusion of the Minister under the ambit of investigation.

Similarly, Odisha BJP president, Samir Mohanty has also condemned the incident. Senior party leader Basant Panda has called upon the State government to bring all those involved in the disappearance case of the teacher and alleged sex trade at the institution to justice.

“Involvement of a Minister from Odisha in the case has been proved by the father of the missing lady teacher which is a matter of great shame for the State. On moral grounds, Dibyashankar should immediately resign from his post,” said Samir Mohanty.

However, the BJD has defended the allegations leveled by the Opposition. Senior party leader Debi Mishra said law will take its own course. “When the Minister (Dibyashankar) himself has clarified that the real culprits will be brought to the court of law, I don’t understand the need to politicise such a sensitive issue,” said Debi Mishra.

On the other hand, newer details on various scandals continue to come to the fore from Ramaling Regional College. As per reports, lakhs of rupees in funds used to be allocated to the college every year from the Western Odisha Development Council. Not only that, Gobinda Sahu, who was the president of the Sunshine School’s managing committee had bagged the contract for the construction of a stadium in Mahaling.

In 2013, the Superintendent of the college was arrested in connection with an exam question paper leak case. However, the college continued to get endorsements from none other than minister Dibyashankar.