People facing a death sentence from bowel cancer could soon be given new hope thanks to a breakthrough drug combination to be offered on the NHS.

Clinical trials found more than half of patients given the treatment, who had all failed to respond to standard chemotherapy and radiotherapy, were still alive five years later.

Professor John Bridgewater, consultant oncologist at University College Hospital in London, said many were now cancer-free, adding: ‘For the first time, this group of advanced cancer patients has some expectation of being cured.’

The drug combination has been approved for use in bowel cancer patients whose tumours have spread to other parts of the body and don’t respond to chemotherapy – roughly 800 people every year. 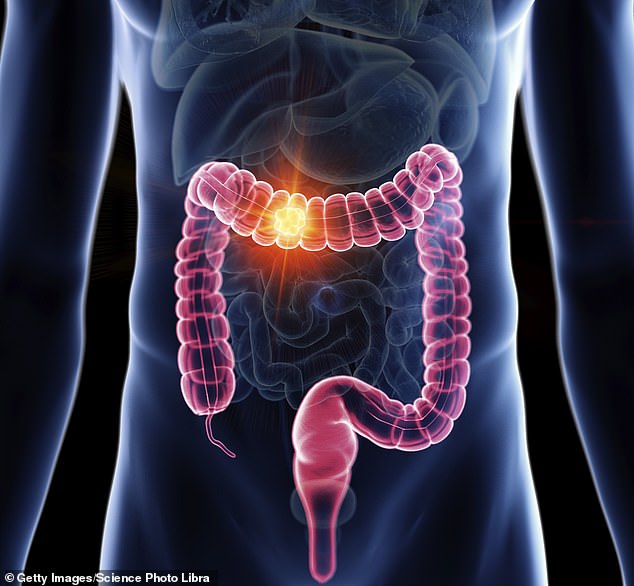 People facing a death sentence from bowel cancer could soon be given new hope thanks to a breakthrough drug combination to be offered on the NHS. Clinical trials found more than half of patients given the treatment, who had all failed to respond to standard chemotherapy and radiotherapy, were still alive five years later

Previously there was no option for these patients. Their tumours carry a rare genetic mutation called microsatellite instability high, or MSI-H, which causes it to spread at speed, making it impossible to control with chemotherapy.

Prof Bridgewater said: ‘Chemo isn’t enough to stop the spread of the cancer. For the majority of MSI-H patients, it is a death sentence.’

But in recent years specialists became increasingly hopeful that a combination of drugs held the key to battling the otherwise terminal disease.

Both drugs train the immune system to seek out and destroy cancer cells.

The high number of mutations in MSI-H tumours means they are uniquely receptive to immunotherapy, Prof Bridgewater said: ‘The mutations are so extreme, they stick out like a sore thumb to the immune system.

‘In patients suffering from conventional bowel cancer this treatment would be near useless, as the cancer, while more controllable with chemotherapy, is more effective at hiding from the immune system. But in MSI-H patients, the drugs give the body the necessary boost to find and fight the cancer.’ 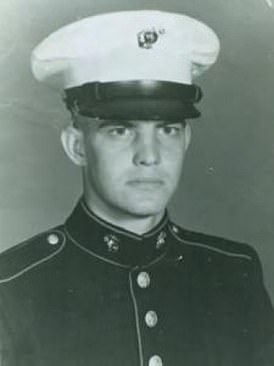 Charles Osborne (above), from Iowa, started  hiccupping in 1922 – and didn’t stop for seven decades

Struggle to get rid of hiccups? Count yourself lucky you’re not Charles Osborne, from Iowa, whose hiccups lasted 68 years.

In 1922, Osborne was weighing a pig for slaughter and fell over. When he stood up, he began hiccupping – and did not stop for nearly seven decades.

Hiccups are involuntary contractions of your diaphragm, usually caused by eating too quickly or drinking too much alcohol.

At its worst, Osborne hiccupped 40 times a minute. Sadly, doctors were never able to find a cure.

Patients attend hospital for the treatment and receive both drugs intravenously. They are given four doses of ipilimumab, once every three weeks.

Nivolumab is given monthly, and this is continued for two years or as long as the treatment remains effective.

Recommending the treatment for NHS use, spending watchdog the National Institute for Health and Care Excellence (NICE) noted it was far less debilitating than chemotherapy and also offered a better quality of life for patients.

What’s more, in a high proportion of patients, the cancer shrinks so small that it is no longer visible on a scan. In these cases, doctors say patients are cancer-free.

Prof Bridgewater said: ‘Patients are going from being told they may have just months to live to having over a 50 per cent chance of being alive or totally cured five years on.’

One patient to benefit is 39-year-old Tom Bartlett from Oxfordshire, who was diagnosed with stage four bowel cancer in July 2018.

Tom, who works in the food industry, went to his GP with stomach pains and after seeing blood in his faeces, and was referred for urgent tests.

‘The [colonoscopy] camera turned a corner and I saw the scariest thing I’ve ever seen,’ said Tom.

‘The tumour filled the entire bowel cavity. I just stared at it, completely terrified. It had burst through the bowel wall and spread to the lymph nodes.’

Tom was given chemotherapy which, initially, reduced the size of his tumour. But nine months later scans showed it had grown even larger and moved further outside the bowel.

Tom was then given nivolumab and ipilimumab, and scans later showed the tumour had completely disappeared.

Tom said: ‘I had virtually no side effects, especially compared with chemotherapy which can be very unpleasant. I feel incredibly lucky.

‘I now live a pretty normal life, playing cricket and golf, and just have to go for regular check-ups at the hospital.’

It’s possible to become so hot that you stop sweating.

If body temperature rises above 40C, heatstroke can occur – where vital organs are unable to function.

Perhaps confusingly, the first sign of heatstroke can be a lack of sweat since the body prioritises keeping water around vital organs to protect them.

If a person is extremely hot, and not sweating, it is vital that they swiftly seek medical attention. 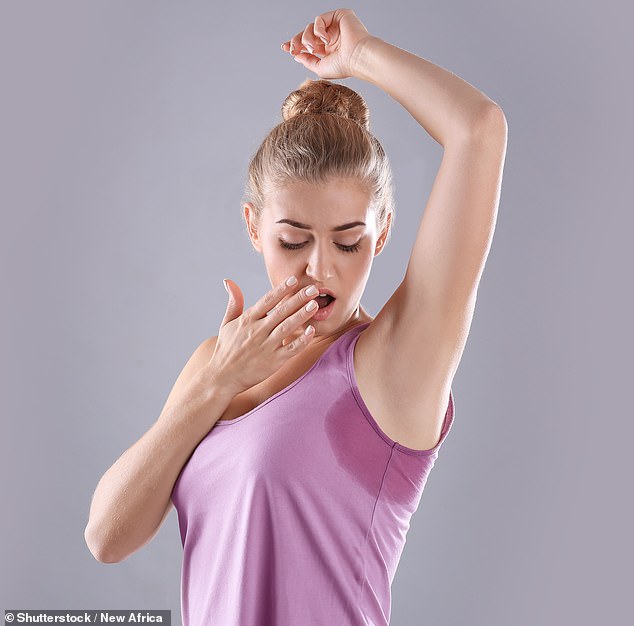 Sweating helps to regulate body temperature, typically keeping it somewhere between 37C and 38C. If body temperature rises above 40C, heatstroke can occur – where vital organs are unable to function. (File image)