When pediatricians and other pediatric providers are given training and resource materials, levels of firearm screenings and anticipatory guidance about firearm safety increase significantly, according to two new studies presented at the annual meeting of the American Academy of Pediatrics.

“With the rise in firearm sales and injuries during the COVID-19 pandemic, it is more important than ever that pediatricians address the firearm epidemic,” said Alexandra Byrne, MD, a pediatric resident at the University of Florida in Gainesville, who presented one of the studies.

In addition to the link between firearms in the home and domestic violence, they are also linked to a three- to fourfold greater risk for teen suicide, and both depression and suicidal thoughts have risen in teens during the pandemic.

“The data are pretty clear that if you have an unlocked, loaded weapon in your home, and you have a kid who’s depressed or anxious or dysregulated or doing maladaptive things for the pandemic, they’re much more likely to inadvertently take their own or someone else’s life by grabbing [a gun],” said Cora Breuner, MD, MPH, professor of pediatrics at Seattle Children’s Hospital.

However, there is no difference in gun ownership or gun-safety measures between homes with and without at-risk children, previous research shows.

Previous research has also shown that there has been a reluctance by pediatricians to conduct firearm screenings and counsel parents about gun safety in the home.

For their two-step program, Dr. Byrne’s team used a plan-do-study-act approach. They started by providing training on firearm safety, evidence-based recommendations for firearm screening, and anticipatory guidance regarding safe firearm storage to members of the general pediatrics division at the University of Florida. And they supplied clinics with free firearm locks.

Next they supplied clinics with posters and educational cards from the Be SMART campaign, an initiative of the Everytown for Gun Safety Support Fund, which provides materials for anyone, including physicians, to use.

The program nearly doubled screenings during well-child visits and dramatically increased the proportion of families who received a firearm lock when they told providers they had a firearm at home. 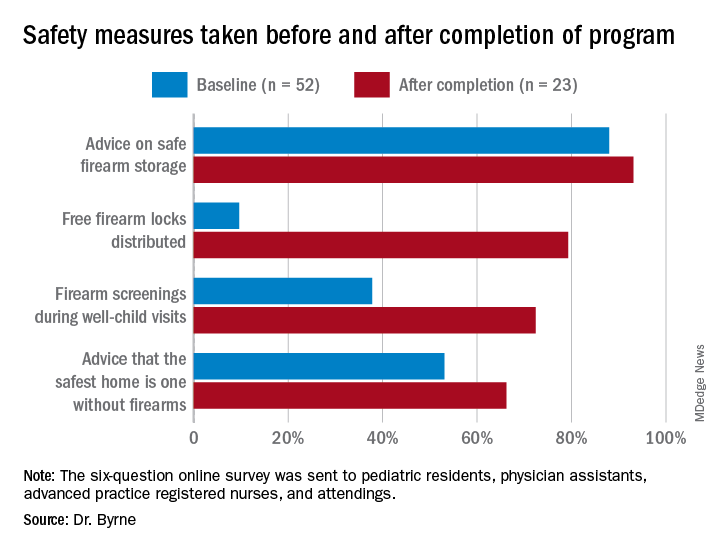 Previous research has shown “a significant increase in safe firearm storage when firearm locks were provided to families in clinic compared to verbal counseling alone,” Dr. Byrne said. “We know that safe firearm storage reduces injuries. Roughly one in three children in the United States lives in a home with a firearm. Individuals with a firearm are at two times the risk of homicide and three to four times the risk of suicide, so it is essential we further study how pediatricians can be most effective when it comes to firearm counseling.”

The difference in lock distribution as a result of the program is a “tremendous increase,” said Christopher S. Greeley, MD, MS, chief of the division of public health pediatrics at Texas Children’s Hospital and professor of pediatrics at Baylor College of Medicine in Houston, who was not involved in the research.

“Locks could go a long way to minimizing the risk,” he said in an interview, adding that nearly half of all teen suicide deaths that occurred over a decade in Houston involved a firearm.