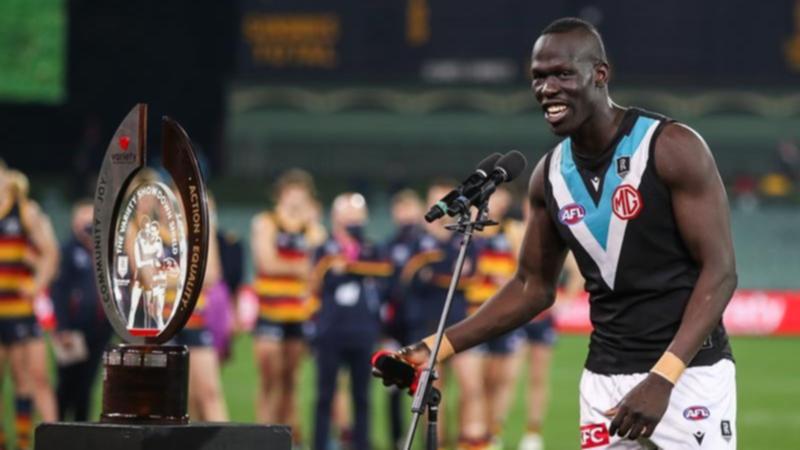 AFL club Port Adelaide is continuing to offer support to Aliir Aliir after the Kenyan-born defender was racially abused on social media.

Aliir’s best-afield performance in Port’s four-point win over Adelaide on Saturday night was soured when he was likened to a monkey by an anonymous account user on social media.

“We will get around and support Aliir,” Power assistant coach Nathan Bassett told reporters on Monday.

“At different stages, lots of people make foolish decisions to make comments and they make idiots of themselves.

“Some do it because they are idiots.

“Others do it because we give them the air time and they get recognised as making a headline.

“It is extremely disappointing.”

The Power on Sunday condemned the social media post, which came just days after Crows forward Taylor Walker was suspended for six matches and given a $20,000 fine for his racist comment about North Adelaide player Robbie Young at a SANFL game.

Bassett described Allir, who joined the South Australian club from Sydney this season, as much loved.

“Aliir is a fantastic footballer, he has been a terrific person for our footy club,” Bassett said.

“We love him. We will keep supporting him.”

Aliir was superb in Saturday night’s game, taking 10 marks and collecting 20 disposals in a display which earned him the best-afield medal awarded in clashes of the SA clubs.

And the Power’s playing stocks will be boosted this week by the availability of goalsneak Steven Motlop, who has been sidelined since round 17 by an ankle injury.

“Most of the players are back … now it is about getting the form that gives them the best chance to play well when it comes to finals,” Bassett said.

“We have a great opportunity to cement a place in the top four.”

Port play 13th-placed Carlton this weekend before a finals-shaping encounter with ladder-leaders Western Bulldogs in the last game before finals.