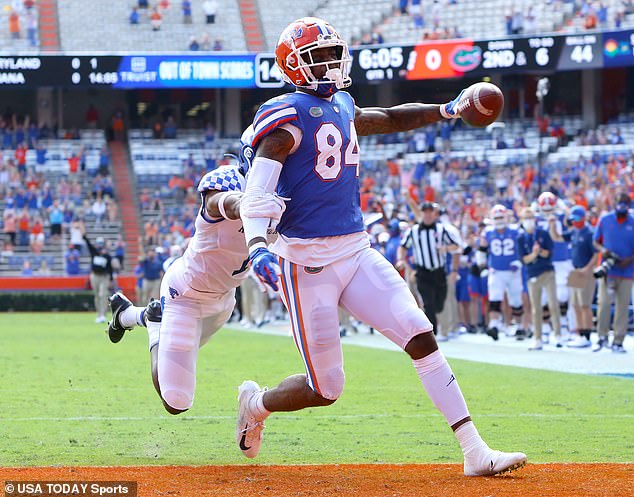 Playing football during the pandemic is safe and transmission of COVID-19 on the field is minimal, if it even happens at all, a new study suggests.

Researchers at Texas A&M University, Louisiana State University (LSU) and the University of Florida – all members of college football’s Southeastern Conference (SEC) – gathered data from 64 games within the conference in 2020.

They found that players were rarely in close contact with each other often enough to spread the virus, and no cases of on-field transmission were recorded.

In total, 138 players in the conference contracted Covid last year, and 18 did so within 48 hours of a game, but none of those cases could be tied to the game itself.

Researchers found that 138 of 1,190 SEC football players tested positive for COVID-19 last season, though none of the cases were contracted on the field. Pictured: Florida Gators tight end Kyle Pitts scores a touchdown in a November 2020 game against the Kentucky Wildcats in Gainesville, Florida 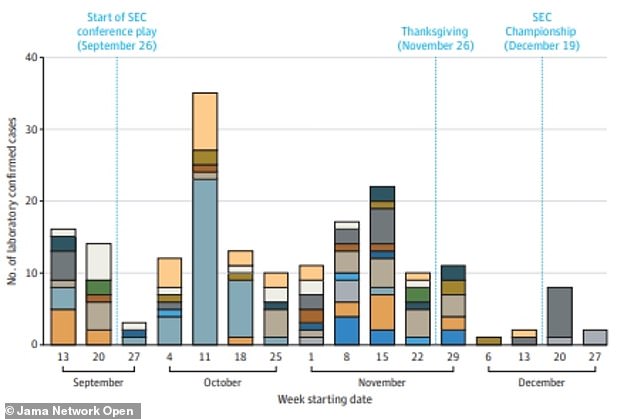 The Florida Gators were the only team to suffer a massive Covid outbreak last year, with more than 20 players testing positive for the virus in one week in mid-October. Researchers point to regular testing and contact tracing as reason for the success of last year’s football season

Last year, the SEC was among the first major college football conferences to start its season, a controversial decision that many feared would put the athletes at risk.

Due the pandemic, the 2020 college football schedule was adjusted.

All out-of-conference games for SEC teams were canceled, and each of the conference’s 14 teams played a ten-game schedule against other SEC teams.

In total, 64 games were played and some had to be canceled due to Covid protocols.

All were tested at least three times a week and their interactions with other players were logged through tracking devices they wore on their wrists.

The devices would allow team staff to identify close contacts in case a player tested positive for the virus.

If a player tested positive for Covid within 48 hours following a game, then players they came into close contact with during the game would be considered exposed to the virus.

Opposing players rarely spent enough time next to each other on the field to be able to transmit the virus, though. 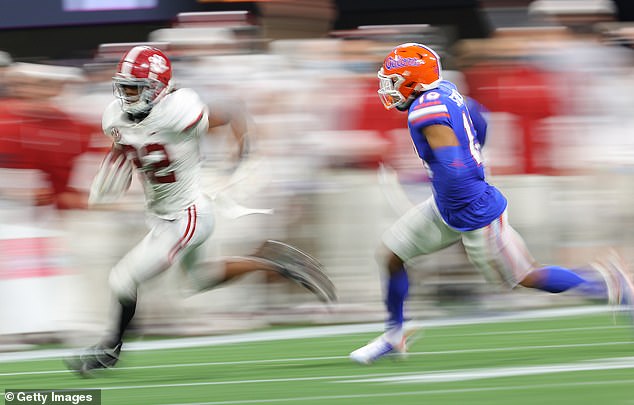 While some games needed to be rescheduled or cancelled, the SEC and college football season came to a full conclusion last year. Pictured: Alabama Crimson Tide running back Najee Harris runs past a Florida Gators defender during the 2020 SEC Championship game on December 19 in Atlanta, Georgia

Researchers, who published their findings Friday in JAMA Network Open, found that the average on-field interaction between two players was only six seconds, and 95 percent of interactions were under 26 seconds.

Only 13 times across the entire season did two opposing players accumulate more than 15 minutes of time near each other – the threshold used to determine who is a close contact.

None of the players in any of the 13 instances ended up testing positive for the virus in the 14 days before or after the game.

Only 18 players tested positive for the virus within 48 hours of playing a game, and none had an on-field interaction long enough to be considered a close contact.

Additionally, no players they interacted with on the field tested positive for the virus within the next 14 days.

Researchers believe the regular testing and contact tracing of players were the keys to how successful the conference was at preventing COVID-19 spread.

‘If the extensive mitigation policies were not used, the study results may have been different,’ researchers wrote.

‘The testing protocol helped to reduce the number of student athletes with COVID-19 infection who reached the playing field, hence the opportunity of transmission between opposing teams was substantially decreased.’ 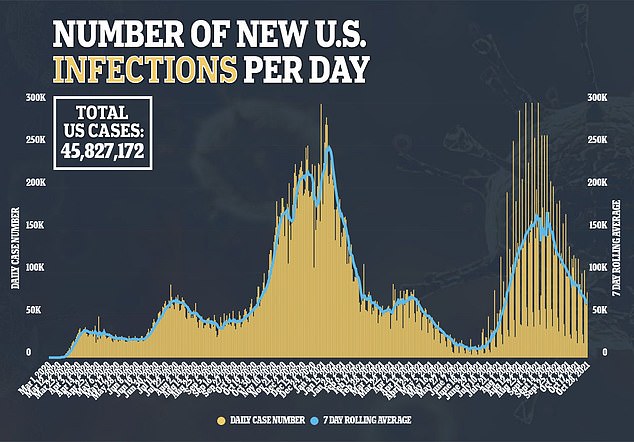 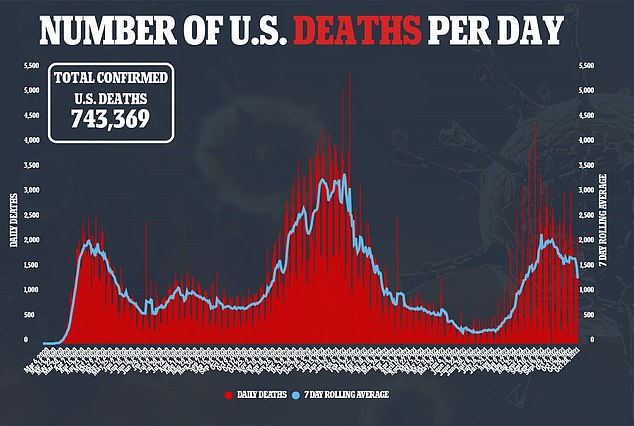 Throughout the season, only one team, the Florida Gators, had a major Covid outbreak, with more than 20 players testing positive for COVID-19 in mid-October, leading to the postponing of a game against the LSU Tigers.

The research team found that the week of October 11 was the only week of the SEC season when more than 30 players tested positive for the virus – with more than 20 of those cases coming from one team.

While they did not disclose the name of the program responsible for the cases, it corresponds with the outbreak at Florida that caused a game to be postponed.

The decision to go through with the 2020 college football season was not made without fierce opposition.

Many feared that players going to practice and games would unnecessarily expose them to Covid.

While young and fit men like college football players face little risk of hospitalization and death from the virus, some side-effects, such as myocarditis, could be potentially life-altering for a player who planned to play professionally after college.

The season was delayed – because the usual late-August start date was pushed to late-September – and many marquee games throughout the year were cancelled.

Like the SEC, many conferences elected to only play intraleague games in order to limit travel and Covid spread.

Some teams, such as the University of Connecticut, elected not to take part in the college football season at all due to Covid concerns.

Many high profile players, such as Penn State’s Micah Parsons and Oregon’s Penei Sewell, chose to sit out the season entirely, fearing the virus. 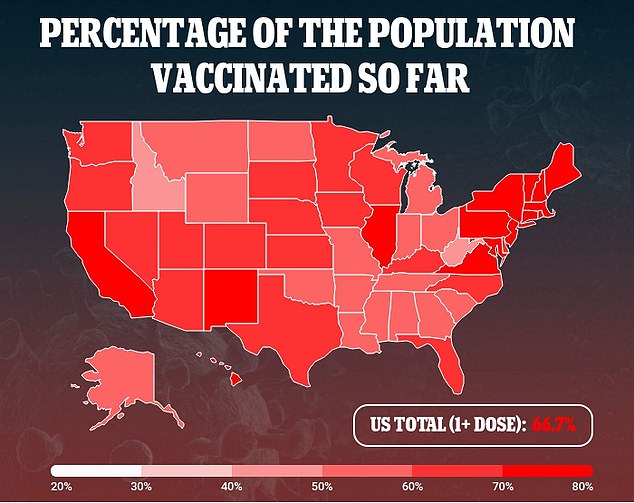 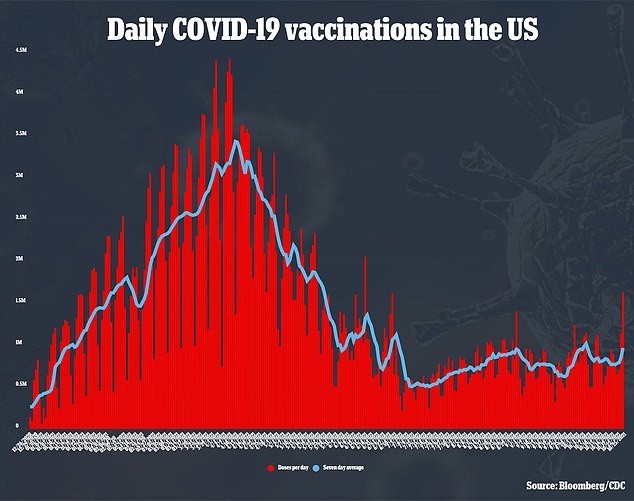 Dozens of games across the country ended up being cancelled or postponed, but the season eventually did come to a full conclusion.

The SEC ended up playing its championship game on December 19, two weeks after the usually scheduled date, and the national championship occurred on schedule on January 11.

Researchers believe that the success of college football at preventing on-field transmission means that other sports, recreational or professional, can likely take place without a hitch.

‘Other close-contact activities, such as amateur and recreational sports, especially if played outdoors, can continue safely during the COVID-19 pandemic,’ they wrote.