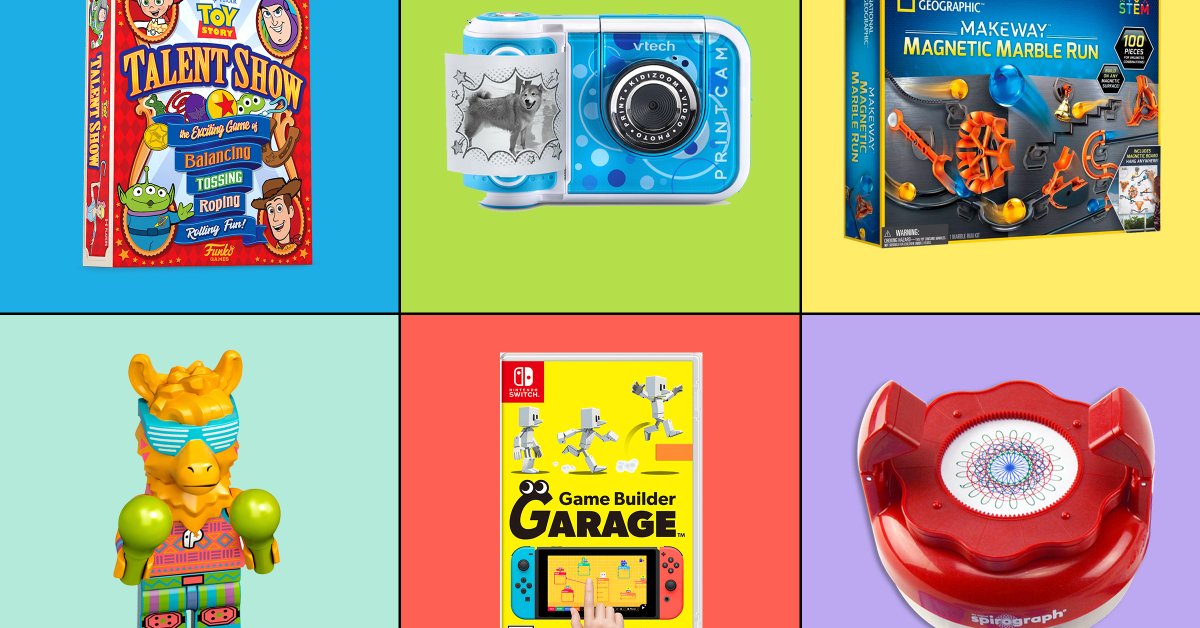 The best toys of 2021 keep the magic of childhood alive with technology, special effects, and good old-fashioned fun. With Magic Mixies, kids mix up a potion and—poof!—summon a new stuffed pet. LEGO Vidiyo Party lets kids create a music video in real time, wherever they are, through the power of virtual reality. And the Spirograph Animator reinvents a beloved classic toy, using a light show to add animated effects to your child’s spiral designs. Here, the editors of TIME for Kids round up the best toys of the year.

The Magic Mixies Magic Cauldron, from Moose Toys, includes a spell book and everything kids need to create a magic potion. After they add the ingredients to the cauldron, the mixture foams and bubbles. Kids then wave a magic wand, say the magic words, and—poof!—a mist rises from the cauldron. When it clears, an adorable creature called a Mixie is revealed. The Got2Glow Fairy Finder, by WowWee, sends kids on a search for more than 30 virtual fairies that are hiding in plain sight. They could be anywhere: in a bedroom, the garden, or the kitchen. Once kids have gathered the fairies and placed them safely in the electronic jar, they can “bond” with the magical creatures by feeding and hugging them. (Magic Mixies Magic Cauldron, ages 5+; Got2Glow Fairy Finder, ages 5+)

This is no ordinary camera. Sure, it takes photos. But the VTech KidiZoom PrintCam also lets kids add special effects, borders and digital stickers to their snaps. When your selfie or portrait looks just right, hit the print button and a black-and-white version instantly ejects from the front of the camera. Use it to create comic strips and to turn your photos into coloring pages. There’s also a video-record function and fun games built in. The camera comes with enough paper to print 80 pictures. Refill packs are available.

Put your family’s scientific minds to work with one of these Rube Goldberg–style contraptions. The Marble Rush Ultimate Set, by VTech, sends marbles careening along tracks and ramps, around a lighted cone, and out of a cannon. Color-coded parts make the paths easy to assemble in multiple configurations. For even more-high flying fun, try the National Geographic Makeway Magnetic Marble Run. Magnetic pieces let you build marble runs on vertical surfaces, like whiteboards and refrigerators. The set comes with a learning guide that explores scientific concepts such as energy, gravity and Newton’s laws of motion. (VTech Marble Rush Ultimate Set, ages 4+; National Geographic 100-piece Makeway Magnetic Marble Run, ages 8+)

Get creative with the Artie Max robot, from Educational Insights. This toy lets kids create art while they learn to code. Artie Max helps children learn five basic coding languages: Blockly, Snap!, JavaScript, Python, and C++. Kids then write code to tell Artie what to draw. The robot translates the code onto paper, using sensors and line recognition to create designs. Artie comes with three interchangeable markers and can be charged with a USB cable. (Artie Max, ages 8+)

Quick! What’s an item you find at a grocery store? Good! Now name another. Hurry! When playing GibGab, from Fat Brain Toys, thinking and speaking faster than your opponent is key. Face an opponent across the electronic game board. Choose a category from one of the cards. Press a button, and you’re in a head-to-head battle. GibGab is a great choice for a two-player game, or gather a gaggle of friends for tournament-style play. The Disney Pixar Toy Story Talent Show, from Funko Games, brings beloved characters from the movie franchise to family game night. In this super-active game, players are invited to show off their skills in a series of themed challenges. Complete the challenges to win coveted prize tickets, and collect the highest number of prize-ticket points to win. (GibGab, ages 8+; Disney Pixar Toy Story Talent Show, ages 6+)

Looking for a calming, screen-free activity for the kids? These tactile toys will focus attention and soothe the senses. With Mindful Maze boards from Hand2mind, little ones can use their fingers to move through various patterns—including waves, rainbows, and stars—as they pace their breathing to each task. Dimpl Pops, by Fat Brain Toys, offer a different sensory satisfaction. The irresistible pop of colorful silicone bubbles makes exercising fine motor skills as fun as it is relaxing. (Mindful Maze, ages Pre-K to 8; Dimpl Pops, ages 3+)

These two toys transform screen time with virtual- and augmented-reality technology. With Bill Nye as their guide, kids are transported to outer space to explore black holes, the cosmos, and more than 125 other immersive experiences, using Bill Nye’s VR Space Lab, from Abacus Brands. The kit comes with VR goggles and a 96-page activity book that they bring to life. There’s also an 85-piece set of materials that kids can use to build a planetarium and do 30 hands-on experiments. With the Lego Vidiyo app, kids can create their own music videos. Just download the app, scan your Lego figurine, and create a music video that will take place in augmented reality, wherever you are. The Party Llama BeatBox set comes with a scanning stage, a Party Llama figurine, and 16 BeatBits. Each BeatBit is used to create a different video effect in the app. (Bill Nye’s VR Space Lab, ages 8+; Lego Party Llama BeatBox, ages 7+)

Candy Claw Machine, from Thames & Kosmos, puts an educational spin on the classic arcade game. This do-it-yourself kit lets kids build and engineer their own claw machine, using gears, cranks, belts, and levers. Then they can add their favorite treats—a supply of lollipops and decoy candy boxes is included—and practice reaching for prizes. The set also comes with three interchangeable claw types that kids can use to scoop and score.

These classic toys, both from PlayMonster, are revamped for a new generation. With the Koosh Sharp Shot game, soft and squishy Koosh balls—they were all the rage in the late ’80s and ’90s—are used in a slingshot game that tests a player’s aim. The Spirograph Animator is a modern twist on the original Spirograph, which was introduced in 1965 and allows kids to create elaborate geometric drawings. The Spirograph Animator takes the fun a step further: Once kids have created their designs, they set them on the animator, which spins the drawings and starts a light show, creating an animated effect. (Koosh Sharp Shot, ages 6+; Spirograph Animator, ages 8+)

Bring It to Life

These kits let young gamers go behind the scenes to learn about video-game design and development. Nintendo’s Game Builder Garage, which can be played on Nintendo Switch systems, provides interactive lessons in programming and design. It guides kids as they build seven games, from a thrilling car race to a challenging maze. Once they’ve learned the basics, kids can create almost any game they can dream up. BitOGenius Inc.’s Pixicade Mobile Game Maker is perfect for art lovers. It comes with paper and five washable markers that kids can use to draw their own game. After they use the Pixicade app to snap a photo of their work, it’s transformed into an animated game that can be played on a smartphone or tablet. (Game Builder Garage, ages 8+; Pixicade Mobile Game Maker, ages 6)

Keep little hands busy with Cubles. The toys, made from 100% recyclable paperboard, are part puzzle and part origami. To create a Cuble, kids pop out shapes from paperboard and follow color-coded instructional tabs. Pieces fit together to make a three-dimensional toy. Cubles become a variety of creatures, including dinosaurs, dragons, and unicorns. They also turn into characters from beloved children’s book series, such as Little House on the Prairie and Dog Man. Cubles are small and don’t require scissors or glue, so they’re especially helpful for keeping kids occupied during holiday road trips. (Cubles, ages 6+)