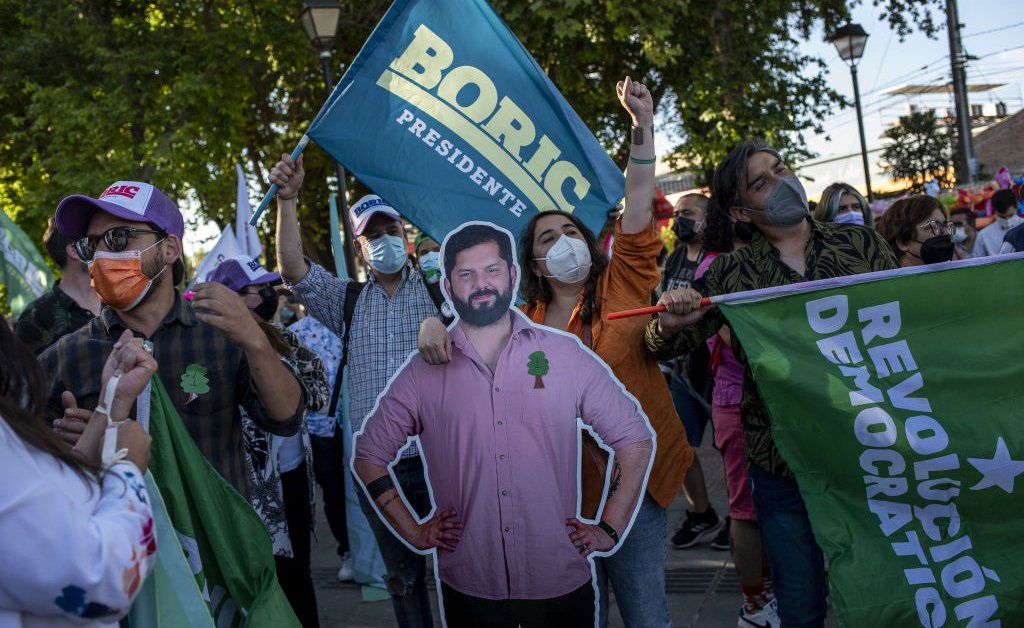 Ten years ago, Gabriel Boric was a 25 year-old student protester, with shaggy hair and a beard, leading tens of thousands of young people through the streets of Santiago. As head of a major student union, he shook Chile’s establishment by leading rallies that brought reforms to Chile’s privatized education system. Today, aged 35—and with slightly tidier hair—Boric is within striking distance of Chile’s presidency.

Chile’s Nov. 21 election, where Boric is one of two frontrunners, is the most high-stakes moment yet in a tumultuous two year national debate over the market-centered economic model established by military dictator Augusto Pinochet in the 1980s. With deregulated business and privatized public services and natural resources, the system helped make Chile a haven for foreign investors and one of the richest countries in South America.
[time-brightcove not-tgx=”true”]

But it has also generated the highest rate of inequality in the OECD group of developed nations and untenable living costs for poorer Chileans, with six in ten households earning too little to cover monthly expenses, according to the National Statistics Institute. Starting in October 2019, hundreds of thousands of people participated in months of anti-government protests—a so-called “social explosion”—which culminated in a national vote in 2020 to rewrite the Pinochet-era constitution.

If elected, Boric, who has spent the past seven years as a congressman arguing for the ideals expressed in the social explosion, promises to kill off the old model for good. A Boric-led leftwing coalition would hike taxes on major industries, ramp up public spending to overhaul services, and scrap the private pension system that has underpinned Chile’s capital markets. “If Chile was the cradle of neoliberalism, it will also be its grave,” he told a rally in July after winning the primary for leftist bloc Approve Dignity.

For Boric’s supporters it’s a long-awaited chance to transform a country that has never worked for a majority of its citizens. For his critics, it’s a radical overreaction that will destroy the foundation of Chile’s wealth and stability.

To deliver his vision, though, Boric would have to defeat another insurgent, José Antonio Kast, 51. A far-right former congressman with ties to the Pinochet regime, Kast has surged in the polls over the past six months. His hardline conservative stances on police brutality, indigenous rights and immigration have earned him comparisons to Brazil’s Jair Bolsonaro.

Recent polls put Kast on 26.5% of the vote, only marginally ahead of Boric’s 25%. Though pollsters warn that the recent social upheaval has made it exceedingly difficult to predict voter behavior, the candidates of the center-right ruling party and traditional center-left appear to be languishing in a distant fourth and third place.

The most likely outcome is that Boric and Kast pass to a second round vote in late December, presenting Chile with its starkest choice in decades, says Kenneth Bunker, a political analyst for Chilean media. “These candidates are much more extreme than what we’re used to and that’s opening up topics that we thought were closed in Chile,” he says. “If they pass to the second round, it’s going to be an absolute earthquake for the political system”

Who is Gabriel Boric?

Boric grew up in Magallanes, the southernmost region of Chile. He started in student activism in high school and in 2011, while studying law at the University of Chile, he was elected leader of its student union. That year, college students began a massive organized protest against low public funding and inequity in Chile’s education system, which Boric argued “treats our rights like consumer goods.” Marches and university occupations forced the government into negotiations that eventually yielded sweeping educational reforms.

In 2013, Boric was elected to congress for Magallanes as an independent. He has since cycled through membership of several “new left” parties—most recently Social Convergence—set up to challenge Chile’s longstanding center-left and far left blocs. Boric argues that the centrists, who have had previous stints in power, were not ambitious enough to tackle the country’s deep rooted inequality. Parts of the far-left, meanwhile, have unnerved voters by expressing support for authoritarian leftist regimes in Venezuela and Nicaragua.

Boric has embraced positions, such as making currently privately-held water rights a public or common resource, which previous leftist governments in Chile have shied away from. But he cuts a relatively moderate figure, often stressing the importance of dialogue with opponents and becoming one of the most vocal supporters of a November 2019 pact between political parties to end the violence in the streets. Boric’s campaign has focused on grassroots political participation, holding town halls to discuss policy before producing a manifesto of 13,000 proposals,

Bunker says younger Chileans appreciate Boric’s “brutal honesty”: he has for several years spoken openly about suffering from obsessive compulsive disorder and spending time in a psychiatric hospital, breaking a taboo around mental health in Chile. “He represents a younger, more modern, progressive voter, which makes people feel that he’s in synchronicity with the times,” Bunker says.

Chile at a crossroads

Kast offers a very different social and cultural vision for Chile, one aligned with the deeply conservative forces that have ruled in the past. Kast spent most of his political career in a rightwing party founded in the 1980’s that strongly supported the Pinochet regime, despite its murder and torture of tens of thousands of civilians. When Kast first ran for president in 2017—then achieving only marginal support—he claimed that if the dictator were still alive, “he would vote for me.”

Kast has promised to restore order to the streets after the protests, which he dubbed an “anti-social explosion” and recent conflicts with indigenous activists. His manifesto offers “unconditional support” for the carabineros, the police force that watchdogs have accused of human rights abuses (Boric wants to reform and “relaunch” the carabineros).

A staunch Catholic, Kast also wants to push to repeal a 2017 law that made abortion legal under a limited set of circumstances, and on the campaign trail, he has suggested the country dig a three meter-deep ditch along its northern border to keep out migrants and refugees from Venezuela.

But some of the campaign’s most intense debates have centered around the economic model. Kast’s brother, Michael, was a minister in the Pinochet regime and one of the so-called Chicago Boys—a group of economists who helped design Chile’s free market formula after studying at the University of Chicago under economist Milton Friedman. Kast has pledged to defend, “resolutely and rigidly” the model, cutting taxes, regulations and public spending, in order to restore economic growth after three years of recession caused by the unrest and COVID-19. Higher public spending during the pandemic has pushed the deficit to 11.5% of GDP this year, slightly lower than the current U.S. deficit of 12.4%.

Boric, meanwhile, wants a transformation. He advocates the cancellation of student debts, an increase in the minimum wage, expansion of public health care and the introduction of new taxes on the wealthy and on the mining companies that have made fortunes out of Chile’s vast copper resources.

Boric’s most controversial proposal, though, is a plan to replace Chile’s private pension system with a state one. Introduced by Pinochet in 1981, the private scheme obliges Chileans to pay 10% of their income into a pension fund managed by a company, freeing up individual savings for investment in local capital markets.

Multilateral organizations like the World Bank have held up the system as an example for emerging economies struggling to afford public pensions. But many Chileans say it has provided only paltry payouts for retirees and six in 10 want it replaced with a public system.

The pension debate in Chile, which helped fuel the 2019 protests, is now the focal point of concern for business leaders and foreign investors about the future direction of the country as a whole. Since the start of the COVID-19 pandemic, congress has voted three times to allow Chileans to take out 10% of their pension to help cope with job losses, which economists say could have a severe long term impact on future retirees.

Boric’s vote in favour of those withdrawals have led some foreign investors to fear a potential populist slant in his economic policy. “The question is whether [increased public spending] will be done in a responsible way,” Alberto Ramos, a Goldman Sachs analyst told the Financial Times. “They are slowly deviating from the macro model that made Chile the poster child of fiscal responsibility.”

Boric’s critics also say the presence of the Communist Party in his electoral bloc, members of which will likely hold a significant minority of seats in a Boric-led coalition, would allow more radical voices into government, with a potential destabilizing effect for one of the most stable countries in Latin America.

But a Kast victory may be even more destabilizing for Chile, argues Claudia Heiss, head of political science at the University of Chile’s Institute of Public Affairs. Kast is hostile to the project that Chile undertook after the 2019 protests to rewrite its constitution. He says that if he doesn’t like the new draft, due to be delivered by an elected assembly next year ahead of a referendum, he would campaign for it to be rejected.

“The political system has already started taking a change in direction with the constitutional process and Kast is in conflict with that process,” Heiss says. “I think a Boric government can help do the reforms people have asked for, and make the institutional, political route viable. Without that route, we might go back to the large shocks that we saw in the social explosion.”