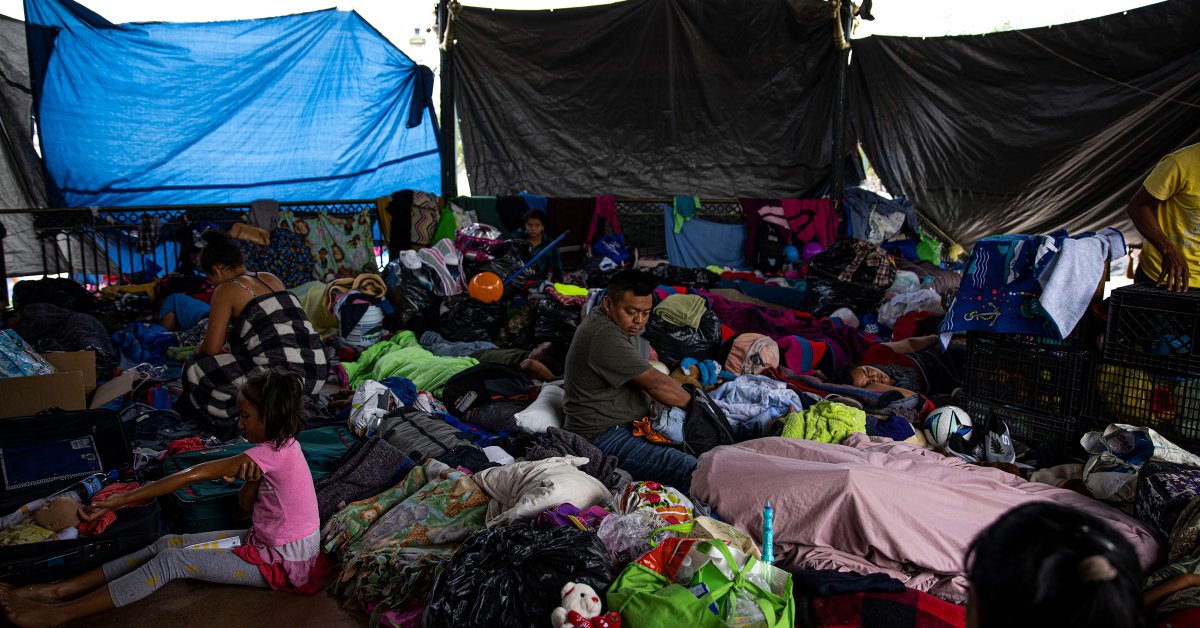 Jose Mirabal first tried to come from Honduras to the U.S. 15 years ago, but didn’t make it. Like many before and since he boarded La Bestia or “The Beast”—an infamously dangerous network of cargo trains that wends north across Mexico. In 2006, Mirabal fell from the train and had to have his foot amputated. He returned to Honduras with a prosthetic.

But 2020 was a hard year. COVID-19 strained businesses and health care systems in Honduras, and in November two hurricanes struck the country, leaving thousands of people homeless. So in 2021, Mirabel decided to try his chances again—once again traveling to Mexico and boarding La Bestia. He’s 40 now, and the journey is harder on his body. He doesn’t dare take off his prosthetic because he doesn’t want to risk it getting stolen, he says, and if he needed to run away quickly, he wouldn’t have time to put it back on.

“Not all of us run with the same luck,” Mirabal says, speaking in Spanish from Coatzacoalcos, a city in Mexican state of Veracruz. He’s traveling with his cousin. “Some of us run with good luck, and others unfortunately run with the bad luck. My cousin and I, thank God, have been moving day and night…and so far nothing bad has happened to us.”

Freelance photographer Yael Martínez documented Mirabal and several other migrants’ journeys from Honduras, through Mexico to the U.S.-Mexico border this year. He photographed them crossing the Mexican state of Veracruz and ending in Reynosa and Matamoros, Mexican cities across the border from McAllen and Brownsville, Texas, respectively.

Jose Mirabal, a migrant from Honduras, rests in Coatzacoalcos in the Mexican state of Veracruz on March 23, 2021. He has been traveling for 15 days. This is his second attempt to reach the United States. During his first attempt 15 years ago, he lost his foot after falling from the train known as La Bestia or “The Beast” which many migrants cling to to journey north.

People, like Mirabel, from Central America and Mexico have been attempting to come to the U.S. for decades, but this year marks an inflection point. U.S. Customs and Border Protection (CBP) conducted more than 1.7 million enforcement actions at the U.S.-Mexico border during Fiscal Year 2021, which ended on Sept. 30, according to CBP data. These enforcement actions include arrests and expulsions under Title 42, a Trump-era health measure that the Biden Administration has kept in place and has used to immediately remove individuals because of the risks posed by COVID-19 without granting them access to the asylum system.

Title 42 expulsions accounted for more than one million of the 1.7 million enforcement actions during FY2021, meaning most of the migrants who have arrived at the U.S.-Mexico border have been immediately denied entry to the U.S. FY2021 also set the record for most border enforcement encounters by U.S. Border Patrol Agents, according to CBP data. Border Patrol conducted nearly 1.66 million enforcement actions in FY21, surpassing the previous record high of nearly 1.62 million in 1986.

The U.S. saw an uptick in migration from Central America beginning in the 1980s brought on by regional civil wars (which the U.S. had involvement in), economic instability and displacement, according to the Migration Policy Institute (MPI), a nonpartisan research institution. That migration flow never ended, particularly from the Northern Triangle countries, El Salvador, Guatemala and Honduras. From 2007 to 2017, the number of unauthorized migrants from Central America began increasing from previous levels seen in the ’80s, according to the Pew Research Center, while the number of unauthorized migrants from Mexico declined. By Fiscal Year 2014, the number of Central American migrants surpassed those from Mexico for the first time in history.

Still, migration to the U.S.-Mexico border is constantly evolving. In recent years, more Central American migrants have sought out humanitarian protection in the U.S. and are not attempting to evade detection by border enforcement officials, according to MPI.

Read more: More Migrants Die Crossing the Border in South Texas Than Anywhere Else in the U.S. This Documentary Depicts the Human Toll

Since 2019, these policies have led to overcrowded shelters in dangerous Mexican border cities and towns, and many thousands of migrants have lived in makeshift tent encampments in Tijuana, Reynosa and Matamoros.

“There are millions of us migrants,” Mirabal says. “Women with children, with their children on foot, children at their breast. The people are coming who are suffering just trying to find a better life.”

A family, not pictured, remains in a home in the village of Banderas, Choloma, near the northern coast of Honduras on April 8, 2021. Flood waters finally receded after hurricanes struck the region in November 2020, spurring migration northward.

Mercedes Morales walks through what remains of her home in the village of Aldea El Coowle, San Manuel Cortes, Honduras, on April 9, 2021. The house was completely destroyed by hurricanes Eta and Iota in November 2020.

In Honduras, the damage to homes and businesses from hurricanes Eta and Iota in November 2020, plus the impacts of COVID-19 have left an estimated 2.8 million people in need of humanitarian assistance, according to the United Nations Office for the Coordination of Humanitarian Affairs (OCHA). Even before the hurricanes struck, the number of family units from Honduras who were apprehended at the U.S.-Mexico border rose from 513 to 188,368 between 2012 and 2019, according to analysts at the Brookings Institute, a nonprofit research and policy organization. Brookings analysts also predict that the hurricanes caused an increase in migration from Honduras. In 2021, the number of Honduran family units encountered at the border rose from 1,968 in January, to nearly 25,000 in March, according to an analysis of CBP data.

A father helps his young daughter onto a train in Coatzacoalcos in the Mexican state of Veracruz on March 24, 2021. The train, also known as La Bestia, or “The Beast” is part of a larger network of cargo trains to which migrants cling onto in order to migrate north through Mexico.

A nine-year-old boy plays under the bridge in Coatzacoalcos in the Mexican state of Veracruz on ​​March 25, 2021. He and his family have been traveling for 16 days, 14 of which were spent walking, since leaving their home in Comayagua, Honduras.

Jesus Antonio Carrillo Mendoza, 28, takes a nap in Higueras in the Mexican state of Veracruz, on March 23, 2021 near cargo trains used by migrants to travel northward through Mexico. He has been traveling for 15 days since leaving his home in Comayagua, Honduras.

A mother helps her young daughter get off a train in Coatzacoalcos, in the Mexican state of Veracruz on March 22, 2021. Family units have been arriving at the U.S.-Mexico border at an increasing rate since January 2019, according to U.S. Customs and Border Protection data.

The Ramirez family rests under a bridge in Coatzacoalcos in the Mexican state of Veracruz on March 25, 2021 while waiting for a train they can jump onto that could take them north across Mexico. On this day, an estimated 450 people arrived hoping to do the same.

Edgar, 32, and Madelyn Fuentes, 20, rest in an abandoned house in Higueras in the Mexican state of Veracruz on March 23, 2021 after migrating for six days from Honduras.

Members of the Ramirez family walk along train tracks in Coatzacoalcos in the Mexican state of Veracruz on March 23, 2021. They fled their home in Santa Barbara, Honduras after their lives were threatened by gang members. Erica Ramirez is nine months pregnant.

La Bestia isn’t the only danger migrants encounter in Mexico. Whether migrants are traveling by train or other modes of transport, they are often targeted by members of organized crime groups who extort, kidnap them for ransom or rob them. Sexual assault is frequent. And at any point, migrants could be found by Mexican officials and deported. At the behest of the Trump Administration, the Mexican government began cracking down on migrants at its own Southern border. Though the Mexican government has in the past cooperated with previous administrations to try to stop migrants from crossing its southern border with Guatemala, Trump stepped up the pressure by threatening to impose tariffs and shut down the U.S.-Mexico border.

For those who do make it to the U.S.-Mexico border, the risks do not end there. Migrants have been the victims of a massacre along the border, allegedly by Mexican police. Human Rights First, a nonprofit advocacy and research organization, has tracked more than 6,000 reports of violence against migrants stuck in Mexico during the first few months of the Biden Administration alone.

“I’m not safe in my country nor in Mexico as a refugee,” says Carlos Roberto Tunez, a migrant from Honduras. He and his family fled Honduras in 2019 after they were threatened by gangs. The family first became official refugees in Mexico and were content with starting a new life there, he said. They opened a new business selling Honduran food. But after just a few months, members of an organized crime group began extorting them. When Tunez reported the extortion to Mexican officials, the organized crime group found out, and Tunez and his family found themselves on the run again, this time hoping to seek refuge in the U.S. At the time of his interview, Tunez and his family had been sleeping under a bridge in Reynosa for 10 days.

Cyndy Caceres, 28, and her four-year-old son pose for a portrait on May 4, 2021 in Reynosa in the Mexican state of Tamaulipas, a city across the border from McAllen, Texas, that has seen thousands of migrants arrive hoping to claim asylum in the U.S.

A train runs along the border between Brownsville, Texas, and Matamoros in the Mexican state of Tamaulipas on May 7, 2021.

For Tunez’s wife, Cyndy Cacares, it’s difficult to recount the journey. On May 4, Martínez showed Cacares a portrait he took of her and her son. It immediately brought her to tears. “My dream is to give my son a better life, and try to keep going” she said. “I can’t, I just can’t [talk] anymore.”

“It’s really hard for her to talk about this,” Tunez says. “We’ve suffered a lot on the journey here. It’s hard, and it also makes me want to cry having to recount the story… If myself from years ago saw myself now, he’d see someone very different. I’m here full of fear, full of terror more than anything because this is for my son’s life, my wife’s life.”

Write to Jasmine Aguilera at jasmine.aguilera@time.com.