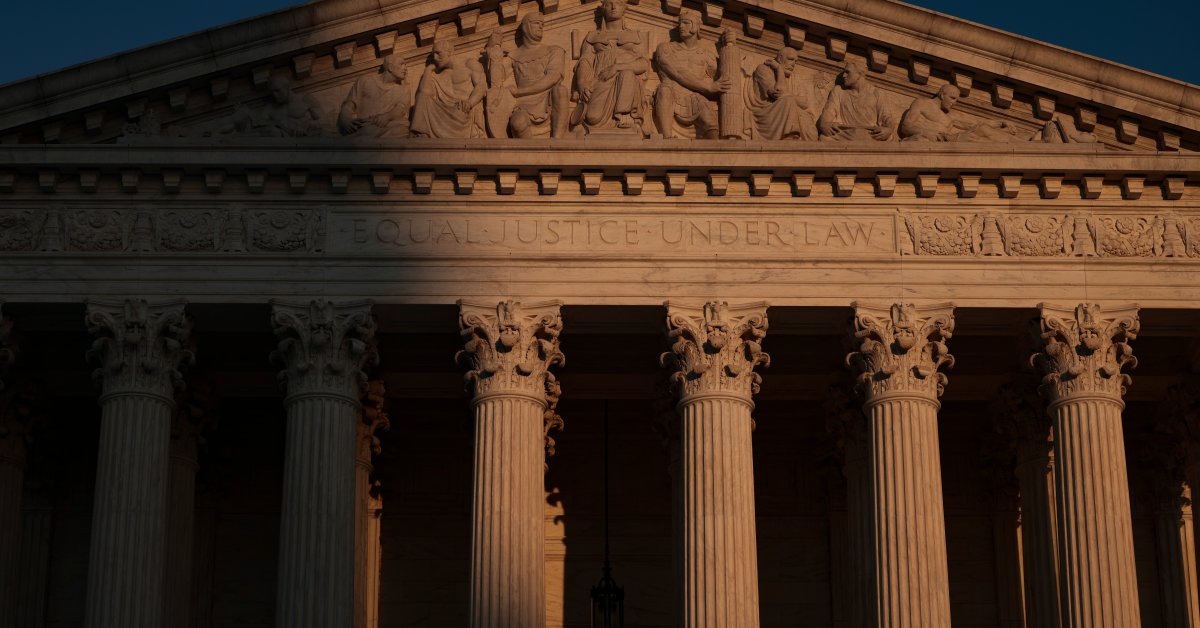 The U.S. Supreme Court on Friday declined for the second time to immediately block Texas’ six-week abortion ban, but said it will hear two separate challenges to the law from the Biden Administration and Texas abortion providers on Nov. 1.

The high court will not examine the question of whether the Texas law, known as SB 8, violates the constitutional right to abortion established in Roe v. Wade. Rather, it will consider the legality of the law’s unusual private enforcement mechanism and whether the Department of Justice (DOJ) and abortion providers can sue to challenge the law.
[time-brightcove not-tgx=”true”]

The court’s decision could have far-reaching implications for other civil rights protections across the country. Typically, a person wanting to challenge a law’s constitutionality would sue state officials for enforcing the law, but SB 8 was specifically designed to make this hard to do. The law prevents Texas officials from enforcing it, and instead allows any private individual to do so by filing a lawsuit against anyone who provides abortions beyond when fetal cardiac activity is detected, or against anyone who “aids and abets” someone in obtaining the procedure. Legal scholars warn that the enforcement mechanism, if held up by the court, could be used to target other civil rights across the ideological spectrum, including gun ownership or same-sex marriage.

Numerous advocacy groups have filed amicus briefs urging the Supreme Court to strike down what they argue is a blatant attempt to delay or completely evade judicial review. A brief filed by the gun rights group Firearms Policy Coalition, for example, argues the case “is important not because of its specific subject matter of abortion, but instead for Texas’s cavalier and contemptuous mechanism for shielding from review potential violations of constitutional rights.”

Texas abortion providers and the Justice Department have separately challenged the law, with both asking the Supreme Court to consider their cases after each were dealt blows by the Fifth Circuit Court of Appeals.

If the Supreme Court rules that DOJ and abortion providers cannot challenge the Texas law, the outcome would be “earth shaking,” says Mary Ziegler, a Florida State University law professor and author of Abortion and the Law in America. “If there’s no way to challenge SB 8-style laws, then there’s no reason for other states not to try to use a similar model.”

Florida has already introduced a bill modeled on SB 8 in its legislature and Republican lawmakers in other states including Arkansas, Missouri, South Dakota and Indiana have said they plan to do so, too.

The Nov. 1 hearing also makes the coming months an even more pivotal moment for abortion in the U.S. The court is already set to hear another abortion case on Dec. 1, Dobbs v. Jackson Women’s Health Organization, in which the justices will review a Mississippi law that bans most abortions after 15 weeks. Abortion opponents hope that case will overturn Roe. While the Texas case is unlikely to strike directly at Roe, it will provide insight into how the Supreme Court is thinking about the topic and could have implications for how the courts handle abortion laws across the country.

Even if SB 8 is ultimately declared unconstitutional, the risky process of challenging it has created a “chilling effect,” says Scott Anderson, senior editor of Lawfare and a visiting fellow in Governance Studies at the Brookings Institution. Texas officials have said that in order to challenge the constitutionality of SB 8, someone must first take on the risk of providing abortions beyond what the law allows, get sued and then challenge that lawsuit.

“Realistically a lot of providers might not be willing to undertake that sort of risk,” Anderson explains. If other states follow that model, they could potentially enact their own laws that in the “short to medium term” infringe upon constitutional rights, “precisely because they can’t be subject to judicial review, even if in the long run those statutes are ultimately invalidated.”

Read more: The Fate of Roe v. Wade May Rest on This Woman’s Shoulders

Until the Supreme Court weighs in, SB 8 will remain in effect in Texas, severely limiting abortion access for millions of people. Justice Sonia Sotomayor was the only member of the Court to dissent from her colleagues’ decision to leave the law in place on Friday. “There are women in Texas who became pregnant on or around the day that S. B. 8 took effect,” she wrote. “Women seeking abortion care in Texas are entitled to relief from this Court now. Because of the Court’s failure to act today, that relief, if it comes, will be too late for many.”

Abortion providers initially tried to challenge the law before it went into effect on Sept. 1 by suing a collection of state judges, clerks, officials and an anti-abortion activist, but the Supreme Court refused to block the law, citing “complex and novel” procedural obstacles and saying it was not clear the providers had sued the right people.

The Department of Justice then challenged the unusual enforcement mechanism, saying its responsibility is to maintain the integrity of the federal legal system, which it argues SB 8 undercuts in a way that is “as breathtaking as it is dangerous.”

Ziegler argues that the fact the other liberal justices who joined Sotomayor in dissenting in September did not join her on Friday could indicate that they expect the court block the Texas law relatively soon, on the basis of its highly irregular enforcement mechanism.

“I don’t think it’s because Justices Breyer and Kagan all of a sudden were convinced that SB 8 was constitutional,” she says. “I think there must be some sort of sense that they’re trying to maximize collegiality and institutional peace ahead of a ruling they’re going to like.”

Read more: What We Fear in the Wake of the Texas Abortion Law

While the two challenges to Texas’ law have been bundled together, Ziegler and other legal experts say their different approaches may give the Supreme Court more ways to invalidate SB 8. “Allowing state and federal lawmakers a way around judicial review of what seemed to be unconstitutional laws would be a really big deal,” says Ziegler, “which is one other reason I think you might wonder if that’s a result the Supreme Court would want to reach, no matter what they think about Roe v. Wade.”

Once the Supreme Court hears oral arguments on Nov. 1, its decision could come any time—even potentially before it hears arguments in the Mississippi case in December.