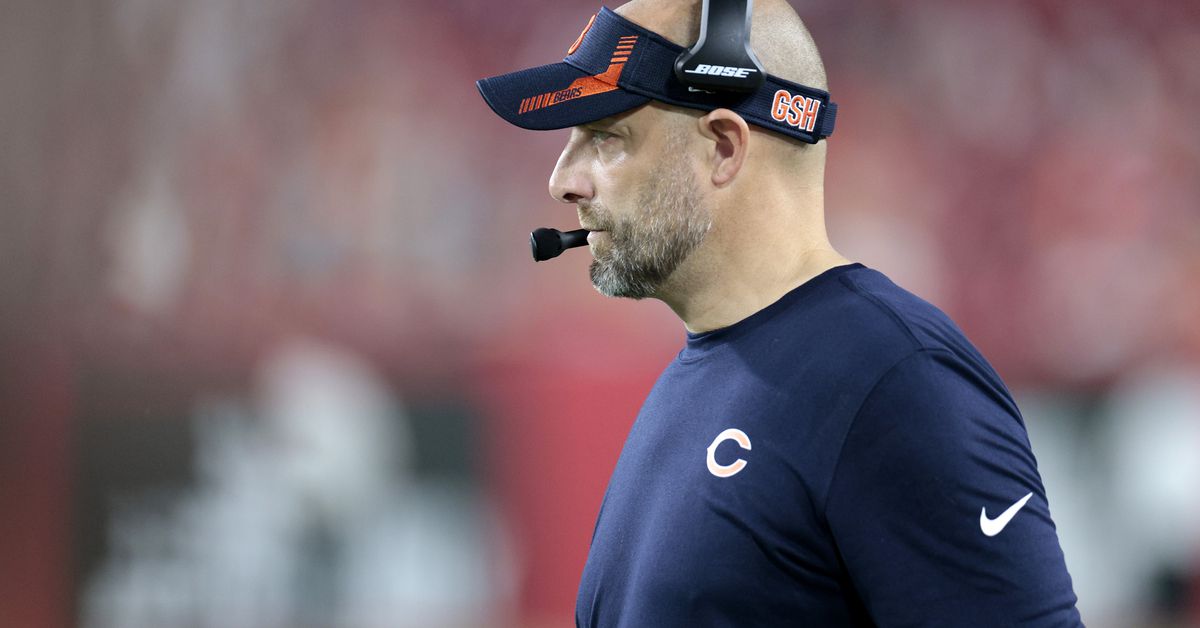 More than merely affecting our sports, the virus has deepened the political divide in our country.

This era will be defined by two things: the COVID pandemic and the splitting of America into two warring camps.

Say what you will about the limits of disease and politics, but they now infest everything around us, including the usually upbeat, impassioned, cheery world of sports.

On Monday, we found out Bears coach Matt Nagy has COVID. He will need two negative tests 24 hours apart to be able to return to Halas Hall and/or coach Sunday against the 49ers.

No jokes here about how the 3-4 Bears might be better off without Nagy permanently (although I’ve got a couple).

The coronavirus blasted into our world at the start of 2020, and it began devastating our comfortable sporting life right then.

Remember the NBA’s delayed ‘‘bubble’’ resumption? Remember NFL stadiums with nobody in them? Remember high school sports tossed to the wind, scholarship possibilities destroyed, teenage athletes lost in the vacuum?

Do you recall that by May 2020 colleges had eliminated more than 100 sports programs, citing money issues caused by the coronavirus as the reason?

Nagy quite often is maskless, as most of us are now, since the latest wave of COVID that struck hard this summer seems to be on the decline. But did he infect anybody else? Will he?

Who knows? We can’t see this thing. We can’t see those little bits of brainless RNA that Stanford professor and researcher Dr. Michael Lin described as existing ‘‘in this grey zone between living and dead. They’re alive in a sense that they can reproduce, but [they] depend on a host.’’

That host would be us.

Which brings us to NBA star Kyrie Irving, the player who won’t get vaccinated and therefore can’t play for his Nets at home or in other states where proof of vaccination is needed to enter a public arena. The Nets recently said he can’t practice or play with them at all, anywhere.

Why won’t he get vaccinated?

Those of us who are logical might say it’s because he’s stupid or insane. In reality, he doesn’t seem dumb or disturbed. No, it’s more that he’s bound up with the conspiracy nuts and their disinformation that flies through the internet and spreads like, well, a virus.

Don’t forget Irving once famously claimed Earth is flat. (Even though he attended Duke for only a short time, you have to wonder how Duke feels about his ‘‘education’’ there.)

Nor is he without influence off the court. As the vice president of the executive committee of the powerful players’ union, Irving has a voice that matters.

As a result, Irving supporters stormed the Barclays Center in a near-riot Sunday, tearing through metal barricades while screaming that Irving must be free and allowed to play. The arena was put on lockdown for two hours before it reopened for the game.

Yes, this was reminiscent of the Capitol insurrection Jan. 6 in Washington led by Donald Trump supporters. There was a fascinating difference this time: There were Trump advocates in the protest, but there also were Black Lives Matters supporters, the two formerly being avowed foes.

This is what disinformation can do.

Nor does this have anything to do with personal freedom. In a democratic society — one with running water, electricity, highways, police, schools and, yes, pro sports — we all give up a vast amount of personal rule. Don’t think so? Try running through metal detectors at the airport, driving 130 mph on an interstate or performing surgery without a medical license.

Irving has ‘‘liked’’ and engaged with online platforms promoting the theory that ‘‘secret societies’’ are implanting vaccines in a plot to connect Black people to a master computer for ‘‘a plan of Satan.’’

Black Hall of Famers Kareem Abdul-Jabbar and Charles Barkley have ripped Irving’s essential nonsense. As Barkley put it, regarding team, family and societal responsibilities: ‘‘You don’t get vaccinated just for yourself.’’

People who don’t believe in science can’t be dissuaded with reason. They only will take advice from whomever or wherever they got their disinformation in the first place.

That vaccines keep measles, mumps, diphtheria, polio and so many other pandemics from occurring means nothing to vaccine deniers or the virulent ‘‘vaccine-mandate protesters.’’

Nagy has urged all his players to get vaccinated, and almost all of them have. But even the vaccinated face some risk. Much less risk, but some.

The thing is, much more than our sports world is coming apart because of this pandemic and its resisters.