About 36% of transgender persons had undergone a dermatologic procedure, with hair removal by far the most common, according to the results of a recent survey.

Transfeminine persons – those assigned male at birth – were much more likely to report a previous dermatologic procedure, compared with transmasculine respondents, by a margin of 64.9%-7.5%, Laura Ragmanauskaite, MD, and associates reported. 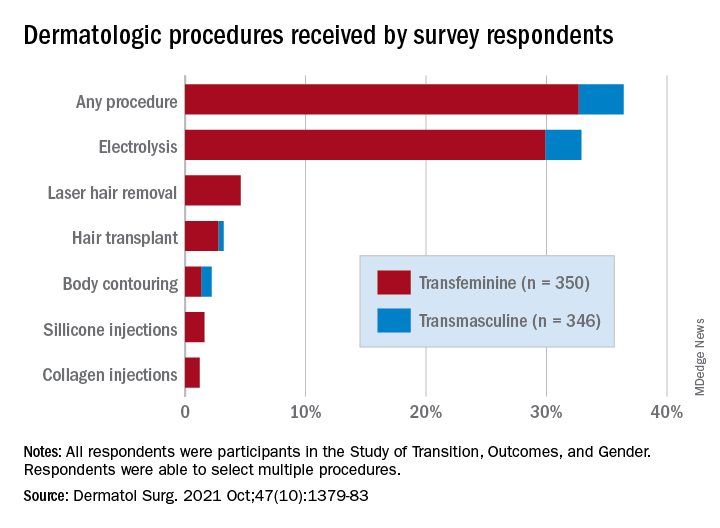 Just under one-third of all respondents (32.9%) said that they had undergone electrolysis and 4.6% reported previous laser hair removal. For electrolysis, that works out to 59.4% of transfeminine and 6.1% of transmasculine respondents, while 9.1% of all transfeminine and no transmasculine persons had received laser hair removal, Dr. Ragmanauskaite of the department of dermatology, Emory University, Atlanta, and her coauthors said.

Those who had undergone gender-affirming surgery were significantly more likely to report electrolysis (78.6%) than were persons who had received no gender-affirming surgery or hormone therapy alone (47.4%), a statistically significant difference (P < .01). All of the other, less common procedures included in the online survey – 696 responses were received from 350 transfeminine and 346 transmasculine persons participating in the Study of Transition, Outcomes, and Gender – were reported more often by the transfeminine respondents. The procedure with the closest gender distribution was body contouring, reported by nine transfeminine and six transmasculine persons, the researchers said.

Use of dermal fillers was even less common (2.8% among all respondents, all transfeminine persons), with just 11 reporting having received silicone and 8 reporting having received collagen, although the survey did not ask about how the injections were obtained. In a previous study, the prevalence of illicit filler injection in transgender women was 16.9%, they pointed out.

These types of noninvasive, gender-affirming procedures “may contribute to higher levels of self-confidence and [reduce] gender dysphoria. Future studies should examine motivations, barriers, and optimal timing” for such procedures in transgender persons, Dr. Ragmanauskaite and associates wrote.

The authors reported that they had no relevant disclosures.