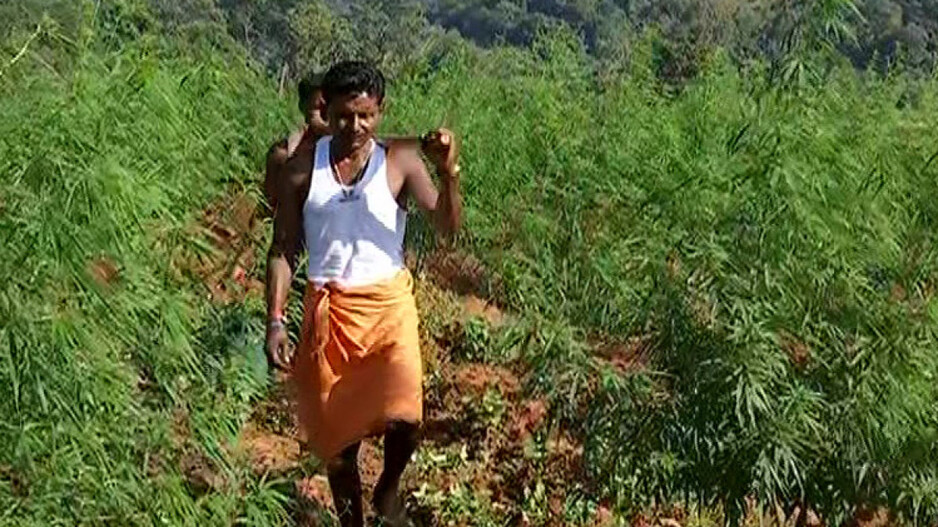 Hactares and hactares of illegal ganja cultivation will greet as one goes deep into the Swabhiman area, the erstwhile cut-off area of Chitrakonda block in Odisha’ Maoist infested Malkangiri district.

While the district administration and Police have been wiping off these cultivations under a special drive, they again come up in no time, thanks to the irresistible urge of the local tribals to grow the plant.

In an unprecedented turn of events, hundreds of tribals from 30 odd villages under Dhuliput and Ralegarh panchayats in the Swabhiman area took out a protest rally on Thursday demanding the administration to allow them cultivate and sale ganja.

Ganja smuggling, a major source of income of the Maoists for funding their activities, has been on the Police radar since years. In fact, under a special drive, the police have destroyed many fields of cultivation by the locals who usually sale it to the ultras in exchange for some money. The Maoists then sale it in other parts of Odisha and other States earning huge profits in the process.

However, the local tribals did not seem to be too much pleased by the crackdown because according to them ganja cultivation is the only source of income they have at hand. “Being a hilly and remote area, not much grows in here and whatever we grow, we do not get the actual returns. Almost all vegetables growers and farmers have to resort to distress sale of their produce due to unavailability of market,” the tribals alleged.

So much so that, the locals have fixed the rates of their products; Turmeric at Rs 300 per Kg, tamarind at Rs 100, black pepper at Rs 1000, ground nut at Rs 200, Ragi at Rs 50, ginger at Rs 150 and coffee at Rs 500 per kilo. They have demanded that they can stop farming ganja if the government buys their produce at these rates.

Kamulu Hantala, former Sarpanch of Ralegarh who led the protest march said, “We want to convey the message clearly to the administration that we will stop farming ganja only if the government provides us the rates for our products which we have fixed.”

It may be out of sheer greed or the fear of Maoists, but the tribals have now found themselves caught between law and livelihood. If they chose life and shun ganja cultivation, their source of income will dry up and vice versa.

Citing his helplessness, a local at Ralegarh said, “We do not get enough money from the traditional farming here. Ganja brings us some money to sustain in this hilly terrain. If the government wants to shut down our only source of income then they should understand the ground reality first.”

Asked about the plight of the locals, the Excise Superintendent at Malkangiri, Arun Kumar Padhi said, “The district Collector has been intimated about their situation. A plan is on card to provide the tribals with alternate livelihood with the help of several NGOs who will provide them markets to sell their product.”

It is worthwhile to mention here that, following the construction of Gurupriya bridge in Chitrakonda, not only Maoist violence has come down in that area, the Police have found it easy to crack down on ganja cultivation. As per reports, as many as 143 acres of illegal ganja cultivation has been destroyed by the Police and Excise department so far. And the drive will continue till January next year.

There are locals who have already migrated to vegetable farming from ganja in the area. But there are still a large chunk of tribals who want to hold on to illegal ganja farming for money.